I was excited when Canon and Nikon both announced their mirrorless pro (or semi-pro) cameras last fall. The time had come. Sony has been in the market for three generations now, and Canon had made a few attempts (EOS M, etc.) at mirrorless devices. I bought two EOS M cameras, which I like a little bit, but they have frustrating controls and they are difficult to use in sunlight (they have no eyepiece viewfinder, only an LCD which is useless in bright light). Those cameras are gathering dust on my shelf now. 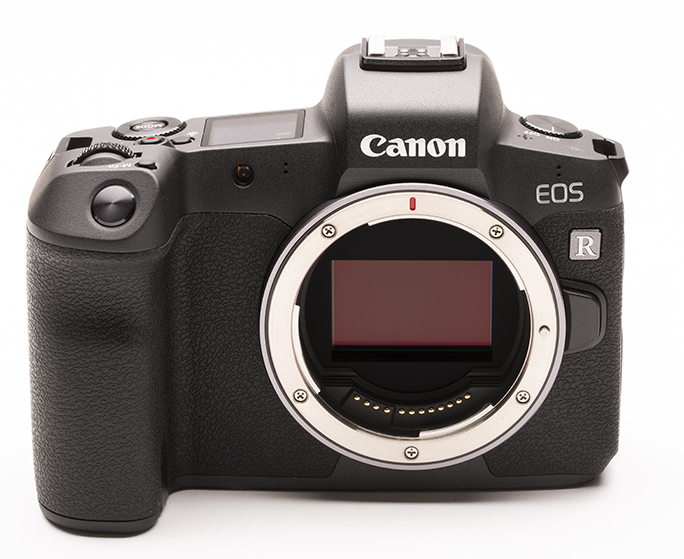 This is the new camera in its first few minutes out of the box. I am excited to learn more about it, and I am sure I will be happy with the silent feature!

I shoot a lot of classical music concerts, and for me the most exciting feature of mirrorless cameras is the ability to shoot in absolute silence. I am usually taking photos from inside the performance hall, and I am hampered by shutter click-clopping. I thought the Sony would be great for this because it can shoot in silent mode.

I rented a Sony mirrorless camera last summer for the music festival, and it frustrated me. Battery life was ridiculously short, some of the menus are incomprehensible, some of the controls are in places where no human can operate them, and overall, I found the Alpha 7 to be an uncomfortable camera to use. (You’ll get used to it! They told me. I didn’t.) I loved the high resolution sensor and the resulting photos, but it was too difficult for me to use.

I clamped the Sony high on a wall and put it on radio control using Sony’s nice iPhone app. This required a ladder and a very early arrival at the concert location. I practiced and it worked beautifully. But the battery died before the concert began and I got nothing. Assault by battery.

The new Canon EOS R is also capable of shooting in silent mode. I rented one for a week in February from my friends at Borrow Lenses dot com. I decided to give it a try.

In the short time between the UPS truck’s arrival and the beginning of the Bach Cantata, I figured out enough to set the camera to Silent mode, to figure out how to use the basics, and I began shooting. Where normally I shoot with my Canon 5D Mark III cameras, I wait for the fortissimo parts so that the audience is unaware of my noisy shutter. With a solo violin there are few fortissimos, so I would not have gotten much on this occasion. But the R makes no sound, so I shot like crazy! I took 600 photos in 90 minutes. Part of this was to experiment with the silent operation, part of it was to become familiar with the location of the controls, and to learn how to shoot with this new device.

I also experimented with all of the available ISO settings – all the way up to 26,500. I seldom shoot with high ISOs because of the noise, but on this occasion I let those constraints fall by the wayside and used the camera to explore every nuance of the performance. 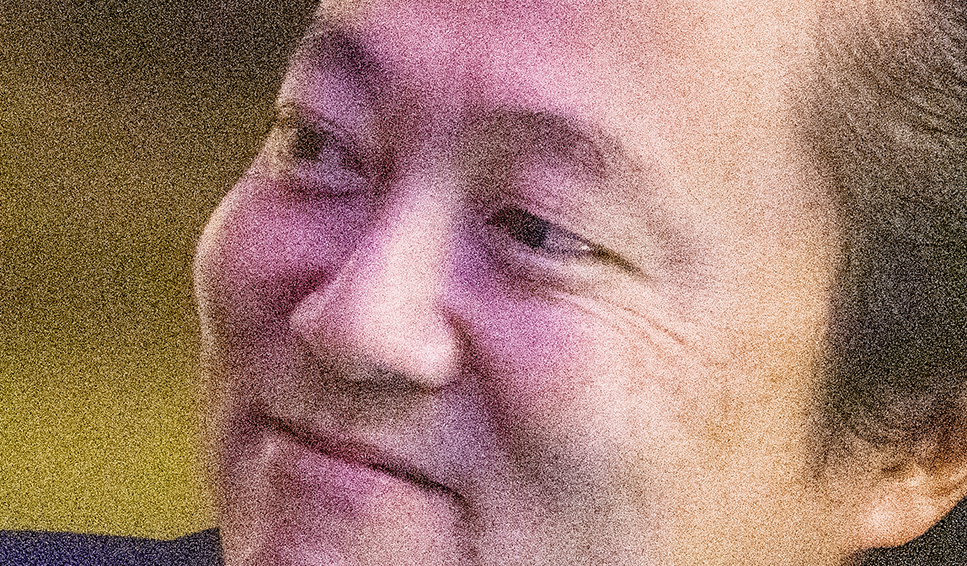 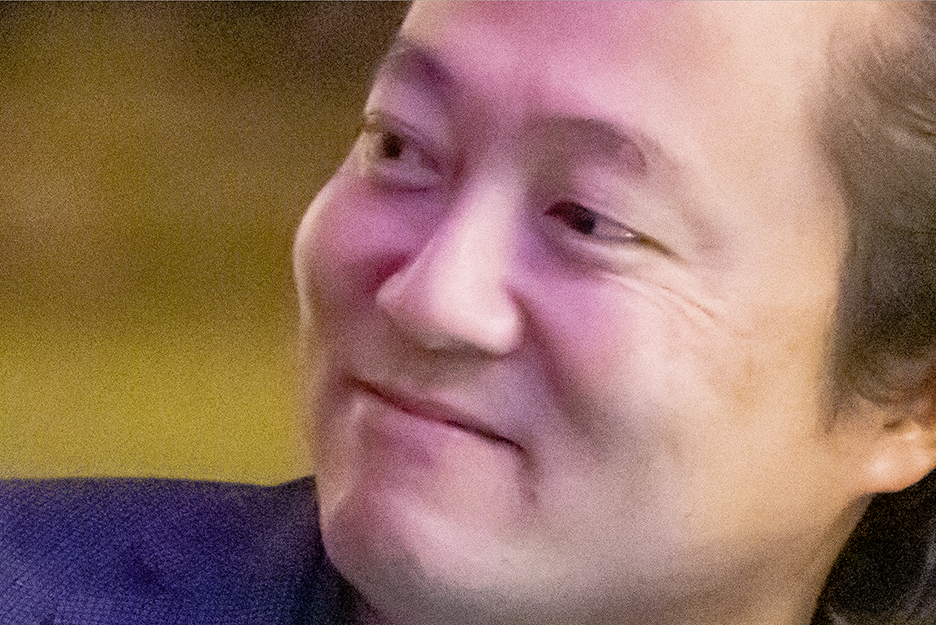 These images show the before-and-after of noise reduction in Adobe Camera Raw. I shot both under poor lighting circumstances at a private residence. The ISO was set to 26,500. Then I applied noise reduction in Camera Raw. These are enlarged substantially, probably 4X normal (it’s a bit hard to show this kind of thing on a web site). The image is of Scott Yoo, Music Director and violinist, of San Luis Obispo’s Festival Mozaic.

Over the next four days I shot several thousand more photos in three other locations. I learned to love the electronic viewfinder. I discovered that I can focus better in low light cirsumstances with that viewfinder than I can with my optical viewfinders on the 5D cameras. I enjoyed being able to see clearly what the shutter speed and aperture are. I loved the display of information inside that little window.

I tried portraits in the sudio at the university, but was frustrated there. I couldn’t shoot with strobe lights in an otherwise unlit studio; it was too dark for the electronic viewfinder on the R. I plan to explore this further, and I will write about that separately.

When my week of rental was up I returned the camera to Borrow Lenses, and I went back to my regular, boring life.

I experimented with my high ISO shots from the R. I discovered that even at ISO 26,500 I was able to get reproduction quality images. I found that much of the noise, though quite significant, can be removed in Adobe Camera Raw, making the images usable at that very top ISO setting. These images are better than I get when I shoot at lower ISOs on the older 5D cameras. I attribute this to Canon’s improved Digic chip in the EOS R. It’s two generations newer and more sophisticated than my other two cameras.

I found myself longing for the R, and planning for my summer music festival shooting. Should I rent again or should I just break down and buy one? I chose the latter, and last week my R showed up on my doorstep. I was so excited! I left it in the box for a whole day, then I set up a tabletop studio in the dining room before I took the plastic bag off the camera body.

A camera is only clean once, and I wanted to photograph this one while it was still absolutely pristine. This was fun. I had not even installed the battery and I was taking portraits of this new camera to illustrate this article.

I also got the 626-page instruction manual, and started poring over that to learn about the buttons and menus and controls. Where is the depth-of-field preview button? Oh, you can program that into one of several programmable buttons or the strange multi-function bar on the top-right on the back of the camera (I haven’t found anyone yet who says that’s a nice thing – except Canon).

I watched a multitude of YouTube videos made by Canon and by reviewers who are doing what I am doing – testing to see how we like the new camera. Many do like it, some don’t. Most of the photographers who were expecting a great video camera in the R are disappointed by its cropping of the sensor when shooting in 4K. I’m not a video guy, so I let that shortcoming pass me by. Most pro photographers agree that this is a nice camera, and that Canon has broken new ground with this one. Most are also saying that we will see more from Canon on the pro mirrorless front; this is inevitable. Some are waiting until Canon comes out with the next mirrorless offering, which will be much better.

I have mine now, and I am quite pleased by its silent shooting mode, its seamless ability to use all of my current lenses (I can’t afford the new R-series lenses!). This will be a great camera for me and my music festival work, and I will follow up with more reports on how the camera behaves in various shooting situations.

I think it’s a nice camera, and I am looking forward to using it a lot during the summer festival. I’ll probably shoot a few thousand cellist photos with it (and a few hundred French horn players too!). And no one in the audience will be bothered by my camera’s noisy shutter. That is a thing of the past.