The Cal Poly TAGA team has won the prestigious Helmut Kipphan Cup at this year’s conference of the Technical Association of the Graphic Arts.

The Kipphan Cup is awarded to the university team whose technical journal is judged to be the best entry in the annual event. Scoring in based on technical writing, design, production quality and the quality of an online component that supplements the journal. 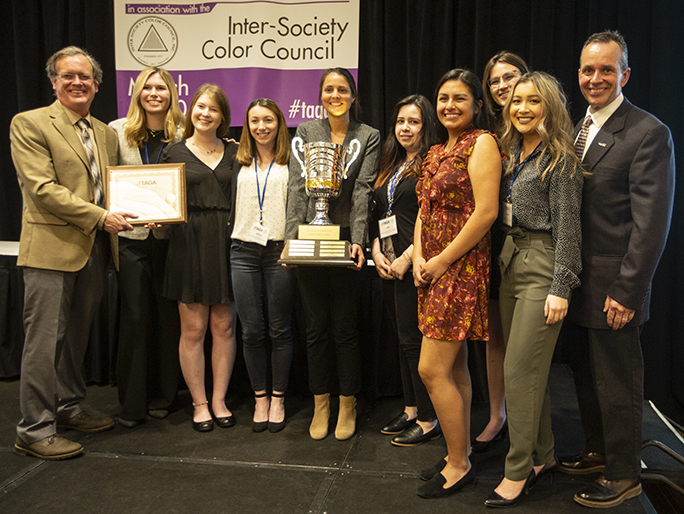 The TAGA journals are expected to be produced by students, if possible, and the Cal Poly team did all the work, from cutting paper to binding and packaging the final works. Hundreds of hours of work are spent each year in production, and this year’s journal featured several complex printing processes that helped to distinguish the finished work. The students wanted to deboss the separator pages of the journal, and to do that, they cut polystyrene printing plates on the Kongsberg iCut machine, a computerized cutting and prototyping machine made by ESKO. Those polystyrene plates were then mounted on wood blocks for the printing press. Students used a 1960s era Heidelberg “Windmill” press to perform the debossing on their pages. 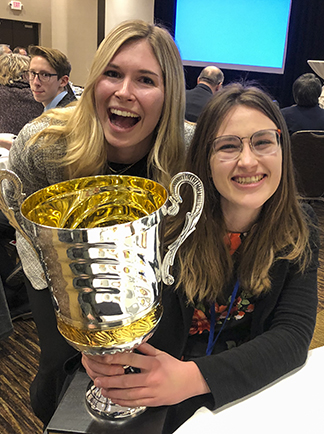 The TAGA journal was printed by electrophotography on a Konica Minolta C1100 digital press in the Graphic Communication Department. That machine produced the full-color components of the book. The covers were also printed on the Konica Minolta machine.

After printing, the covers were enhanced with gold foil and clear digital embossing effects using an MGI finishing machine. Each journal cover went through several steps of post-press finishing to make the covers look and feel more impressive than a simple printed sheet. The students also personalized each copy of the journal with the judges’ names; this was also done in the MGI digital foil machine.

Hannah Nguyen, the Design Director for this year’s journal, took advantage of the many printing technologies available to the students to produce a beautiful book. Many processes were used: electrophotographic printing, digital embossing, digital foil enhancement, letterpress debossing, letterpress scoring, perfect binding and trimming on the department’s Polar computerized paper cutter. It was an impressive amount of work, and the students had the opportunity to learn by doing (Cal Poly’s motto) as they produced their award-winning journal. 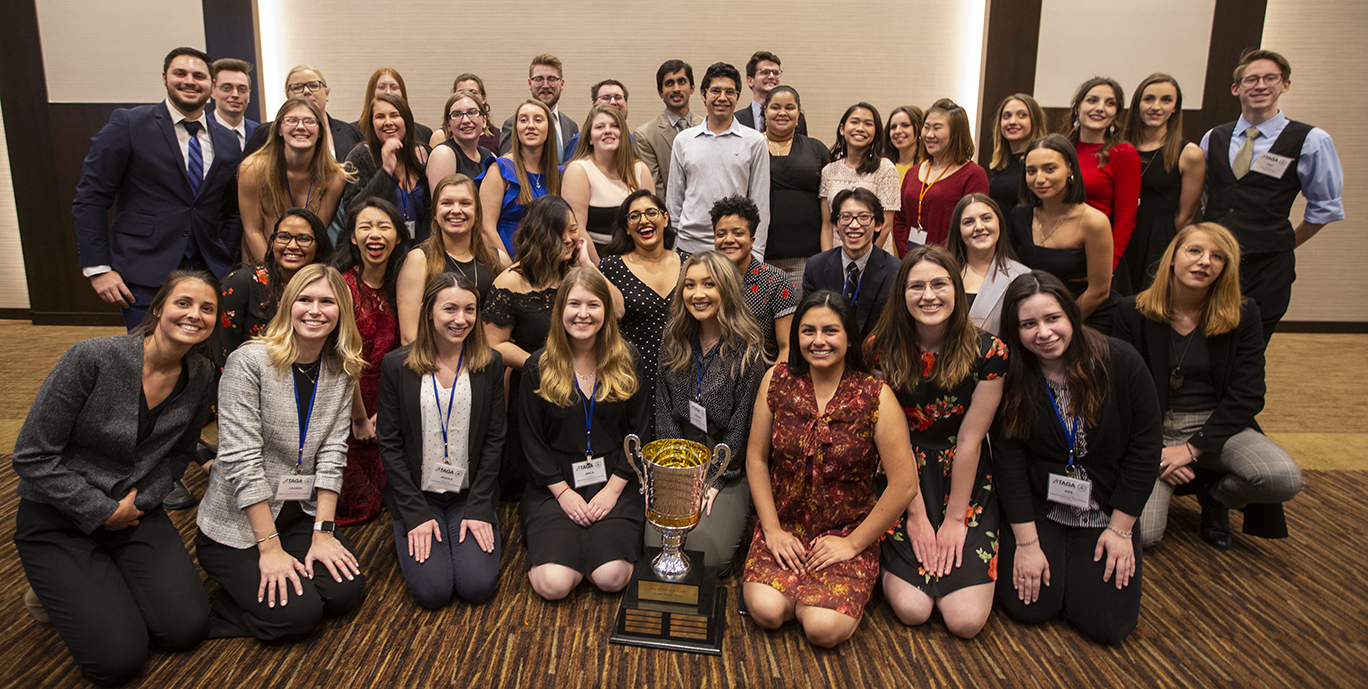 All of the TAGA university students assemble for a group photo.

At the conference, held this year in Minneapolis, Minnesota, eight Cal Poly students were in attendance. The students attended numerous conference technical sessions, a student banquet, and attended several sessions where they met and mingled with the students from the other universities who attended the conference. Universities represented included Clemson (Clemson, SC); Ryerson University (Toronto, Canada); PEGORA (Grenoble, France); Rochester Institute of Technology (Rochester, NY); and Ball State University (Muncie, IN).

This is Cal Poly’s second win in three years. The students have possession of the Kipphan Cup for the year, and it will be on display at Cal Poly in the Graphic Communication Department.

Work has already begun on the TAGA student journal for 2020. A new team is being assembled, designs are being prepared, and the presses will be running soon! Cal Poly’s victorious TAGA students are excited to develop and print the next journal for the competition next year.