After spending five months in Germany, teaching, learning, and exploring the region, we have returned to the U.S.A.

It was a wonderful experience, one that I would repeat anytime if I could. During this time I was an employee of the Federal Republic of Germany, an honor for me (I was supported by a grant from an organization called DAAD, funded by the government).

It has been especially nice to be teaching typography in the country where it was invented, and where the industry is thriving today. Want to see a Gutenberg bible? Germany has 12 of them! Want to see a limestone plate made by Alois Senefelder himself? Munich has many of them! Want to visit a paper-making factory running a 120-year-old Fourdrinier machine? Germany has several of them! Germany is field trip heaven for a college professor. I took the students to the Heidelberg press factory, and I took them to the Gutenberg Museum in Mainz to see the two Gutenberg bibles there. We visited the Bavarian office where the Senefelder litho plates are stored (we did that on bicycles and public transportation). 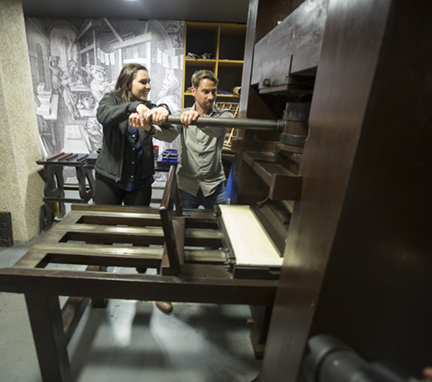 Emily Hoehenrieder and Martin Hämmerle make an impression on the replica press at the Gutenberg Museum in Mainz. They made a page of letterpress printing that is similar to the pages in the original Gutenberg bibles.

I would like to think that I challenged them; I know that they challenged me.The Munich University facilities were great for the courses that I taught. I was teaching on Windows – in German – using familiar Adobe applications. What saved me was the keyboard commands. I use the Creative Suite so much that I have memorized the keyboard commands, and those work in German just like they do in English (thank goodness!). 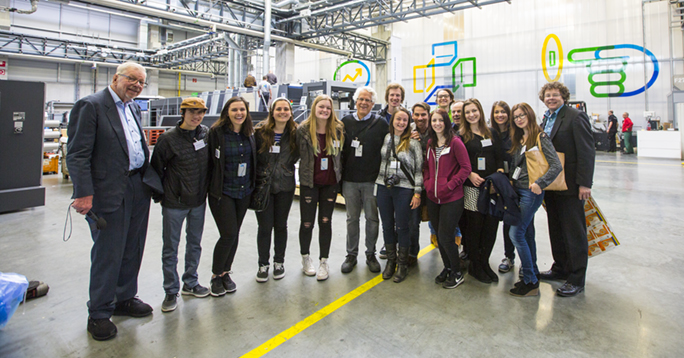 The students from Hochschule München at the Heidelberg printing press factory outside Heidelberg. Leading our tour, on the left, was Gunter Wittich, a longtime Heidelberg executive who is now retired, but returns to give tours of the facility from time to time.

Living in Munich was a life-changing experience. I have never lived in a big city (except Oakland, where I was born – but I left 50 years ago), so learning how to navigate in Munich was a great experience for me. They have S-Bahns, U-Bahns, and Deutsche Bahns (various kinds of trains); they have streetcars (called trams), and I realized after several months in the city that I had not been in an automobile for a long time (it was a relief). I was still paying for two automobiles in California, both of which were in storage, but I was not driving them, of course.

Now that I am home in San Luis Obispo, I have spent the days turning things back on: my printers, my insurance policies, my desktop computer. I am not going to turn cable TV back on, because I have discovered that I don’t need it anymore (and they are the utility I love to hate). I am not going back to AT&T because it’s too expensive. Mobile phone service in Germany is about $10 per month; here, the same service is about seven times that much on AT&T. I had such a great experience with T-Mobile (called Telekom in Germany) that I’m going to give them a try here. We’ll see how that goes (at only four times the price of German service).

I never got sick while in Germany, but managed to catch a nasty cold on the flight home, so I have been spending time in bed, and I’ve been using a lot of over-the-counter cold remedies. I feel lousy, but I will get better – I have to get on a plane again tomorrow to fly across these United States. I hope I don’t get a double-cold!

The Blognosticator is changing back to its original flag (without the German colors), and will continue as before. I thank my readers for sticking with me over the years. There will always be more to read here, so stop by from time to time.

Brian Lawler is an Emeritus Professor of Graphic Communication at California Polytechnic State University, San Luis Obispo and was a Guest Professor at Hochschule München from September, 2021 to September, 2022. He writes about graphic arts processes and technologies for various industry publications, and on his blog, The Blognosticator.
View all posts by Brian Lawler →
This entry was posted in Adventures, History, Panoramic Photography, People, Photography, Printing and Printing Processes, Technology, Typography and tagged Blognosticator, Brian Lawler, Germany, Gutenberg, Heidelberg, Hochschule Munchen, Munich, teaching in Germany. Bookmark the permalink.