At least in Germany it’s not.

As I stepped off the train in Heidelberg last Monday afternoon an American asked me for directions. At this I was not very helpful because he and I had been in Heidelberg exactly the same length of time – about ten seconds.

We chatted as we walked into the station. He mentioned that he was visiting the city where his parents met 60 years ago. I told him I was there to visit the printing press manufacturer named after the city we were visiting.

He lamented that publishing is dead. So sorry, he said. He, himself once helped out on a press. Did I know that the press operators used to know just how much ink to add to a unit to get the color right? Yes, I admitted that I knew that, and I had done that very thing myself.

We said our pleasantries and parted ways, he to find the place of his parents’ meeting, and I to the Schnellpressenfabrik to see multimillion-dollar printing machines assembled and prepared for their new owners around the world. 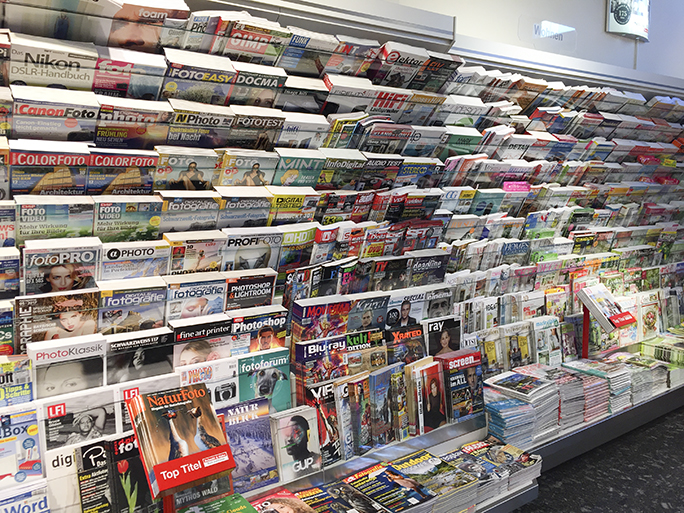 This is a small selection of the many, many magazines for sale at the bookstore located in the Heidelberg Hauptbahnhof. There were another five racks this size in the store. This is eye-candy for printers!

A few minutes later my wife and I visited a nice magazine store in the Heidelberg Hauptbahnhof; we were both looking for something to read – an English language magazine perhaps. As we wandered the aisles in the store I realized that I was standing in the middle of a well-stocked example of the fact that publishing is not dead. I snapped a few photos with my iPhone, while admiring the retail end of the publishing industry.

I am going to take a guess that this single store had over 1,000 magazines for sale. In the photo section where I was standing, there were 49 magazines in German on the subject of photography. There were several in other languages also, but they were in the foreign languages section, which featured another 150 titles.

I walked around and picked a beautiful tourist magazine about the city of Heidelberg. I picked that up and decided to buy it. I also grabbed a copy of the week’s Economist, printed in England (I think) for the European market. I get this magazine back home, and I think that the American edition is printed in the U.S.

I reflected on the man’s comments just minutes earlier on the train platform. So sorry. And I realized that he is absolutely wrong. Ill-informed is probably the better term.

I wondered to myself where he had read that publishing is dead.

Probably in a magazine.

The next morning my wife and I were treated to a tour of the huge Heidelberg printing press factory in Wiesloch-Walldorf just outside Heidelberg. There we saw presses large and small – even the small presses are large these days. We were taken to a building 620 meters in length and 120 meters in width where the presses are assembled. It’s a combination assembly line and individual assembly facility where 4,000 printing units are made each year and shipped around the world. 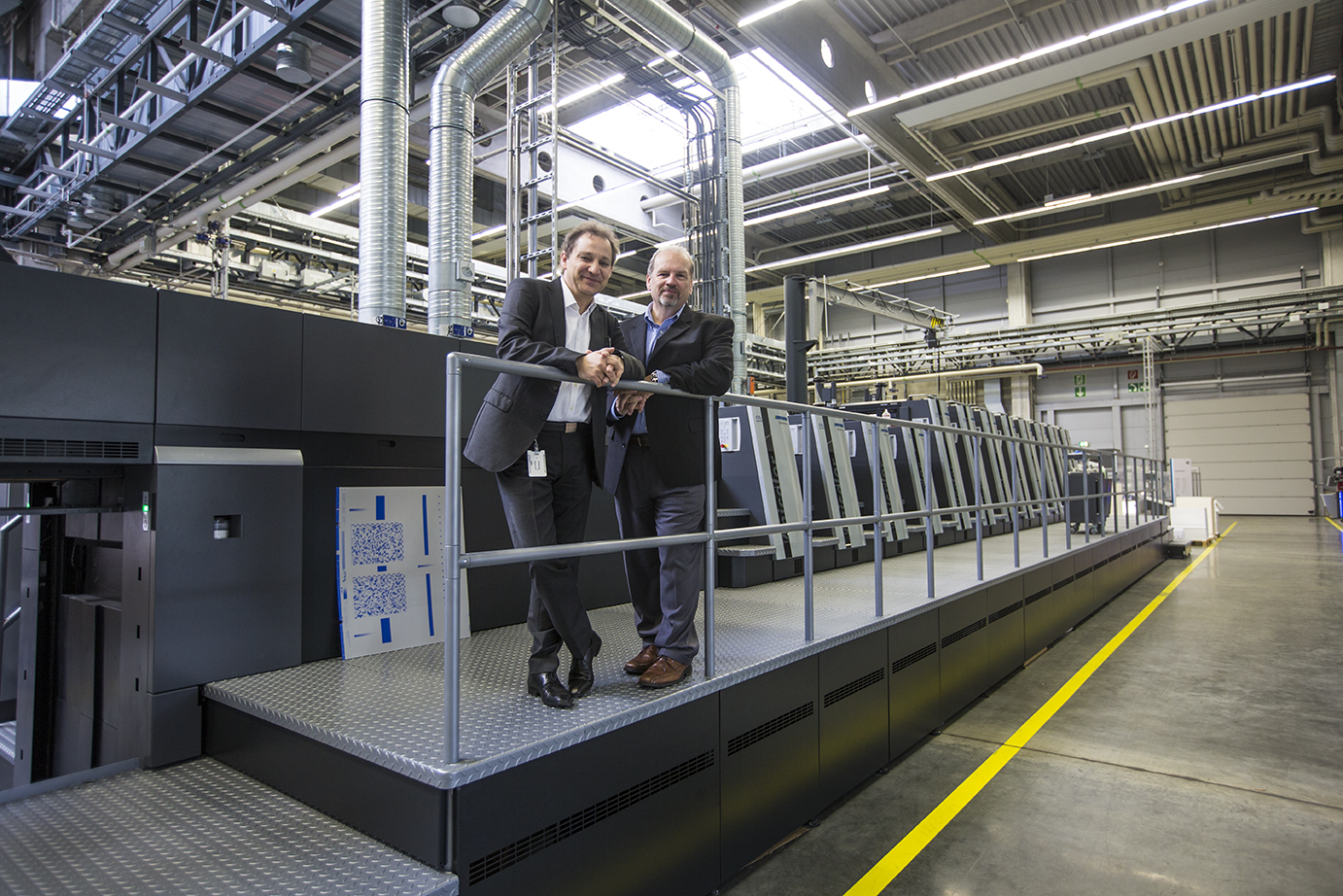 Ralph Schönfeld and Clarence Penge, our wonderful hosts at the Heidelberg plant in Wiesloch, outside of Heidelberg, Germany. They are standing on a press with eight printing units and four coaters. The machine is 93 feet long. It will be used in a packaging plant.

We visited the gear-making building and saw the production area where cast steel components are machined to a precise size, then measured for quality-control on their way to final assembly in a huge multi-color Heidelberg press.

We walked through and over a printing press so large that the feeder is way over my head. This one is destined for a packaging printer in North America. It is over 90 feet in length. The press sheet it prints is 63 inches in width. I suspect that some of the magazines I saw in the bookstore are printed on machines like this (actually it’s more likely they are printed on the smaller 40-inch machines). 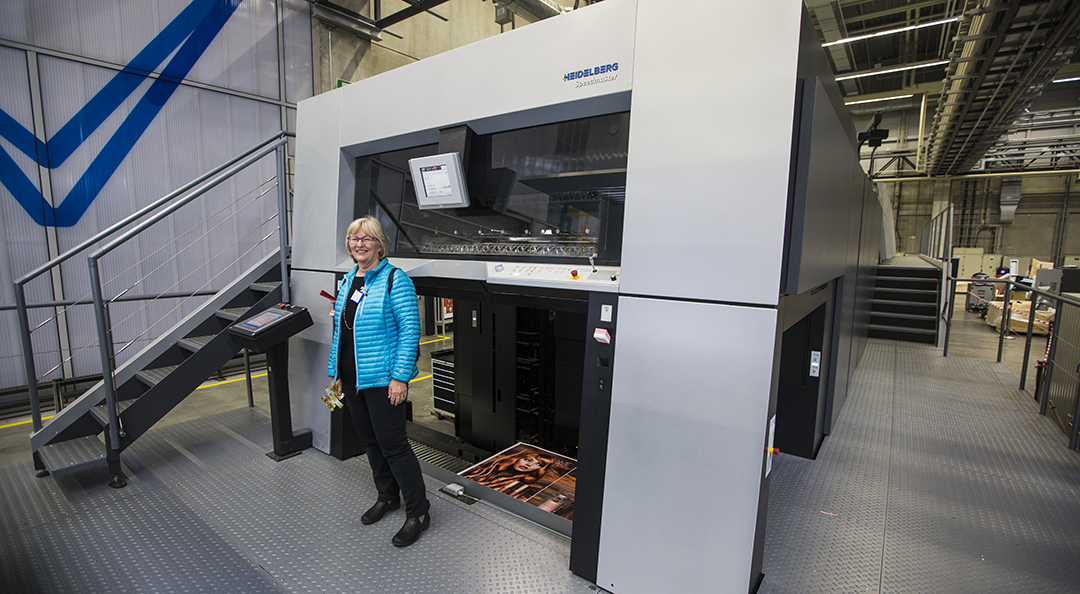 My wife Ashala stands at the delivery of one of the huge Heidelberg presses in the demonstration room in Wiesloch. This machine prints on sheets of paper over five feet in width. It is also the fastest press made by Heidelberg – it prints up to 18,000 sheets per hour, which translates to five sheets per second. The amazing thing about this press is that it’s designed to be operated by only two people.

I came away from this experience knowing that printing (and publishing) are doing pretty well. After some lean years fighting our way through the recession, the industry is on the go – especially packaging, and the printers of the world are buying new printing machines to fill the stores in all the Hauptbahnhofs in all the world with beautiful colorful magazines.

And I hope the man from the train found the place where his parents met. I also hope he bought a magazine from the store in the station as he was leaving town.