The Bishop Peak Portrait Project comes to a close

Last year about this time I was preparing to install my remote camera on the roof of the Kennedy Library at Cal Poly.

I built a weatherproof box, designed and built a circuit board, tested the system, and then carried it up to the roof and installed it there to take a photo of Bishop Peak every five minutes for a year.

The project required me to build an entire infrastructure for taking, processing, printing, cutting and assembling photos. It was not without its problems. 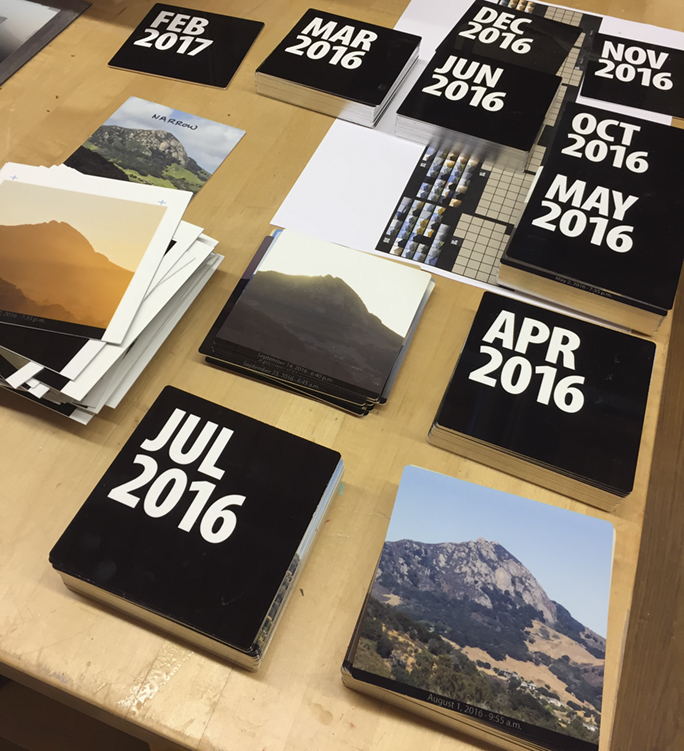 These are the stacks of aluminum prints, month-by-month on my workbench. The photos are printed by dye-sublimation onto 1/16 inch thick aluminum material. I machine them to a precise size to fit mortises on my display panels.

At the end of the first week I realized that the battery I installed in the box was not large enough. The solar panels were good at charging the battery, but after four days of gloomy weather, the system stopped. The ampere-hour rating of the battery and the ampere-hour consumption of my system could only survive four days without sunshine. We have not had four days without sunshine in many years, but last March we had five. So I added a second battery with a 10 AH rating to cover the occasional gloomy patch. We didn’t have any more gloom until December.

In November, the camera froze one night when the temperature dropped below 32 degrees. I built a heating element and thermostat to overcome that problem (I don’t think it was ever needed). 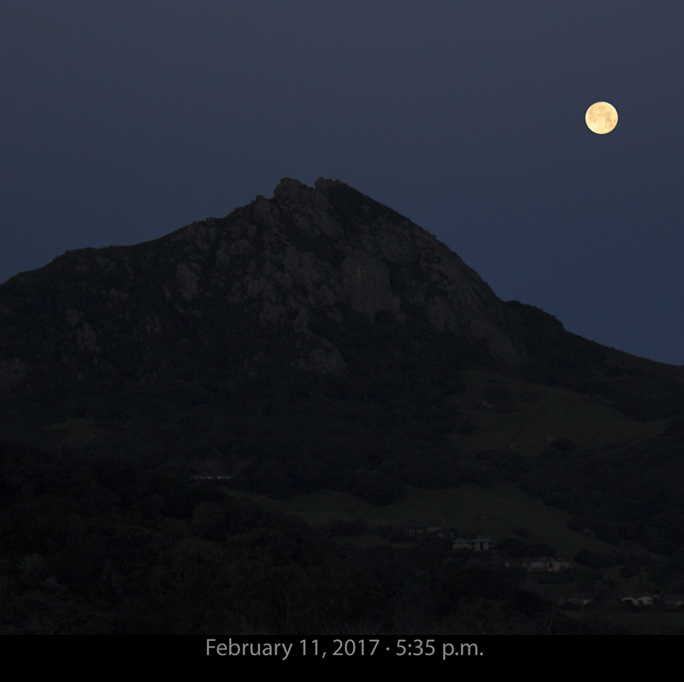 This is one of two photos this month to feature the Moon. In the year of shooting I have collected only a few images that have the Moon and the mountain in the same frame.

In late December and early January we got a lot of rain, and some of the rain found its way into a connector on the solar panel output, shorting-out the system for a day. The camera continued to take photos until the battery died. Luckily I was on the roof to service the camera on the day after it failed.

I have had no water incursion in the camera box, and through wet weather and dry, scorching heat and windy weather, the system kept going. The Raspberry Pi computer and custom made circuit board stood the test of time. It’s still up there running! (I have a complete back-up of the system which I switched in the fall just for good measure.) 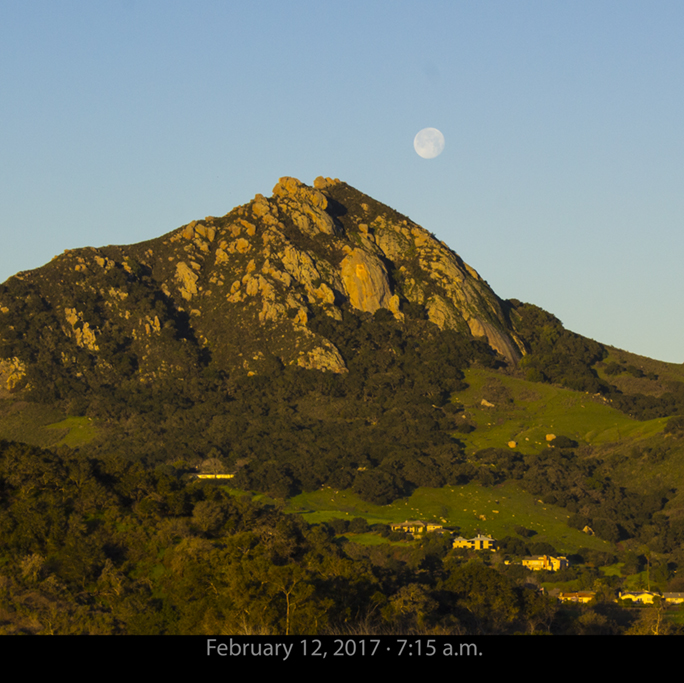 …and this is the other. Despite a considerable amount of rain, there have been some beautiful days in the first two weeks of the month.

The camera begins taking photos at 5:00 a.m. and stops at 9:00 p.m. The photos number (after I discard those taken in the dark) over 38,000 at this point. There are just over two weeks left in the project. When it’s finished I will go up and get the final photos, then get them printed, and then I will remove the camera system from the roof.

This is a mock-up of the final display with all photos in place to February 14, 2017. What I love about this project is the diversity of the light and the weather on “my mountain.” Notice August (upper-right): that was the month when we had huge wild fires raging in this and two adjacent counties. The sky was red for weeks with ash and smoke from those fires. This will be about 16 feet wide when installed at Cal Poly. Click on the image for a larger version.

The project will soon go on display in the Baker Center at Cal Poly; it will be a large-scale installation featuring 365 photos – one each day from March last year through February this year. The display will be about 16 feet wide and five feet tall. Each photo is printed on 1/16 inch aluminum plate, then machined to a precise size for insertion into my display panels.

I have been working on this so long and so intensely that it feels like a second job. I have spent many hours standing by my CNC router as it cuts the finished photos to size (one minute and 41 seconds per photo), and many more hours preparing the large aluminum panels for the display.

It has been fun and the photos are simply amazing. I’ll post again when the display goes up.

To read the final (?) story on the Bishop Peak Portrait Project, follow this link.