Printing on a 126-year-old press, and loving it!

I am engaged as a human printing engine this week (and next). The president of our university and his wife want a letterpress Christmas card this year, so have engaged the design and production forces at-hand to produce these cards. It’s a handsome design made by my friend Kara Suzuki, who is the University’s senior graphic designer.

The design is a complex illustration, made in Adobe Illustrator, and then converted to a magnesium printing plate by Owosso Graphic Arts in Owosso, Michigan. Printing from magnesium plates like this makes letterpress printing relatively easy because of the perfection of the printing surface. Little or no make-ready adjustments are needed, and the plates generally print perfectly without the small fixes needed for type and other mixed sources of relief images. 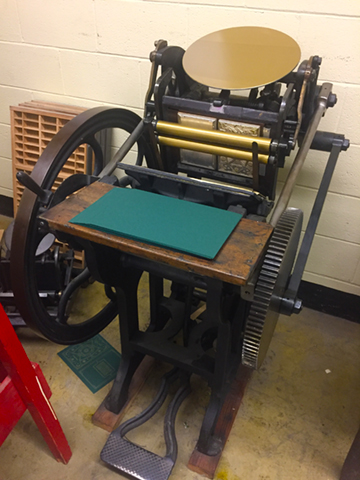 This is the 8 x 14 inch Peerless Jobber press we are using this week to print 5,000 impressions on green paper with gold ink. It’s a 19th century experience, and one that has been fun and productive.

The project began with an inquiry earlier in the fall. Did we have an interest in participating in this project? “We” in this case is me. I am the faculty advisor to the Shakespeare Press Museum, Cal Poly’s wonderful letterpress museum. In that museum we have 19 presses and over 500 fonts of letterpress type in both metal and wood. The presses are mostly in working order, with some that are used constantly and others that are more for looks.

When I was told that the press run would be 2,500 impressions, printed two sides, I realized that it would be impractical to print these cards on one of our four “snapper” lever presses (more correctly called Chandler & Price platen presses). These presses use the left arm of the operator as motive force, with a pull of the long lever to make each impression. It’s a nice way to print small quantities of sheets, but not the right way to print 5,000 impressions (plus extras). I decided to prepare one of our treadle presses to earn more productivity. 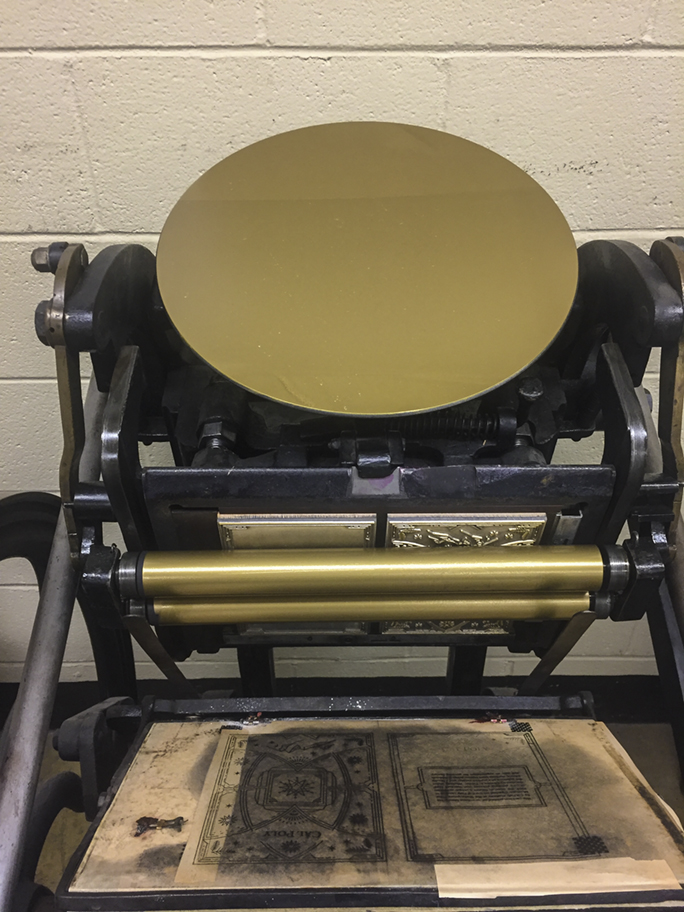 Here you can see the ink distribution plate, at top, and the rollers that transfer the ink from that plate to the printing type (silver plates behind the rollers). In the foreground is the tympan, paper that supports the gauge pins (visible on the left and at the bottom of that sheet). The gauge pins hold the paper in place while it is printed. Feeding is done by hand, and the press is powered by foot power.

We have five foot-powered presses in the museum inventory, each with an interesting story. Most are of the early 20th century, while two of them come from the last decade of the 19th century. I had restored another of these a year ago for a similar project, and it worked quite well. But we had one jewel in the collection that had not been used in many years, and it needed our attention for this project. Called the Peerless Jobber, the press is a small machine, about 800 lbs., that can print a maximum image area of 8 x 14 inches. It was perfect for this project which is 7 x 10 inches, trimmed.

I began by getting new ink rollers made for the press, a process done by our friend Julain Ramos in southern California. His firm, Ramco Rollers, specializes in making rubber rollers for a variety of machines – including letterpress machines. His work is spectacular, and he provided quick turn-around for this project. The beautiful new black rubber rollers arrived last week, and I installed them on the press. Then I began the process of adjusting and getting the press running perfectly while we ordered the magnesium plates from Owosso. 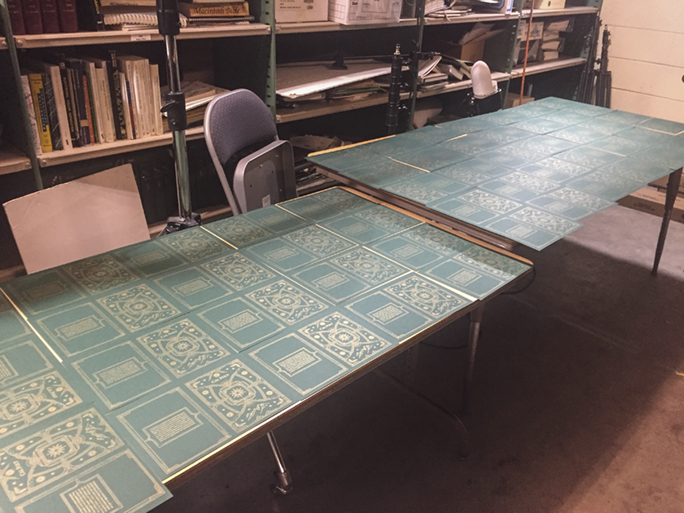 Here are some of the cards spread out on drying tables in our photo studio. As you can see, it takes a lot of tables to support 2,500 cards (there are only a few dozen in this photo). We ended up taking every horizontal surface on the first floor of our building to dry half the run.

The press was make by Peerless, a company based in Palmyra, New York, in 1890. It is a beautiful amalgamation of steel and cast iron parts, extraordinary machining quality, and the precision of a Swiss watch (on an industrial scale). Some rather sloppy repairs have been made to the press over the years, but most of it is today as it was built 126 years ago. I wonder if the Peerless workers said, as this one came off the line, “I’m sure that this press will still be in use in 2016!” That would be like making a machine today that will be working in 2132, an almost unimaginable time in the future. Will my iPhone 6 still work next Thursday? Will my Volkswagen “clean diesel” Toureg still work in 2018? The fact that this press still turns and prints like the day it was built is really impressive (if you’ll excuse the pun).

And, it doesn’t just print like it did in 1890, it hums with precision and efficiency. There is a wonderful mechanical music to this machine, the whirring of its gears, cams and followers all moving in a concert of near-perfection. And it is all powered by foot. You can pump the treadle with either foot. I prefer my right, while I stand on my left. In this stork-like pose, one powers the press by pumping the treadle, which with an eccentric arm on the main crankshaft, transfers the foot power into rotational power, which causes the platen to reciprocate, which causes the press to close cyclically, which creates printing. This is a rare experience.

It didn’t make this music at first, as it had sat idle for many years. I had to oil and cajole, and crank and push and turn the press until it was happy again. Those years of idleness were overcome with some love and a lot of lubricating oil. The platen depth adjustments on this press are made with two very large threaded bolts that have threads coming out both ends from a hex-head in the middle. These had become mired in ink and dust and were immovable when I began the restoration. I removed the entire platen from the press, removed those bolts, then cleaned them, rethreaded them (and their companion threaded receptacles) and put the machine back together. The result was very satisfying. I was able to adjust the printing gap to perfection with very small turns of a pair of very large wrenches. Now the press is set to industry standard printing depth, and it will not need adjustment again for some time. The most satisfying part of this is seeing the two shiny steel bolts sitting in their nest of flat black cast iron neighbors. They gleam in contrast to their surroundings.

Once I had the press adjusted and turning well, I mounted the two magnesium printing plates into the chase, the cast iron frame that holds the image part in place for mounting it in the press. The chase was then locked in place in the press, and ink applied to the distribution plate. I made one make-ready run on the press to test its correctness and fit, then cleaned it up and got ready for the production run. A clean tympan (a special oiled paper that holds the paper to be printed) and a small amount of adjustment of the gauge pins (positioning pins for the paper), and I was ready to go. On jobs of this length I apply a few drops of sealing wax to the gauge pins to prevent them from moving during the run. It’s an arcane process, and it’s fun.

I cut the paper slightly large so that I have something to grasp when feeding the sheets into the machine. The design comes to 1/4 inch of the edge, so having a bit of paper to grab makes it easier to print these cards.

I put metallic gold ink on the press and distributed it evenly, then made a few test impressions. It looked great, and I began, working with a team from Cal Poly’s Marketing and Communications group, to produce the big run.

I set up folding tables to support the finished printing, as the gold ink needs about a day to dry. We realized soon that we didn’t have enough folding tables, so we expanded our work area to include an unused classroom (Thanksgiving holidays made this possible). Soon we had every horizontal surface on the first floor of our building covered with the President’s Christmas cards. In two days we printed about 1,300 cards and only stopped when we ran out of drying space. We’ll start again next week and print another round of as many as we can dry in a day.

At my best pace I can print seven cards every minute. It takes me just over an hour to print 500 cards. The students who are helping are scurrying up and down the halls with racks of cards, spreading them around on the desks and cabinets in the rooms we have taken for this task. This press runs adequately fast to produce this job in a reasonable amount of time.

At this rate we will probably finish by Christmas! (The cards still have to be printed on the other side.)

If I practice, I might be able to raise my output to eight per minute, and that will shave ten minutes off the total production time needed to complete this job.

2 Responses to Printing on a 126-year-old press, and loving it!