Accidental art with my camera

Once in a while I take a photo under extreme circumstances, and it doesn’t come out as I hoped it would, or as nice as it looked when I took it.

Such is the case with several photos I’ve taken this year in very low light. To my eye, the scene is lovely, but to my camera, the scene in grossly underexposed. 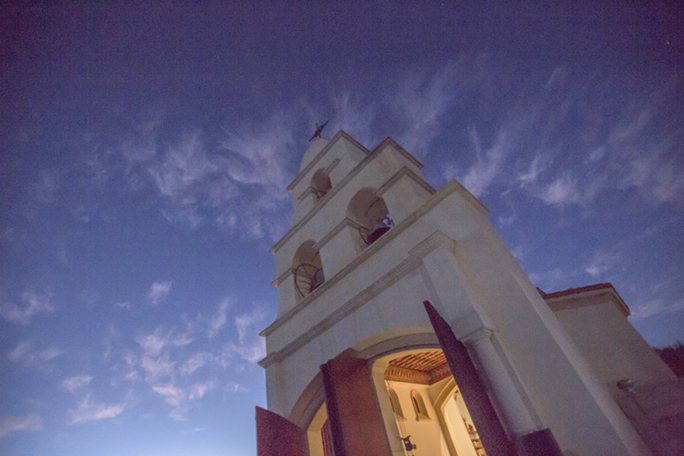 This was the scene at the end of a concert in July at the Serra Chapel near Shandon, California. It’s an OK photo – nothing special, and not the best of my evening’s work.

I took one of these accidental masterpieces last July at Serra Chapel in northern San Luis Obispo County after a performance of the Festival Mozaic orchestra. It was late evening, about 9:00 p.m. on a warm summer night. I was shooting with one of my Canon 5D Mark III cameras at an ISO of 3200, which, considering how extensive the ISO range is on this camera, should not have been even remarkable. On the computer later that evening, I enhanced the image in Adobe Camera Raw, boosting the exposure a stop or more. I went to the digital noise controls in Raw, and I slid the sliders to the right to reduce the visible noise in the image. 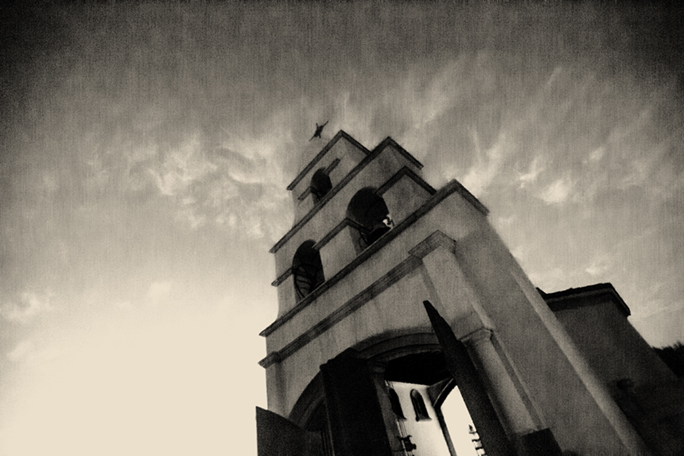 This is the finished image after I enhanced the digital sensor noise and applied a tint of cream color to the modified photo.

Instead of reducing the noise, I accidentally increased it, and what I saw inspired me. I decided to create an image that enhanced the noisiest image I could make from this master Raw file. I converted the image to grayscale, and then increased the contrast and added a duotone color of tan on top of the image. I liked the result a lot. I introduced a bit of vignetting in the corners, which made the photo slightly more mysterious. The result is much different from the original, and much more interesting. 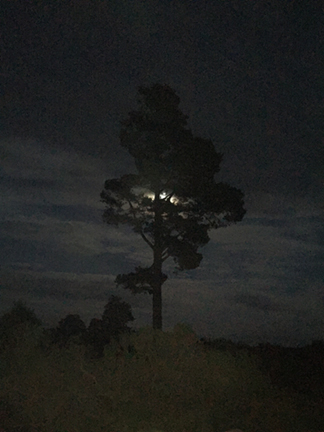 This is my iPhone photo of the moon backlighting a tall tree in the campground at Morro Bay State Park. So-so is the best I can rate it.

This last Friday evening, while camping at Morro Bay State Park, the moon rose over the estuary, and broke through a high cloud cover to back-light a tall tree in the campground. I took several photos with the Canon camera, resulting in nothing special. I raised the ISO to 16,000 and got an acceptable image, but it was too noisy to be useful, so I left it in my folder of so-so photos from the weekend. Then I took a snap of the same scene with my iPhone 6. Its 8 Mp sensor captured a reasonable image of the scene, and it too was about to be scored a so-so rating when I decided to enhance it in Camera Raw. 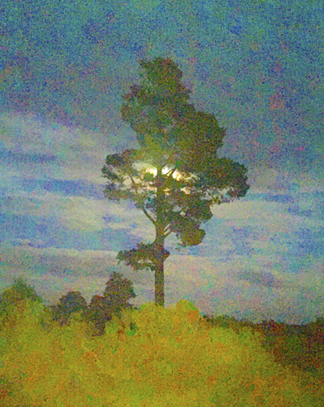 This is the same image enhanced in Adobe Camera Raw. I added two stops of exposure and made a few other minor changes to the image (mostly Vibrance and Saturation). The result is an almost painterly photo that is exceptional. And, totally accidental.

By raising the exposure by two full stops, I enhanced the image in much the way that early 20th century painters did with their palettes. My image suddenly looked like an Arts & Crafts work by Maxfield Parrish.

I lowered the contrast a bit, and opened up the shadows, and I adjusted the Vibrance and the Saturation to a degree that made the image look less three-dimensional and more like a poster. The result is extraordinary.

So, these two so-so images grew out of underexposed, wholly unprofessional originals, and turned into interesting accidental masterpieces, both benefitting from low light, image sensor noise, and serendipity. I am pleased that I took a few minutes to play with these images.

Now if I could only do this on purpose, I would do it all the time.

Brian Lawler is an Emeritus Professor of Graphic Communication at California Polytechnic State University, San Luis Obispo and currently Guest Professor at Hochschule München. He writes about graphic arts processes and technologies for various industry publications, and on his blog, The Blognosticator.
View all posts by Brian Lawler →
This entry was posted in Art, Photography, Photoshop techniques, Software and tagged Accidental masterpieces. Bookmark the permalink.

1 Response to Accidental art with my camera