After visiting Mt. Wilson’s two observatories in September, 2014, I began a reading marathon to learn as much as I could about the big telescopes that were used to usher-in the era of astrophysics. It was at the 100-inch Hooker telescope on Mount Wilson that Edwin Hubble discovered that 1, we’re not at the center of our galaxy, and 2, our galaxy is just one of many in the universe. Hubble discovered over 40 galaxies in his lifetime (1889-1953); today, scientists have identified millions more. 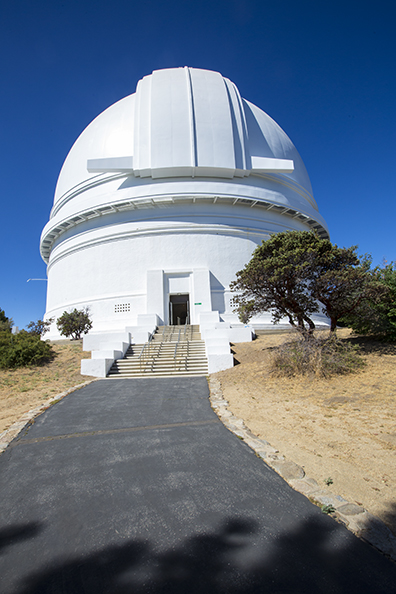 The main entrance to the Hale Telescope on Mount Palomar. A beautiful Art Deco structure, it was begun with funding in 1928, and first used by Edwin Hubble on January 26, 1949.

After I read a book about the Mount Wilson (above Pasadena, California) and Mount Hamilton (near San Jose, California) telescopes, I read a terrific book called The Perfect Machine about the making of the telescope on Mt. Palomar (San Diego County, California). I decided to put that telescope on my must-see list, and last weekend my wife and I visited the huge instrument.

The big California telescopes were each, in turn, the largest in the world. They followed another telescope, the Yerkes in Wisconsin, which was also the largest in the world in its day. All of these instruments were built with money raised by a single man – George Ellery Hale. He did this by getting philanthropists and large trusts to invest in his dream to make the huge telescope so that scientists could look further, and with more detail, into the night sky. Hale, who lived from 1868 to 1938, was himself a scientist and astronomer. He was one of the founders of the California Institute of Technology (Caltech) in Pasadena, California. By no coincidence, the Mount Wilson and Palomar Mountain telescopes are owned and operated by Caltech to this day. 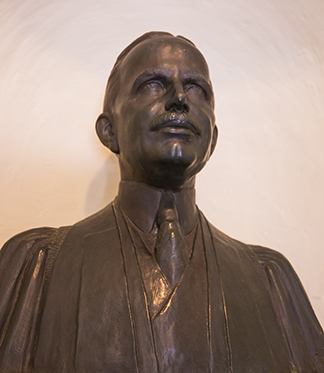 In the foyer of the building is a bronze statue of George Ellery Hale, the man responsible for the Yerkes, Mount Wilson 60-inch, Hooker 100-inch, and Palomar 200-inch telescopes. An astrophysicist, Hale was the man who made these instruments possible by raising the funds needed to build them. He was also co-founder of Caltech.

The story of the making of the mirror in the Palomar telescope takes up the lion’s share of the book The Perfect Machine. That feat was probably the most significant scientific/engineering achievement of the first half of the 20th century. Described by the author of that book, the precision of the grinding of the 200-inch mirror for the Palomar scope is so nearly-perfect that it would be similar to machining a glass surface as wide as the United States with less than three inches of flatness error in that entire expanse. But the mirror is not flat – it’s a parabolic shape that forms the primary reflector at the base of the famous instrument. 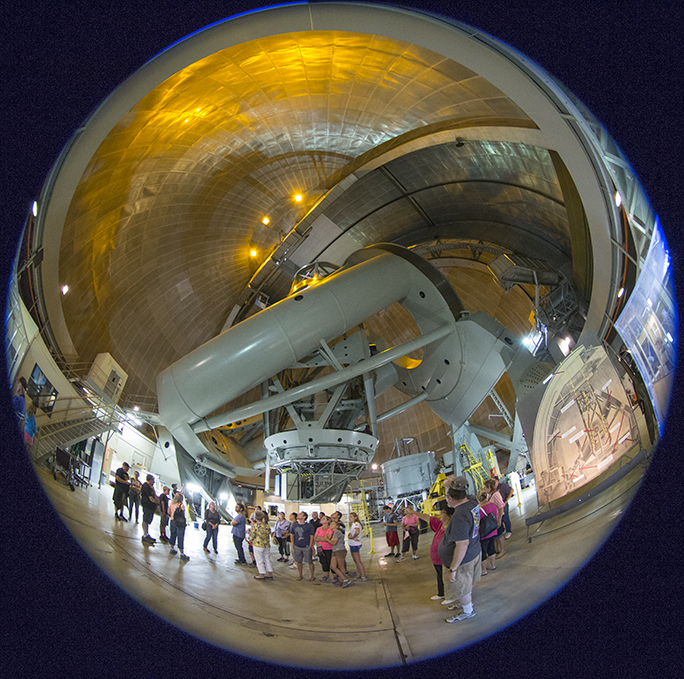 This fisheye photograph was taken while we were on the guided tour of the Palomar facility. The telescope stands vertically in the center, behind the huge horseshoe structure that supports it.

The telescope is called a Schmidt design, named for another Caltech scientist Maarten Schmidt, and is based on an earlier design by 17th century French scientist, Laurent Cassegrain. The 200-inch telescope uses the mirror to focus light from the night sky onto a series of lenses, or additional mirrors in various locations inside, or outside the telescope. If observed at the top of the telescope (which was originally the way it was operated), the telescope is the equivalent of an f3.3 lens with a focal length of 660 inches or 16,764 mm. The scientists who operate the telescope prefer instead to insert a hyperbolic mirror at the top and reflect the light back down the center of the telescope to the base, increasing the focal length to 3200 inches or 81,280mm. At that focal length the aperture equivalent drops to f16. There is one additional option that can be used that reflects the light a third time to the side, resulting in a focal length of 6,000 inches or 152,400mm at the equivalent of f30. This third option, we were told, is not used. 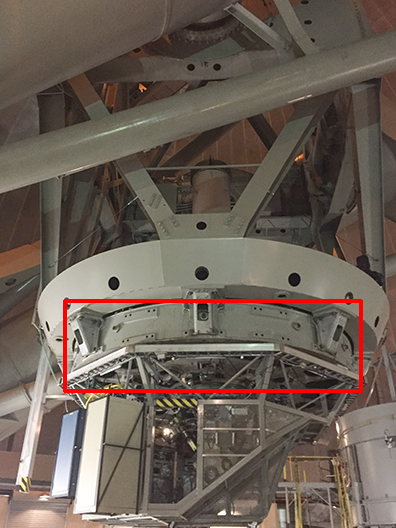 The 200-inch mirror is encased in the base of the telescope (identified here with a red rectangle). The mirror is removed from the telescope every two years to be cleaned and resurfaced. That is done in a vacuum chamber located in the same room.

Until recently, the 200-inch telescope used either glass photographic plates or film to make images of the night sky. As technology has allowed, the telescope has been converted to capture images with electronic sensors like those in digital cameras. Scientists, including Edwin Hubble, used to stand or sit up at the top of the telescope for hours at a time – sometimes several nights in a row – to capture a star cluster or a nebula. The nights were frightfully cold, and the job required attention to the detail of aiming the telescope continuously by following a guide star, or watching the subject through a spotting telescope while the film was exposed. One could not fall asleep during an exposure like this because it would ruin the image. 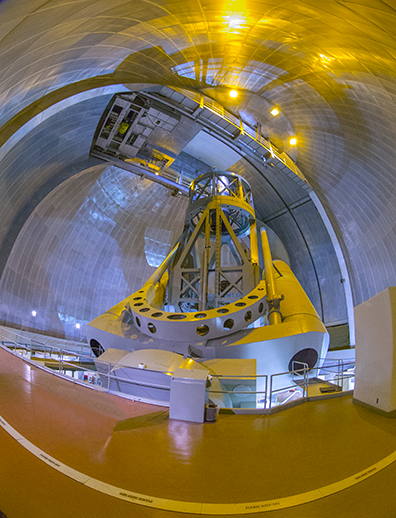 This is the north end of the telescope yoke (the U-shaped ring in the foreground) with the telescope instrument standing vertically in the middle, pointed at the peak of the dome above. The Hale Telescope is the only one of the four built by Hale that can point to Polaris, near the horizon, by dropping to the bottom of the horseshoe yoke.

Size really matters in telescopes. In the late 1920s, when George Ellery Hale envisioned Palomar, the 100-inch Hooker instrument on Mount Wilson was the world’s largest. The astronomers working there, including Hubble, and occasional visitors like Albert Einstein, were very pleased with the performance of the scope. But, they wanted to look farther into the universe, and they yearned for a larger telescope. Hale went back to the donor organizations that had funded the existing telescopes and asked for funding again, successfully raising US$6,000,000 for the Palomar project. They also needed to get away from the light pollution of Los Angeles, whose population and industry were growing at an astonishing pace. The Mount Palomar location was selected from a number of candidates due to its remoteness and freedom from the light of then-distant cities. Today it fights with light pollution from Riverside, San Diego, and the colossal Los Angeles “metro area.” (I hate those terms!)

Today, the Palomar telescope is the 19th largest reflector in the world, and the 13th largest single-piece reflector telescope on Earth. The largest, Gran Telescopio Canarias (in the Canary Islands), is 409 inches in diameter, but it is not a single mirror, it is an array of smaller mirrors that make-up the primary optic on that telescope. I had the privilege of seeing one of the segments of Hale 2 (Mauna Kea, Hawai’i) being machined on an ion milling machine in Rochester back in the 1990s. Those lens segments, measuring one meter (39.37 inches), each were cast, then water-jet cut, and finished at various Kodak labs, then assembled into an array 394 inches (10 meters) in diameter on the peak of Mauna Kea. Segmented mirrors are considered superior because 1, they can be made, and 2, they can be dynamically adjusted by computer controls to compensate for atmospheric aberrations, making the “seeing” of the telescope significantly better. 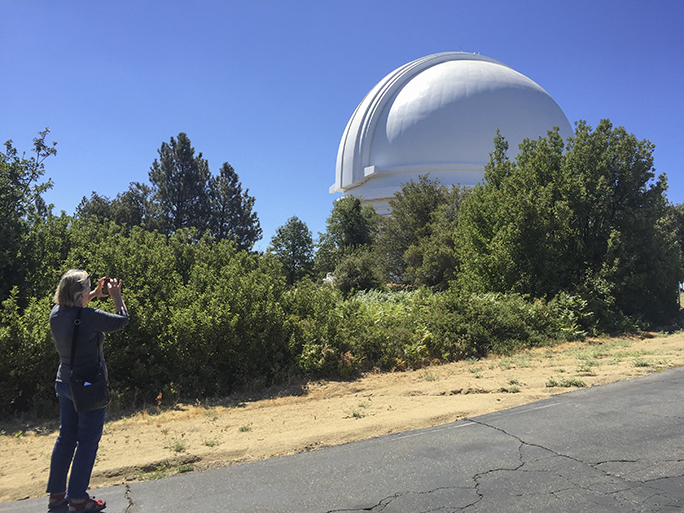 My wife photographs the dome of the Hale Telescope on Mount Palomar. It is both beautiful and functional; astronomers and scientists use the telescope about 300 nights each year.

Palomar has a similar dynamic-viewing device which is often placed in the sensor cage at the Cassegrain focus of the telescope (at the bottom). That device adjusts for aberrations using optics within a camera/optic system rather than modifying the shape of the mirror.

My must-see list is now one item shorter than it was, and I am now a proud visitor to the Hale Telescope, one of the great scientific instruments of the 20th century. Caltech opens the observatory to the public daily (weather permitting) and has two tours each weekend day where visitors can walk inside the dome and visit the instrument a bit closer than through the gallery windows. For the scientists who use the telescope – it is used about 300 nights each year – it’s an unparalleled experience because 1, they don’t have to go up to the top and freeze for hours at a time (the instrument is now operated from an air-conditioned control room) and 2, they now use electronic sensors (CCDs and CMOS sensors) to make their exposures. I was told that a typical exposure now is 15 minutes or less. That’s a lot fewer minutes than the 30-hour exposures that Edwin Hubble endured in his time on the scope.

The Hale observatory’s list of accomplishments reads like a Who’s Who of stars, nebulae and gas giants (among other astrological phenomena). I recommend 1, read the book, and 2, visit the observatory if you can.