My brief visit to Mars

I spent a couple of weeks on Mars earlier this year, on assignment to take some photos.

There was no oxygen, so I had to hold my breath for two weeks. I did not run into Matt Damon.

The work that I was doing culminated in the construction of a beautiful photo mural at Cal Poly in the College of Science and Mathematics. 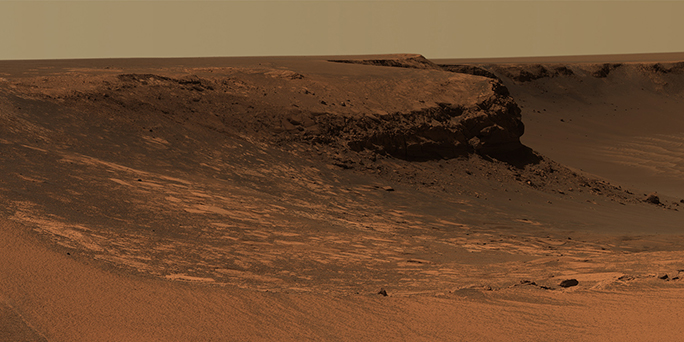 This is Cape Verde, seen from Duck Bay in Victoria Crater on the surface of Mars. The rover Opportunity made this, and thousands of other photos, while exploring the crater in 2006 and 2007. This is the image that I enlarged and prepared for printing on 14 sheets of aluminum for mounting on the wall at California Polytechnic State University. Images courtesy JPL and NASA.

OK. I was never on Mars. The images were actually taken by the Opportunity Rover, A Mars Exploration Rover, which landed on the surface on January 25, 2004. Opportunity is the sister vehicle to the Spirit, which eventually got stuck, and is waiting for the Auto Club to come rescue it (Spirit stopped transmitting signals in 2010). There is some dispute as to whether its current location consitutes “off-road” activity, so the Auto Club may not cover the cost of the rescue. 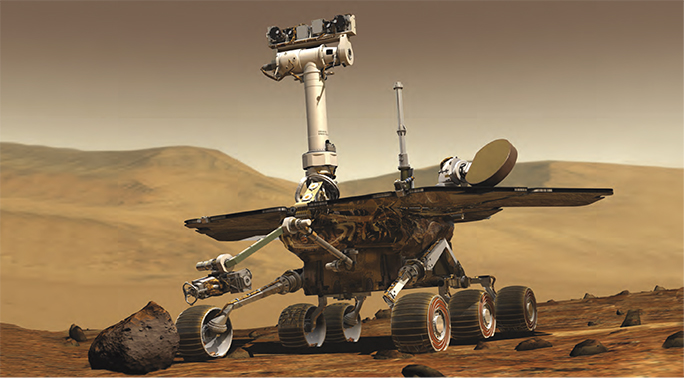 This is an artist’s illustration of a Mars Exploration Rover (MER). Both Spirit and Opportunity look very much like this. Illustration courtesy of NASA/JPL-Caltech/Cornell.

Opportunity was designed to last for 90 sol (the unit of Martian days). It has outlived that expected lifespan by a factor of 45, and is still driving around, gathering information and photos of the Martian surface, and making geological discoveries. It was Opportunity that very recently discovered that there is liquid water on the planet, and that discovery has caused a new round of applause for the little rover.

Opportunity spent about two Earth years exploring a site called Victoria Crater (it rolls at mere inches per minute when it moves). That exploration resulted in thousands of excellent images being sent back to Earth where they are received by the Jet Propulsion Laboratory in Pasadena, California. There are six cameras on Opportunity; they are called:

The panoramic camera has the ability to shoot panoramic and stereographic images, often simultaneously. This is a list of the filters on the two camera imagers of the Pancam:

The photos I was interested in processing were taken on September 28 and 29, 2006, in the Victoria Crater, looking at a promontory called Cape Verde from Duck Bay where the rover entered the crater.

For this project I took 63 of the PANCAM images from the left camera only, and put them together into a panorama that would eventually be printed 22 feet wide by almost 12 feet high. My image is made up of 21 sets of three images, red, green and blue (I wrote about Sergei Prokudin-Gorskii doing this in the early 20th century using the same technique).

The process was relatively simple. With the assistance of Stephen Benskin, a photo technician at the Jet Propulsion Laboratory, I was able to download the source images from the online database of Mars photos, and then assemble these into sets of three R-G-B images. Then, using Adobe Photoshop, I put the three imges into their appropriate channels to make them “full color” images. Mr. Benskin also provided a Photoshop Statistics file to use to “color-correct” these images to the degree that the JPL scientists like to think the Martian atmosphere would look to humans. This file was applied in the Match Color palette in Photoshop. 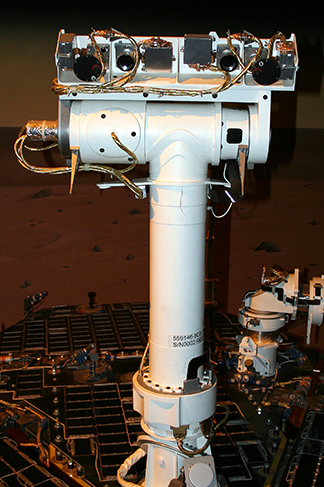 This image of the camera mast was taken when the MER mock-up was built at JPL in Pasadena. The two PANCAM lenses can be seen with black disk packages mounted. Inside these packages are the arrays of filters listed above. Photo courtesy of JPL/NASA

Once I had the 21 source images prepared as color images, I was ready to make a panoramic image by stitching them into a whole (the PANCAM shoots with an acceptable overlap so that standard stitching programs will stitch them together).

The first big problem I encountered was that the PANCAM’s resolution is only 1,000 x 1,000 pixels. It’s a 1-megapixel camera! And, the first column on the left, and the last column on the right are white pixels, making them slight hindrances to stitching. I fixed this problem by writing an AppleScript to direct Photoshop to crop the images to 998 pixels x 1000 pixels, eliminating those white columns of pixels.

The resolution problem was much bigger. In order to print this panoramic image as a billboard-size photo I would need gigabytes of data. Stitching the 21 images together at their native resolution would create a file of just a few megabytes. This was clearly not going to be good enough, and the project would be doomed to being a blurry image.

Genuine Fractals to the rescue!

In 1997 I was approached by a couple of gentlemen who had worked with the Jet Propulsion Laboratory to develop a photo enlargement program called Genuine Fractals. They wanted me to try the software and write about it in the original version of this blog (on the Graphic Arts Monthly site, now defunct). That program was developed by the Altamira Group in Burbank, California. Genuine Fractals uses fractal algorithms licensed from a company called Iterated Software to enlarge images far beyond the rudimentary up-scaling that can be done in Adobe Photoshop and other imaging applications. The process creates a fractal map of an image that is based on the detail in the image, then making that map into a file that is resolution-independent, so that the image can be made any size without losing that original detail.

Over the years, Genuine Fractals was sold to a group called the Lizard Group, then eventually was added to the offerings of OnOne Software, which makes a collection of stand-alone and plug-in products for image processing.

By an amazing coincidence I already own the OnOne products, so I have the current version of the fractal program, now called Perfect Resize.

I calculated the size of the image I would need to cover a 22-foot space on the wall, made a few test images from the Mars photos, and settled on a resolution of 193 ppi for the final images (not as much as I really needed, but it was the best I could get. This resulted in the full panorama being 3.86 gigabytes, which was – barely – adequate for the purpose.

I applied the Perfect Resize software to each of the 21 color images, bringing them all to the full size I would need. Then I put the resulting files into PTGUI Pro, my favorite stitching program, and made the image for the wall. It worked perfectly. The apparent sharpness and the detail of the contributing images were maintained, and the full panorama looks great.

Please read the rest of the story: How I separated a 22-foot panoramic photo into 14 precisely-rendered panels, then had them printed with absolutely no error.