A few weeks ago I decided to take the plunge and get a new computer. I have been using an aluminum Mac Pro tower for many years (I have had two of them). The current machine has eight cores, and all four disk slots are filled with enterprise speed 2TB hard drives. I have been using 14 GB of RAM, and getting along pretty well.

The new machine is one of the snazzy black cylinders that Apple is selling. It has a 3.5 GHz 6-Core Intel Xeon E5 processor, 32 GB of RAM, and I ordered it with 256 GB of SSD memory. I thought this would be fine, but have since come to the realization that I need a lot more than that. 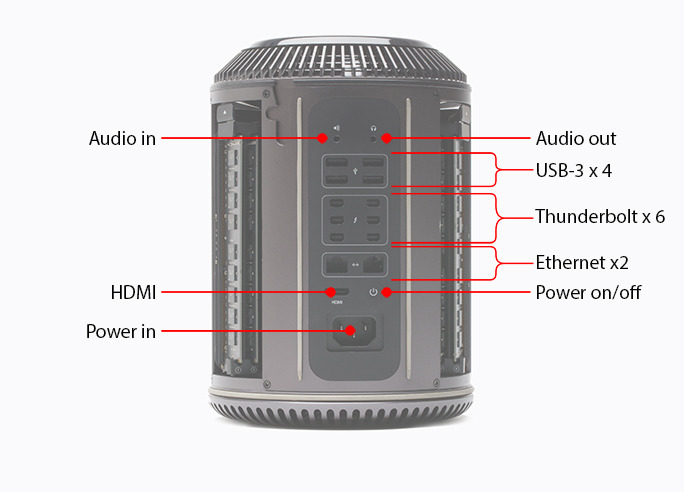 This is the plug side of the Mac Pro cylinder. It has room for four USB cables, six Thunderbolt cables, one HDMI outlet, an audio in and an audio out, and two Ethernet plugs. I have filled most of them already.

For hard disk storage I chose a ThunderBay drive from Other World Computing with four 4 TB drives inside. This would give me 16 TB of storage, but I set it up as a RAID5 array, leaving 12 TB for storage. This is only 4 TB more than I have been using, but I think it will last a while. When I fill it up, I will add another one and have 12 more terabytes of storage. The advantage of the RAID5 system is that the drive is (mostly) safe from hardware failures. If one drive fails, I can replace it and not lose any data. If two drives fail, I am sunk. 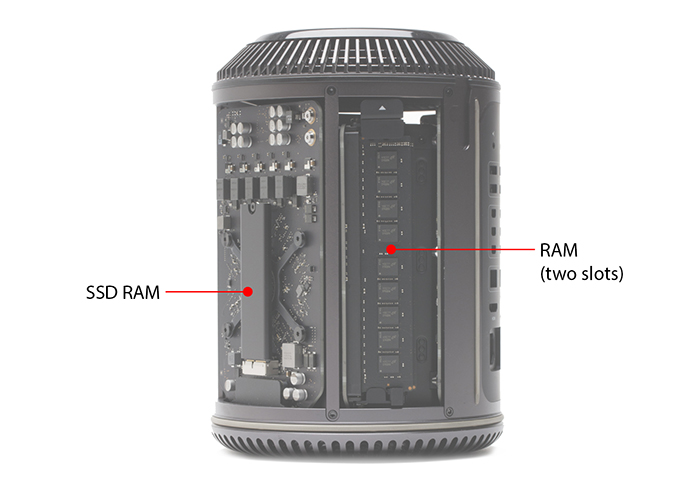 This is the interior of the cylinder. At the top is a cooling fan, and on the internal faces of the machine are the electronics. I upgraded mine to 32GB of RAM, and will soon upgrade the SSD drive to 1TB with a third-party upgrade made by Other World Computing (I ordered mine with only 256 GB of SSD, which has proved not to be enough space for my work). The other pair of RAM slots is on the opposite side of the machine; RAM can be changed by the consumer.

At the moment I have no back-up. I have a separate FireWire 800 Time Machine back-up disk array that filled up last month. When that happened, I shut it off. Once I get everything on the new machine settled, I will restart that drive and get back to incremental back-ups for safety.

In addition to these storage devices on the desktop, I have a 16 TB NAS server on the floor. I built this myself two years ago, and it has been a great companion to my day-to-day work. I use it as an archive storage drive. That drive operates over Ethernet, so it’s not as fast as the ThunderBay, which is a Thunderbolt 2 drive system, capable of reading and writing at preposterous speeds.

So now I have lots of storage, lots of RAM, not enough SSD storage, and a wickedly fast new Mac Pro.

It took me five days to transfer my four hard drives to the ThunderBay. I don’t know where they came from, but I have an average of three million files on each of these drives. I don’t think I created 12 million files, but somehow they are there, and I needed to copy them all from one to the next. My computer was tied up for days, and days. Occasionally I got some work done between disk copying sorties.

Once I finished configuring the 12 TB ThunderBay, I migrated my applications to the SSD drive in the new Mac Pro. And it was then that I realized just how short-sighted I had been when I ordered this machine. I have almost 500 GB of applications and support files, and on the new machine I have only 256 GB of storage space available. Once I realized this, I called Apple to see if they would let me send the machine back for an upgrade. I had waited one day too many before making the call. If I had called one day earlier, they would have allowed me to return the machine. Now I’m stuck with “only” 256 GB of storage in SSD PCI-e memory.

This last week, Other World Computing announced two new SSD upgrades for my new Mac Pro. I ordered the 1TB version, which will be shipping in January. Though a little more expensive than it would have been if I had bought the machine with 1TB in it, the new SSD will make my storage larger, and the company sends a small USB drive in which to put the old card when I do the upgrade. That USB drive will become a 256GB SSD portable drive when I’m finished. That might be a nice item to carry around.

The nice thing about the Mac Pro is that it’s compatible with my existing computer displays. I use two 24-inch Cinema Displays with Display Port adapters on the ends. These, conveniently, plug right in to the Thunderbolt receptacles on the back of the new computer and they work fine.

I can also use FireWire 800 with a small adapter, making it possible for me to use my Nikon CoolScan, my Epson desktop printer, and a variety of other FireWire devices I have scattered around my office.

My USB cables plugged in and worked also, so technically I suffered no technology obsolescence by purchasing the new computer. Everything I own still works on the new machine. I remember the time I upgraded to the aluminum Mac Pro and learned that my SCSI externals would never work again. This has been a more pleasant experience. 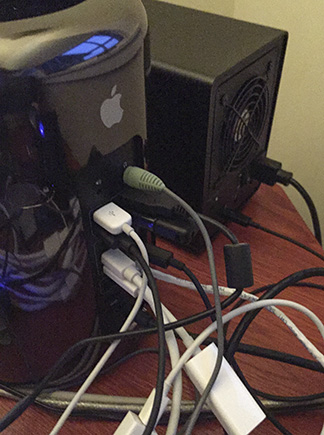 This is my Mac Pro with wires emerging from the back. Behind it is the OWC Thunderbolt RAID5 device with four 4TB drives within. Formatted, that allows 12TB of external storage.

Somehow my desk isn’t as beautiful as the Apple ads. Coming out of the back of the onyx obelisk are a scatter of cables, all heading off to a nearby location to connect to storage, displays, card readers, etc. I also have my external speakers plugged in and working with the new machine. It’s a rat’s nest of cables. But why complain? It’s a very cool computer, and it heralds a new chapter in my long relationship with the Macintosh.

In the months ahead I will certainly appreciate the speed of the new machine. I’m especially interested to see how quickly this new cylinder will stitch 1,500-image GigaPan images. I’ll be making a couple of those in Death Valley in the next few weeks. With processing times of up to 12 hours on the old eight-core Mac Pro, I had to be very patient. The new machine should do that a lot faster. I’ll let you know how much faster.

The machine is, like most Mac Pro models, stunningly beautiful. It’s utterly silent. It was built in the U.S.A., and it’s made for very intensive computing. I do that once in a while.