My wife and I went to Burning Man last week. It was something we had wanted to do for several years, and now we have done it.

The legendary counterculture festival is held on a dry lake bed in northern Nevada, and for a week each summer that lake bed turns into a city of over 65,000 people. We were just two of them, but we were immediately swept up in the activity and community of Black Rock City. We had many preconceptions of the event, as my sister has been going for many years, and our son for the past four years. They had told us about the event, and had encouraged us to go this year. Their stories made us want to attend and experience it for ourselves. We were not disappointed by the reality of Burning Man.

This sculpture, standing about 50 feet tall, was called The Embrace. It was built by a team of 80 from three cities, assembled on the site, then burned to the ground on Friday morning. The Embrace was funded with crowdsourcing money on Kickstarter. Below is The Embrace an hour later. 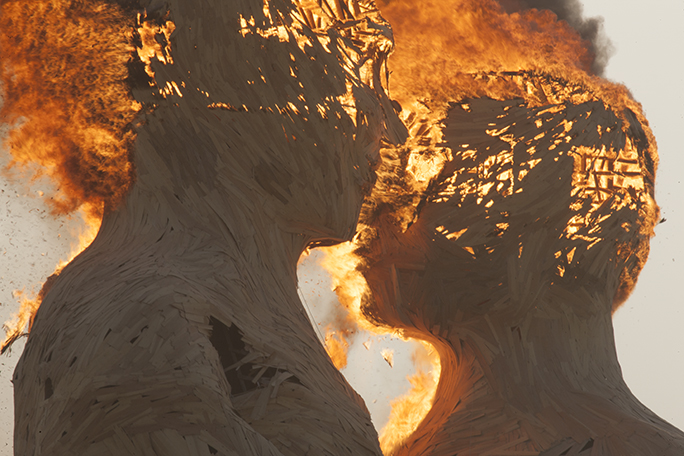 Getting tickets was not easy. The 65,000 tickets sold this year were swept up in less than an hour. Two additional rounds of ticket sales in early and mid summer sold out in seconds. We were lucky to be able to buy tickets and a vehicle pass from two people who could not attend this year’s event. And, those ticket holders were nice enough to follow the no-scalping policy of the event organizers, selling them to us at face value. Burning Man tickets are not cheap: $380 each, plus the parking pass. There was a fellow sitting by his car at the Wadsworth exit of Highway 80 in Nevada with a sign that read “Burning Man Ticket Wanted: will pay $1,000!”

The 65,000 inhabitants of the event live in a semicircle that is several miles across. Outside the area reserved for camping is the Playa, a large open space that continues for several miles onto the lake bed. On the Playa are the Man, a gigantic wooden sculpture of a man towering over 100 feet into the air, the Temple, another structure built by the Burning Man organization, and numerous other constructions. That Man and several of the others are burned to the ground by the end of the week. It’s odd and delightful. 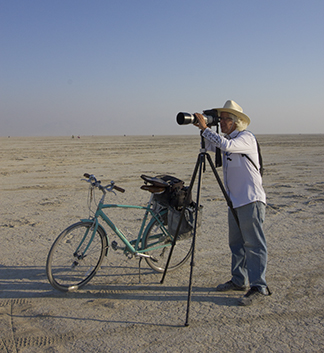 That’s me! Out on the Playa with my Bianchi bicycle, two panier bags filled with camera gear, and wearing my inauthentic cowboy garb. I was, mostly, avoiding the sun with long sleeves and long pants.

One should take a lot of photos at Burning Man, and in the process learn how to keep your camera equipment safe in the harsh environment that is Black Rock City. The alkaline dust (Ph 10 we were told) is pervasive. It gets in your ears and eyes; it gets into the spaces between your toes. Sometimes the wind blows the dust into white-out clouds that prevent you from seeing the length of your arm (we experienced this).

Burning Man is difficult to describe with words because there are too many possible adjectives for this festival. Dusty comes to mind as the most effective overall.

The good news about the dust is that it comes off easily with a damp cloth. I washed my face several times a day with a damp washcloth, and that was very effective. Water-tight bags can protect cameras while in transit. Even the lenses cleaned up easily with a lens cleaning cloth. Fortunately the dust is not abrasive; it’s like talcum powder (or for this audience, it’s like toner – with particles about 5 microns in diameter).

My cameras looked like they would never be the same, but I cleaned them twice and returned them to like-home condition. Everything works fine and the cameras were not damaged by Burning Man. While on the Playa I kept the cameras in their cases, and that sufficed to keep them serviceable.

Beyond the dust is the event itself. Words, again, fail to describe it adequately. There is no commerce, and nothing except coffee drinks and ice can be purchased with money. There is no barter, only gifts. Everything is free, willingly given by people to other people in the spirit of the event. It’s quite amazing.

Nothing is expected of you when you are there except kindness, an open mind, and adherence to the law and some basic rules of behavior on the Playa. As a result of this code, there was no litter anywhere. None. In a city of 65,000 people, everyone is deputized to pick up litter, and everyone does (they call it MOOP on the Playa, for Matter Out Of Place). The few times I saw something out of place, I stopped my bike and picked it up, later to deposit it in my own trash container. Everyone else does the same.

People behave well. Good citizenship is a way of life on the Playa, with folks stopping to help others, hugs freely given to one and all, and an overarching sense of comradeship that I have seldom experienced in my lifetime. As we drove to our campsite on the first day we were greeted by those already settled, universally, with shouts of “Welcome home!”

There was little to no cell service, which I enjoyed because we had a three hour conversation, uninterrupted, with my son Patrick. During my days on the Playa, my phone beeped twice with text messages from friends. When I attempted to respond, the phone indicated failure. I was relieved, and continued to ignore my phone, except as a timepiece and camera, for the duration of my stay.

During the days we spent at Burning Man we made new friends with the campers next to us – a group of Russians on one side, some young men from Los Angeles on another, two young women from San Francisco on the back, and a couple from Park City in an RV next to ours. Having an RV means not having to walk a block or more to the port-a-potties that are located around the city. The RV also provides good shelter from dust storms.

We attended a Blue Grass jam session, an outdoor movie, a French toast event (with about 500 people in line for the breakfast treat), a geology lecture, a symphony by the Playa Pops Orchestra, a demonstration of solar cooking, and I tried to find a group of people who have built bicycles out of PVC, but I never found them.

This is the art car I liked best. It was once a seaworthy vessel; now it is a rolling party platform that cruises the Playa with a continuous party on deck.

All transportation at Burning Man is human-powered, with the exception of those vehicles deemed worthy of being designated as Mutant Vehicles (Art Cars) which drive around the city and the Playa, picking people up, dropping people off, and providing mobile party platforms for the revelries of the festival. Some of these Art Cars are small, while others are gigantic. My favorite is a 60-foot yacht converted to a land vehicle that was driven around at about 3 mph while a continuous party was held on deck. 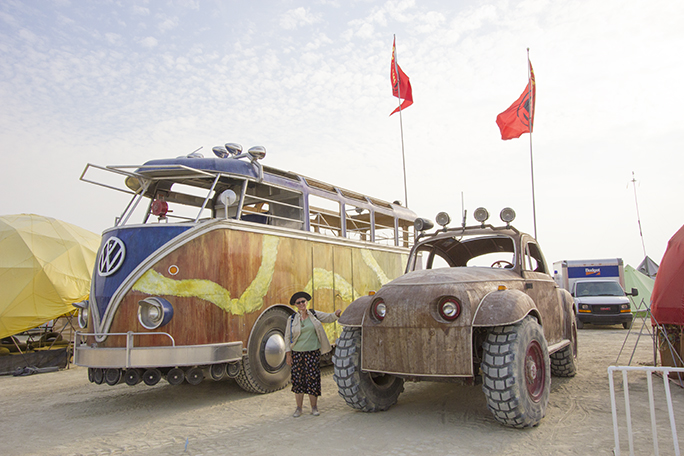 My wife’s favorite art cars were two oversize Volkswagens that perform transportation and party service. These are a semi-authentic ’60s era VW bus, and an original style Beetle. Both are enlarged, the bus standing about 12 feet tall. They are impressive works of art and engineering.

Everyone rides bicycles at Burning Man, as it is the only practical way to get around the large expanses of the Playa. Getting to the Man, for example, was more than a mile-long ride from our campsite. Seeing some of the art installations on the “deep” Playa was more than two miles’ distance from our camp. Bicycling was a necessity. On Saturday morning while exploring the Playa, we encountered what looked like a sculpture of bicycles, but which was called the Bike Portal. There, one could put a bike into a servicing rack, change a tire, adjust the derailleur, all with parts provided for free in the Portal. There was even a telephone to call for bike repair advice. It was delightful!

Tens of thousands of bicyclists at night might create a hazard, but people go to great lengths to decorate their cycles with LED lights and EL wire, both of which were sold in abundance by Amazon in the weeks before the event. With almost every bike lighted for safety, collisions were avoided, and everyone could see each other riding in the desert darkness.

On the Playa is a structure called the Library. We rode over to see it after hearing a conversation by some strangers about how they had to get out to the Biblioteque. The structure looks like a mosque or temple, and inside it features laser-cut plywood shelves and seats, none of which are cut or joined at 90-degree angles. On the shelves are hundreds, perhaps a thousand hand-made books, each made with hand-made paper, and bound by hand. These books began their lives as blank paper, but participants sit and write in the books, making them real, and filling them with prose. The Library is silent (as a library should be!) and was being used by a score of visitors when we went in. I was moved by the Library and its wonderful content. 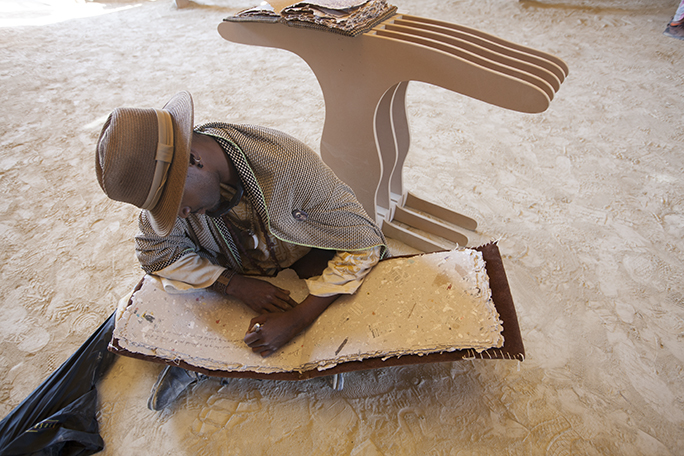 A man inscribes one of the handmade books in the Library. Behind him stands one of the organically shaped “chairs” that are featured in that structure.

On the typography front, we enjoyed the huge steel letters that say LOVE repeatedly across the Playa. At night, these large letters belch fire into the sky, controlled by a wireless keyboard nearby. People climb on, and in, the letters, and it’s one of the most clever art installations on the lake bed.

This is my wife inside the O of the large word LOVE on the Playa. At night, fire comes out the tops of these letters. The letters are built from plasma-cut steel, welded into three-dimensional sculptures.

Two, maybe three optical observatories are located on the Playa, the buildings made from cleverly-cut plywood, and assembled entirely without fasteners. At night people gather to look skyward with the assistance of a resident astronomer.

It was an eventful week, one unlike any other in my lifetime. Looking back, I wish I had gotten involved in more activities during the week, and spending less time in camp.

Friends have asked me if I will return to Burning Man. That depends of whether I am lucky enough to get tickets.

For those interested, I posted a photo gallery of images from Burning Man 2014. These are the best of my photos from the event: