Things are getting better

Five months ago yesterday I was hit by a pick-up truck while riding my bicycle to the university. On the back of the bike, in my panier bags, were my Canon camera, three lenses, a Really Right Stuff carbon-fiber tripod, two Canon strobe flashes and a set of Pocket Wizard radio strobe triggers. It was planned to be a photographic day.

I was wearing a helmet (I always do!), gloves, a jacket, and my business casual clothes. My trajectory took me into the air, and onto the pavement about five yards from the point of impact. 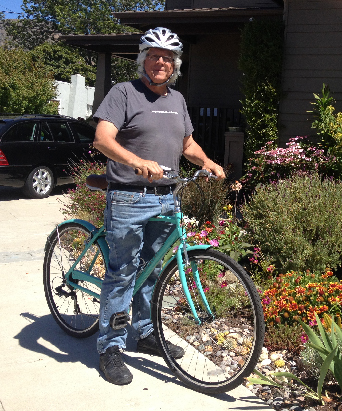 Here I am on my new Bianchi Milano bicycle. It has all the best features of a commuter bike, and I look forward to riding it to work.

While face-down on the pavement, I met some nice fire fighters, a pleasant paramedic, a very professional police officer and a host of others, including my colleague Teresa from the Journalism Department across the hall, who stopped to render assistance. She was my guardian angel that morning. She called my wife to tell her what had happened, and she coordinated the disposition of my photo gear.

Later that morning in the emergency room I was diagnosed with two fractures of my pelvis, and a number of contusions on my hands and legs. I was admitted to the hospital, where I spent three days working up to moving to a step-down location where I could recover in an environment where there were no stairs. I couldn’t go home because we have steps up to our door, and sixteen more to get to our bedroom. It would be a couple of weeks before I made it back to my own bed again.

I went to physical therapy for fourteen weeks, I had multiple MRI scans of my head, neck and arteries, I had surgery on my hip to correct the damage done by the truck’s hood ornament. I am now recovering from that surgery, a process that involves returning to the physician’s office every-other day. This has not been fun.

I walk almost normally now; I can get from my house to downtown, to the movies, and to the tasty taqueria just three blocks down the hill from our home.

And today I bought a new bicycle.

Then I did it. I also bought a new helmet (my old one was badly damaged in the collision), one with an adjustable headband.

The bike is my new commuter vehicle, and I intend to return to riding to and from work. I’m off for the summer now, so I can practice riding, and get used to the idea of crossing that intersection again. And, I will practice riding across that horrible intersection a few times before school starts in the fall. I’m fearful, but excited. I put a rack and panier bags onto the bike when I got home, and I put a bell on the handlebars (bikes need a bell!). I rode in circles on my little street, and it felt good to be back on a bicycle.

The challenge is entirely mental at this point, that plus some atrophy of my upper thigh muscles from not riding for five months. I have work to do.

Meanwhile, I have a beautiful new Bianchi Milano bicycle and a lot of time to ride. If you see me go by, please wave!

Brian Lawler is an Emeritus Professor of Graphic Communication at California Polytechnic State University, San Luis Obispo and was a Guest Professor at Hochschule München from September, 2021 to September, 2022. He writes about graphic arts processes and technologies for various industry publications, and on his blog, The Blognosticator.
View all posts by Brian Lawler →
This entry was posted in Adventures and tagged Bianchi Milano, bicycle accident, bike. Bookmark the permalink.

3 Responses to Things are getting better