When I was 17 years old I bought my first professional 35mm camera. It was a Nikon F. My high school friend Bill’s dad was a pilot for Braniff Airlines. His schedule took him from San Francisco to Tokyo every other Friday, returning two days later.

Bill’s dad offered to buy camera equipment for me in Tokyo when he made his trips, and I was more than happy to accept his kindness. I had a small printing company in the basement of my family home, so I had a little spending money as a result. One Friday I gave Bill’s dad $300, and the following Monday I had a brand new Nikon F camera body. 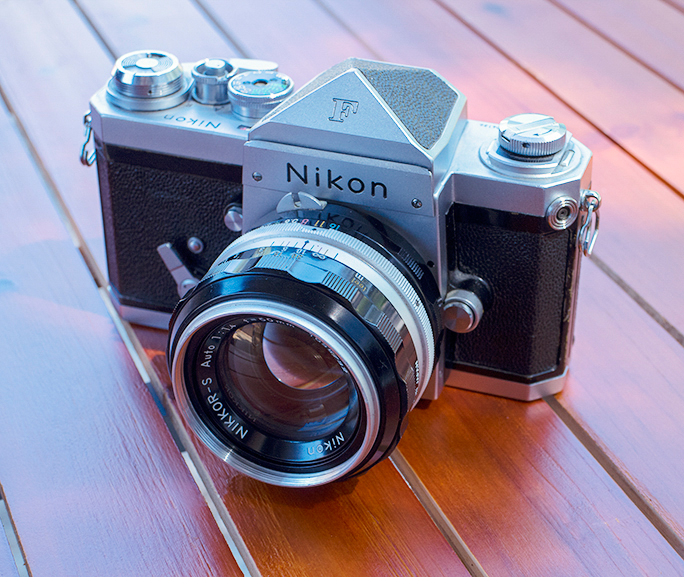 Nikon F serial number 6804136 has been in my possession since 1967. This is not the original lens, but one of the same focal length and aperture that I bought in that era. What a beautiful instrument this is!

A month later I sent him with more money to buy a couple of lenses. It was the deal of a century.

Bill’s dad wasn’t doing anything illegal or unethical. The customs threshold at the time was $600, so anything he purchased in Tokyo under that amount didn’t require duty to be paid to U.S. Customs.

I ended up with a couple of Nikon F bodies and a nice selection of lenses, all the envy of a pro photographer, but at a fraction of the prices charged in the U.S. I suspect that it had to do with rates-of-exchange and the relationship that Nikon had with Ehrenreich Photo Optical company, the U.S. importer of Nikon equipment at the time.

I bought these cameras and lenses to take photos for the high school yearbook, the a newspaper we published at my school, and for outdoor photography I did when hiking and camping. I already owned a Graphic View II 4×5 view camera, and a not-terribly-good Wollensak lens for that camera. I wanted to be the next Ansel Adams, something that I have never come close to accomplishing.

In my spare time I read the Nikon manuals, studied lens designs, and worked in my darkroom, a structure built into the corner of the laundry room in our basement (my parents must have been very patient people). I also read, and learned how to expose and process black and white film using the Minor White method of the Zone System pioneered by Adams (Minor White made it intelligible).

I was a pretty serious teenage photographer, and I made some nice photos. I think I tended toward editorial photography more than beautiful zone-exposed landscapes, but I took it seriously, and I did pretty well.

Over the years I bought additional cameras, changed from 35mm to medium-format, and continued to shoot. I bought, and I sold, and I traded. When the digital revolution arrived, I was there, getting in early with the Nikon D1, and later the D1x. I really liked digital photography, and was working as a consultant for various tech companies at the time, so it was important to stay on top of this new technology.

But I kept 6804136, my original Nikon F body and an original 50mm f1.4 lens. I had too much emotional attachment to let it fall into anyone else’s hands.

When I started teaching digital photography several years ago, I took it down off the shelf where I have it on display. I take it to class at the beginning of each new quarter, and I open it up and pass it around for the students to hold and to see how a fully mechanical shutter works. There are no batteries in a Nikon F camera.

It’s a wonderful camera, and I am as comfortable with it today as I was in the 1960s when I was first using it.

This is the new Blognosticator Mobile Laboratory, a Mercedes diesel van with an RV interior. From this vehicle I will be reporting about campsites in and around my part of the country.

Yesterday, my wife and I took our new Blognosticator Mobile Laboratory out for its maiden campout. It’s a Mercedes diesel van with a camper interior. We bought it in December, picked it up in February, and have been outfitting it with forks, knives and spoons, towels, pancake mix and s’mores makings (though we forgot the coat hangers on this journey). We chose a campground just 30 minutes from home so that if anything went terribly wrong, we could just drive to the store – or drive home.

After setting up camp on Saturday, I sat down to clean and polish the Nikon F. I loaded a fresh roll of Tri-X 400 film into it, and I took a half-roll of film. It’s mostly images of the RV, and a few of children playing in the playground. I’ll get it processed commercially this week. 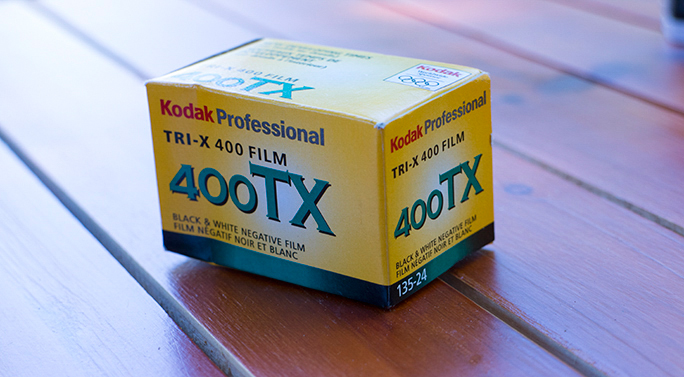 Yes, they still make it! Kodak’s venerable Tri-X black and white film for 35mm cameras was my favorite film in the 1960s. It was cheap in bulk rolls, and I processed it myself. Much of the time I pushed it to 1200 ASA (now ISO), so it was grainy. But the film performs well to this day.

I didn’t take my Weston Master V light meter with me on this journey, instead choosing to calculate exposure in my head. With the Tri-X film in bright sunlight, the correct exposure should be 1/400 sec. at f16. I shot a few frames at that setting, and shot a few at 1/1000 at f8, which is a tiny bit under-exposed. Modern digital cameras have 1/3-stop exposure intervals, but the trusty Nikon F has whole-stop increments. I did shoot a few at half-stop aperture settings. We’ll see when the film comes back.

Today I took a roll of Ektachrome 100 film, loaded that into the Nikon, and shot 24 frames in the campground, and down by the lake. I’ll send that out for processing also, and will see the accuracy of my calculated exposures.

The official exposure formula is more complicated, based on the sensitometric curve, and a series of points measured on that curve where film accepts its initial exposure (inertial resistance to exposure) above “base plus fog” and all the way up to overexposure. But, the rule of thumb for guessing exposure is surprisingly accurate.

I’ll publish a few of my Tri-X frames, and a few of my Ektachrome 100 frames when I get the film back next week.