As a kid I read The Boy Mechanic cover to cover many times, so many, in fact, that it’s almost worn out, as you can see in the photo, below: 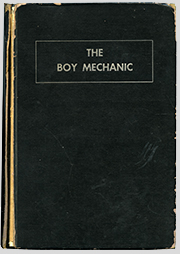 This is my tattered copy of The Boy Mechanic, published by Popular Mechanics in 1952. I pored over every page for many years in my childhood. I still love to read it from time to time because it brings back memories of garage-built projects.

One of the most intriguing projects reported in the pages of that book was about a bike with nine gears. All of my friends rode one-speed bikes in the 1950s, and the idea of multiple gears was really exciting. My sister’s bike had three speeds, changed with a Sturmey-Archer internal planetary gear box in the rear hub (that was the cat’s meow!).

…and this is the article that I read many times about a three-speed derailleur that had been added to a 3-speed planetary gear bicycle. Wow! Nine speeds! You couldn’t go any faster than that!

Over the years I got nicer and nicer bicycles including the finest one I ever had (1970) which was a Raleigh Professional, with Reynolds tubing, all Campagnolo Nuovo Record equipment on it, and skinny racing tires that went flat too often, so I changed from sew-up tires to tube tires, lowering the status of my “racing bike” to the level of “road bike.” I rode that one for about two decades, and I still love it. It is now in the possession of my favorite son, Patrick, who took it apart, then rebuilt it as a fixed-gear bike, then took it apart again, which is where it sits today. Oh well.

My current bicycle is a wonderful commuter bike that was given to me by friends for my birthday in 2006. It’s a Specialized Globe, an all-aluminum bike with lightweight fenders, a chain guard, a built-in generator, headlight and taillight, and a nice cargo rack on the back with two panier bags. I ride this bicycle every day, and I love it. Since getting it, I have saved about $5,000 in Cal Poly parking permits, thousands of dollars in gas I never bought, and I have earned the right to call myself a bicycle commuter. I have riden about 8,000 miles give or take a few, and the bike continues to serve me well. 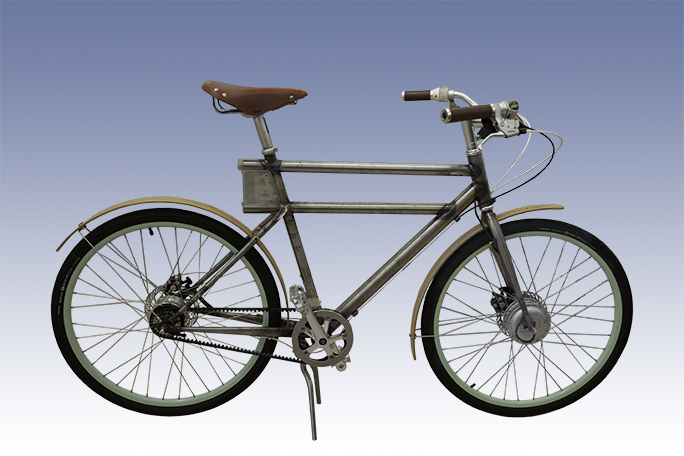 This is the prototype Faraday Porteur bicycle I rode last Wednesday. This one features a 350 watt electric motor on the front hub, dual disc brakes, lightweight bamboo fenders, and an eight-speed Shimano gearbox in the rear hub. Notice that it has not been painted yet (This was also the most difficult Photoshop drop-out mask I have ever drawn!). The batteries are hidden inside the down-tube; electronics are located below the seat post.

But, I have found a new love – the Faraday Bike. This bicycle is the brainchild of Adam Vollmer who designed it for a competition in Portland, Oregon, to create the perfect commuter bicycle. It is made of lightweight steel tubing, it looks like a retro French bicycle, and it has (insert the drum-roll here) an electric motor hidden in the front wheel.

But it’s not an electric bike, it’s an electric-assisted bike. In order to cause the motor to power the bicycle, you must pedal. If you stop, the motor does nothing. And, it’s designed to respond to your level of pedaling. The harder you work, the more it helps you. 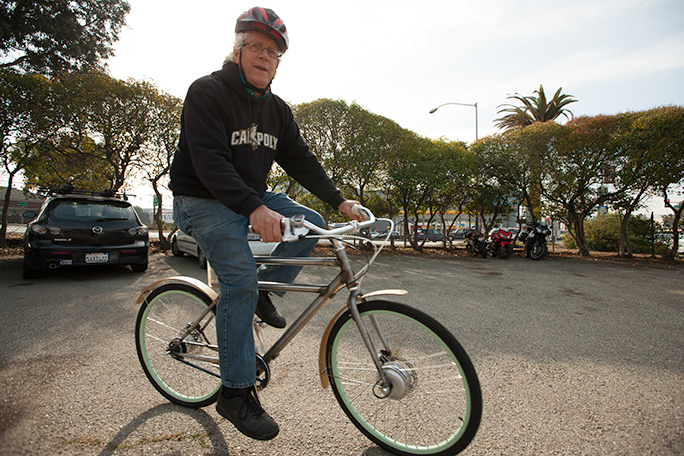 That’s me on the bike, riding in circles in the parking lot adjacent to Faraday’s headquarters in San Francisco. It was a beautiful day in San Francisco, and I enjoyed my test ride on the Faraday. Photo by Patrick Lawler

Vollmer’s company is headquartered in San Francisco, where bicycling is incredibly popular. It’s also the home of some of the steepest streets in the world, and that’s why the Faraday Bicycle is so smart in that city. He and a small corps of engineers have been tinkering on the design for several years, and I had a chance last Wednesday to take a test ride in San Francisco.

I signed the requisite legal release, put on my helmet, then headed out into traffic to see what this beautiful bicycle could do. I rode along Eighth Street, around the traffic circle, then headed up the steepest hill I could see – Kansas Street. That street is not so steep that it rates much more than being out of breath on a regular bicycle, but it was a great hill on which to try the Faraday. I shifted into a slightly low gear, I think it was 3, and pedaled up the hill. I was out of breath at the top, but it was much easier than riding my regular bike up a similar hill.

I then turned and rode back down, enjoying the feel of the disc brakes. My Globe has caliper brakes. Once I reached the bottom of the hill, I rode down one of San Francisco’s busy main streets, cruising at a comfortable 20 mph, and keeping up with traffic. I could feel the boost of the motor, but only slightly. I kept up with automobile traffic for several blocks, navigated back to the Faraday building, and returned the bike to its owners.

My ride was hard to describe. It wasn’t thrilling; it wasn’t like a rocket pack. It was much more subtle. I told the group at Faraday that it was like the invisible hand of Keynesian economics gently pushing me as I rode up the hill. I’m not sure that metaphor works for a bicycle, but it sounds sophisticated.

Faraday plans to make its first production run of these bicycles in early 2014. I’m on the waiting list. I am now figuring out how to pay for this beautiful two-wheeled wonder, and then where to put it. My wife and I live in a small house with no storage space. Something will have to go. Both will be a challenge!

Author’s note (February, 2017):
As you may know, the Specialized Globe bicycle mentioned in the story above was turned into a pretzel when I was hit by a pick-up truck on January 27, 2014. I spent the following six months recovering from a fractured pelvis while not riding a bicycle. In July of 2014 I bought a beautiful Celeste (blue-green color) Bianchi commuter bike. Then, a month later I took delivery of my own Faraday bicycle (serial number 35). I have been riding both bikes since then, and am absolutely in love with my Faraday! It’s the most beautiful and sophisticated bike I have ever owned. It’s nearly silent, and it’s like riding on a cloud – every day.

3 Responses to The Boy Mechanic rides a Faraday bike