We awoke yesterday and boarded a big green bus, heading north from Hong Kong into mainland China. Our objective was to visit three of China’s largest commercial printing companies, each known for quality and high volume.

Crossing the border from Hong Kong, which is treated almost like a separate country by China, is a curious affair. First, we left the bus, carrying our personal belongings, and we “left” Hong Kong through their customs station. Then we walked about 100 yards into the buffer zone between the two regions, and reboarded our bus.

After crossing the river that separates the regions at this point along the border, we entered mainland China, where we descended from the bus again, carrying our personal belongings, and “entered” China proper. It’s all very serious stuff, and I had to have a visa to make the trip. The visa was applied for, and acquired, in early October back in the U.S.

Once through Chinese customs you are warned “No Lingering” and “No refluence.” And, of course there is no photography allowed at this tactical location. Violators are punished by five years in jail, according to the signs.

At one point there was an X-ray machine, against which there was a sign indicating that “Baggages must be scanned.” I put my heavy camera case into the machine (“Film Safe!!”) and it came out the other end. As far as I could tell, no one was manning the machine. The other odd thing about this was that most of the locals walked right past the machine with their “baggages,” ignoring it altogether.

Once in China, we met up with our bus again, and proceeded north into Dongguan Province to visit the printing plants. The first was Hung Hing Printing Group Limited, the largest printer in the region (perhaps in the country). Located in Shenzhen, they employ 12,000 people at four plants in China. At the plant we visited they showed us their very impressive “showroom” which looks like a book store with toy boxes and movie point-of-purchase displays. In this room are thousands of samples of jobs the company has printed. They do nice work, and I am confident that I have more than a few books in my home library that were printed there. 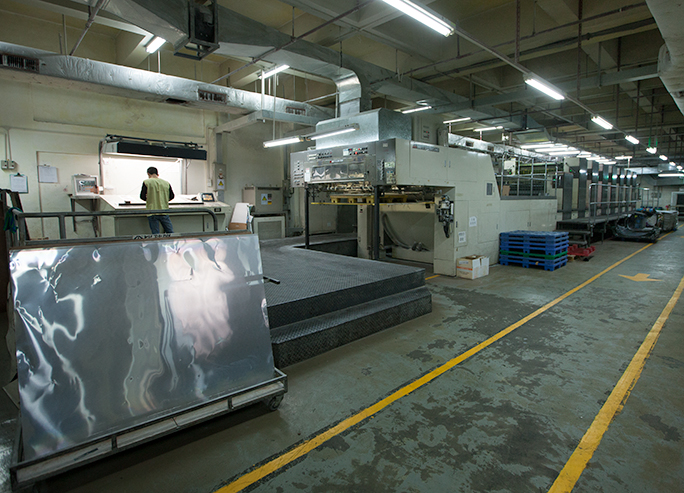 This is a Mitsubishi printing press at Hung Hing Printing in Shenzhen, China. The thing on the left is a 65-inch printing plate, evidence of the size of this behemoth. We saw several presses on this journey in sizes greater than the common 40-inch size.

Hung Hing’s Chairman, Matthew Yum, led our tour, and took us into the pressroom and the prepress area of the company. We saw about 25 sheet-fed presses there, mostly Heidelberg machines, and all 40 inches or greater in size. The pressroom was packed with presses in rows, punctuated by hallways for the delivery and removal of skids of printing paper.

Hung Hing also produces large-scale corrugated boxes, litho-laminate cartons, and many product containers printed first by lithography, then finished into folding boxes of various degrees of complexity. I was told that in the adjacent building were 6,000 employees doing hand finishing work.

Our cadre of color experts was interested in seeing the prepress area, so Mr. Yum led us to see the rows of platesetters, stacks of boxes of plates, and the workers making several thousand printing plates each and every day.

This was one of two plants we visited where I saw super-size platesetters, those capable of making 65-inch to 72-inch plates for the largest offset presses. The prepress manager explained how the company handles color, and how they make proofs and get customer approvals.

Our group in the lobby of Hung Hing’s printing plant in Shenzhen, China. This is probably the largest printer in the country.

After the Hung Hing experience, we drove for about 30 minutes to have lunch at a posh hotel in the area. There we were met by the CEO of our next plant, Mr. Peter Tse, who operates the family-owned China Translation and Printing Services company in the Dalang community of the province. Tse is a controversial figure in the Hong Kong printing group. The affable and very bright young man has made waves by installing two of the huge Hewlett-Packard web-fed ink-jet presses in his plant.

Everyone in the printing community knows about this installation, and they are all waiting to see what happens. Will Mr. Tse succeed with ink-jet printing? Will he gain market share with these unique machines? (They are two of three installed in Asia to date.)

Peter Tse, second from left, talks about the printing industry in China, and about his installation of two large scale HP ink-jet web presses at his plant in the Dalang community of Dongguan Province.

Over lunch, Mr. Tse explained to the group about Hong Kong and southern China’s economy, labor rates, living standards, and the pressures put on companies like his to raise the standard of living for the work force in his charge. Tse employs about 800 workers in his plants, and like the other firms we visited, provides housing and meals for those who run his factories.

After lunch we saw the plant, with its 25 mostly Heidelberg presses on the ground floor, packed like cordwood in tight rows. Workers pushed skids of paper along the aisles to the presses, which were generating literal tons of printing while we watched. At the end of the offset pressroom we walked through a corridor filled with waiting paper and jobs being shipped out, and we entered a large area cordoned off by clean-room curtains. A large electric door rolled up quickly as we approached, and we entered Mr. Tse’s digital headquarters. Here we saw the behemoth HP M-410 ink-jet web press, standing in a brightly lit room, waiting for a job to be processed.

This is one of 25 sheet-fed presses at China Translation and Printing Services. Note the ink-feed piping over each unit. All of the presses are connected to continuous-feed ink supplies.

In the adjacent room is the second HP ink-jet web press, a smaller 210 model, with a complete inline bindery system built into the large work room. On one end goes a roll of paper; out the other end come finished, perfect-bound books. The machine was running the entire time we were there, producing a paperback book for a publisher in Michigan, USA.

This is the larger of the two Hewlett-Packard ink-jet web presses installed at China Translation and Printing Services. This is the M-410, a 40-inch model. In the adjacent room is the narrower model 201 press, combined with inline binding and finishing equipment.

And, along the wall of the same room is a third HP press, a roll-fed Indigo pair of presses printing from a roll of paper, then feeding directly into a Hunkeler cutter-collator-binder, which was kicking out stacked, collated booklets on uncoated stock.

This machinery is truly revolutionary in our industry. The only consumables are ink and paper (and the occasional replacement of an Edgeline print head), and the products are clean, crisp printing done on a machine that creates essentially no waste (except the trimmings from the perfect binder). There is no make-ready, no dumpster for the over-runs, and the entire facility is kept extraordinarily clean.

I have seen the future here. 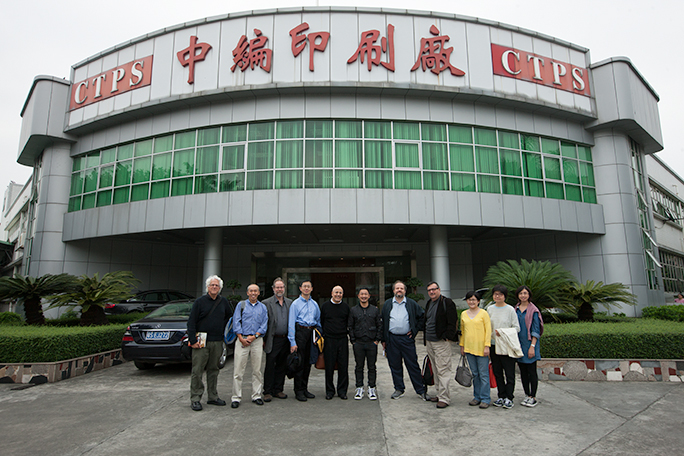 Outside China Translation and Printing Services in Dalang, Dongguan, China.

Our third stop was at Golden Cup Printing Company, located just 30 minutes away. Golden Cup is another very large printing plant that employs nearly 1,000 people. It also has Heidelberg presses lined up in rows in its cavernous press room. On the floor are steel plate runways for the paper palettes (I never saw a forklift on this trip). 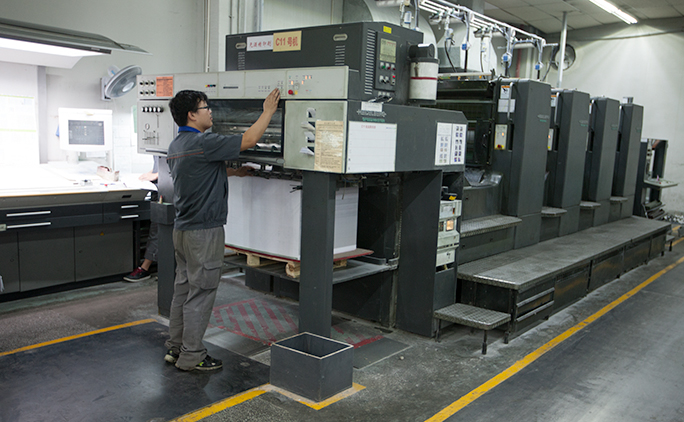 One of Golden Cup’s 25 sheet-fed presses. Notice the steel plate flooring where the skids are run. These plates line the floor of the entire pressroom.

The presses turn out gorgeous full color printing for books that end up in Europe and America, mostly. Again, a large-scale platesetter generates plates for oversize sheet-fed presses, and the company makes thousands of plates every day. Golden Cup was the only printer on our week-long tour that uses Toray waterless plates on several of their Heidelberg presses. These plates allow for waterless printing, with potentially sharper halftone dots.

After the tour we stood for our third group photo of the day, proudly posing in front of the company’s beautiful new building that houses their administration offices, planning department and reception. On the top floor they have a large assembly hall for the employees to use for dances and musical entertainment events. 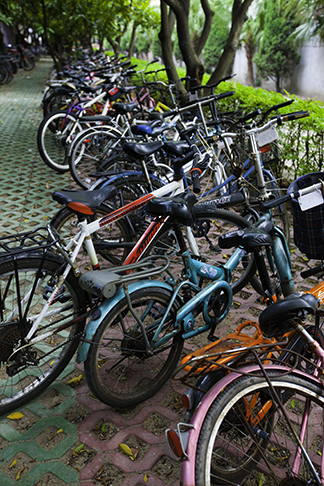 Workers park hundreds of bicycles outside the pressroom at Golden Cup Printing.

I was impressed by the hundreds of colorful bicycles lined up outside the Golden Cup press room. Co-owner Albert Yeung told me that some of the company’s employees prefer not to live in company supplied dorms, and to live in private apartments nearby. The bicycles are their commuting vehicles. 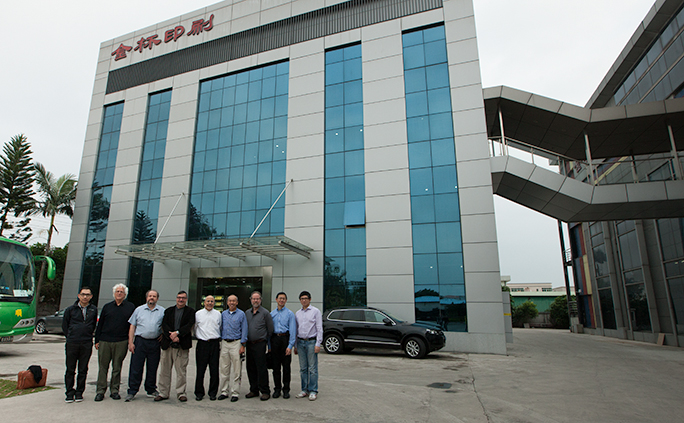 Our group poses outside Golden Cup Printing company. Their beautiful new building houses administration and an area for the employees to socialize.

We ended our day by traversing back into Hong Kong, and repeating the customs/immigration process again in reverse, arriving exhausted at our hotel in the evening. It was a day filled with about 75 sheet-fed printing machines, tens of thousands of printing plates, and a handful of new friendships that will last a lifetime.

I hope to refluence to this part of the world someday soon.