In my last blog I described the work of Sergeii Prokudin-Gorskii, a Russian photographer who documented Czarist Russia with a special three-color camera. His work took him over tens of thousands of miles, and he took thousands of photos. About 2,000 of them are now in the U.S. Library of Congress.

I thought I would try this technique, using a Canon digital camera and a set of color separation filters I found in my office at the university last week. 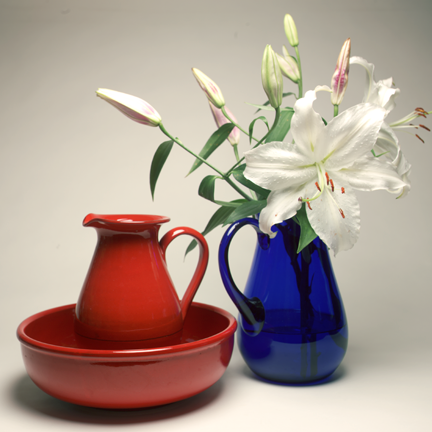 This photo is the result of my three-color experiment. Fortunately, the flowers and the vases sat very still for my experimentation.

The process of making color images with RGB filters is not new or even novel. But I had never done it. I had done the opposite many times, separating a color photo through these same filters to make Cyan, Magenta and Yellow color separations on a process camera, and later, on an enlarger.

These are the individual exposures: red, green and blue, made with my Wratten color separation filter set on my Canon 1ds Mark III camera.

In 1993, a company called Leaf (later owned by Scitex, and now by Phase One) sold a digital back for the Hasselblad camera that had a 2,048 x 2,048 monochrome sensor in it. At the time that was stunning resolution. When you purchased the camera back, you also got a motorized RGB filter wheel which would mount on the lens. To make an exposure, the software would tell the camera to take the first frame, through the red filter, then the second through the green, and the third through the blue. Then the software would assemble the images into an RGB image on the computer.

It worked great, and compared to shooting medium-format film, and processing, and scanning – it took a lot less time. The problem was that you could only take photos of things that didn’t move. I saw the Leaf camera in use once at a catalog production facility in Los Angeles. The company was shooting images of knickknacks, all of which stood still. I was told at the time that the camera had paid for itself in a few months by eliminating the film and scanning from the process.

Now, 17 years later, I am trying to recreate the work done by the Leaf camera, and about 100 years after Prokudin-Gorskii did it in Central Asia.

I set up my Canon camera, which has a setting for “monochrome” shooting. I put some nice vases and flowers into an arrangement, and lighted it with a strobe and a soft-box to diffuse the light. Holding the red, green and blue filters in front of the lens, I made a series of exposures, then went to the computer and assembled them by cutting and pasting the images into a new RGB Photoshop document. The results are extraordinary, which is to say very nice.

My first image worked nicely, with the exception of a very slight yellowish cast on the white paper background. I tuned that out with a color balance adjustment layer. Final product: very acceptable.

The camera, when set to “monochrome” really creates an RGB image that has been modified to be monochromatic in nature. When I transfer these images to Photoshop, they come up as color images in red, green and blue. But, there is almost no information in the non-specific channels, so I just take the prime color channel to the final image and discard the other “noise” that appears in the other channels.

I experimented with settings on the camera. When I changed to JPEG, the Canon delivers a monochrome image – just one channel. When I bring these into Photoshop and assemble them into a composite image, they are really lovely. They all require some white balance after assembly, but I write that off to impurities in the filters, or age, or both. (The filters were made in the 1970s.)

I’m very happy with the results. The photos look “painterly” and not quite like a routine digital image. I like the saturation and the color, and I like the overall tonality.

Later this week I am going to try some three-color photography of a live model, just to see if I can. Prokudin-Gorskii did it in 1915; I should be able to do it today!

Brian Lawler is an Emeritus Professor of Graphic Communication at California Polytechnic State University, San Luis Obispo. He writes about graphic arts processes and technologies for various industry publications, and on his blog, The Blognosticator.
View all posts by Brian Lawler →
This entry was posted in Art, Photography. Bookmark the permalink.