I just returned from a week in Chicago for GraphExpo, the huge North American trade show for people in the graphic arts industry. I shipped my big tripod and my GigaPan panoramic head to the hotel in advance of my trip so that I could take some panoramic photos while in Chicago. I have done this before, but never with the GigaPan.

On Sunday, October 7, I walked out of my hotel carrying my big tripod and my GigaPan rig, and a full bag of cameras. This was similar to my mountainous treks at home except that I was carrying the complete camera bag. It was my intention to take a taxi to the aquarium, but three taxi drivers refused to take me there, citing the Chicago Marathon as an excuse. Note to self: get in the cab first; they can’t refuse to take a passenger to his destination once the passenger is inside the car.

Being spurned by the cabbies, I walked all the way from my hotel on East Ohio to the aquarium, a distance of 2.65 miles, carrying the tripod on one shoulder or the other, and sometimes carrying it across my shoulders. When I reached the aquarium, I set up on the north side of the lawn, and began my two hour and 28 minute GigaPan experience. The sky was mottled gray, and the light was diffused and soft. These were good conditions for a panoramic photo.

I shot a 360-degree version first, to include the Adler Planetarium and the breakwater, and as I completed that one, the sky cleared to reveal a beautiful sunny day. So, I made a second panorama of just the Chicago skyline. I was shooting for a total of three hours and ten minutes, for a total of slightly more than 2,000 images. 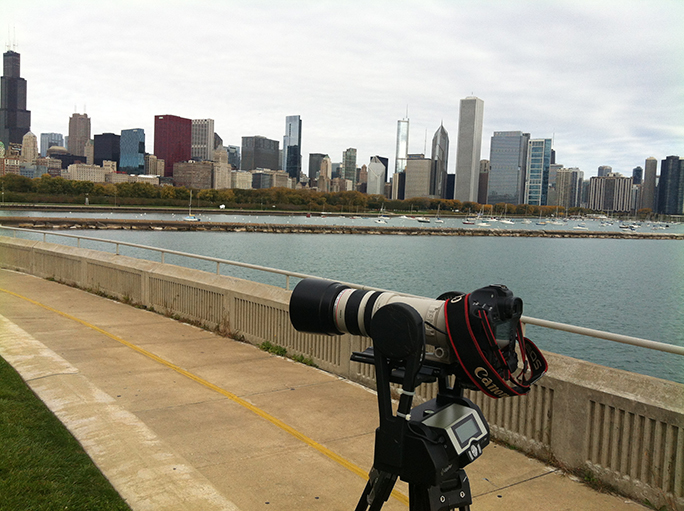 The GigaPan and tripod on the north edge of the Shedd Aquarium lawn. The view of the city of Chicago is spectacular here.

At hour two I was approached by two curious and courteous security guards who wanted to know what I was doing, and if I had “run this by anyone” at the aquarium (two of my tripod legs were on Shedd Aquarium property). I told them I had not run it by anyone, and that I was making a panorama of the cityscape in front of us. Then why, they wondered, was the camera pointing at the Shedd Aquarium building? It was down to the last 200 shots at that point, taking photos of the way-too-close stone wall and windows of the aquarium. I explained that it was a 360-degree image, and that it was finishing the back side of the photo at that point. I’m not sure my explanation made any sense. They looked at my ID, and they left, as courteously as they had arrived.

This is my clear sky version of the Chicago cityscape GigaPan. The full-resolution file is over 14 GB, and it has incredible resolution. Click on the image for a larger version. When it comes time to print this one, it can be reproduced at over 38 feet in width at 300 ppi resolution.

It was a chilly morning on Lake Michigan, with bitter winds blowing from the west across the lakeshore and over to the aquarium lawn where I stood. I was pretty well dressed, but standing still for over three hours in that wind was starting to take a toll on me. I was counting down to zero as my camera finally made the last shots to the north across the lake to the Navy Pier in the distance. When it was finished I packed it up and made my way quickly to the driveway of the building on the south side, and got into a cab before telling the driver where I wanted to go. The return trip to my hotel was uneventful; Lake Shore Drive was open (it had been all morning, despite what the other cabbies asserted) and I was back in my hotel in minutes.

I changed into my trade show garb and zoomed off again in the opposite direction to McCormick Place, and spent the next few hours manning the Cal Poly booth with my colleagues.

That evening, after transferring the thousands of images to my MacBook Air, I rested. I waited until tonight, Thursday, to put them into the GigaPan Stitch software on my desktop computer at home. It just didn’t make sense for me to process the images while staying in a hotel room. GigaPan Stitch software takes hours to run, and I didn’t need to add that burden to my journey to the Windy City.

I’m glad I stayed the extra half hour and took the second partial panorama. It turned out very nicely. The light is even, and the blue sky is lovely, dotted by just a few clouds that add a lot to the image.

This view of Chicago is simply gorgeous.

Brian Lawler is an Emeritus Professor of Graphic Communication at California Polytechnic State University, San Luis Obispo. He writes about graphic arts processes and technologies for various industry publications, and on his blog, The Blognosticator.
View all posts by Brian Lawler →
This entry was posted in Art, Panoramic Photography, Photography. Bookmark the permalink.

2 Responses to A Windy City GigaPan