In the Four Seasons hotel in Chicago last night I attended an interesting panel discussion on ink-jet printing of newspapers.

The event was hosted by Cabot, an international manufacturer of the components of ink. They make, among other things, carbon black, which becomes the primary constituent of printing ink, and is also used in the manufacture of tires and other rubber products. Apparently carbon black adds strength to rubber, and obviously it provides color to ink. The panel was moderated by Jim Hamilton of InfoTrends.

The occasion of the panel discussion was the first installation of a TKS ink-jet press in America. That machine has been installed in Chicago at a plant called Newsweb Corporation, a company that prints over 100 newspapers here. The TKS press is made in Tokyo, Japan, and this particular one was on display at DRUPA in Germany earlier this year.

The panel included Rodd Winscott, the President of Newsweb Corporation, who talked about the installation and the use of the press, which has been running for only one week in his plant. In addition to “hundreds” of offset publications, his firm prints about 30 non-English language newspapers, papers which are run in fairly short editions. According to Mr. Winscott, the new press is a perfect match for his firm’s need to print these short runs. He credited the TKS press with having essentially no make-ready, no change-over, no plates, and tremendous efficiency.

The TKS press, called the Jet Leader, has the ability to print every copy of a newspaper with different copy and photos on the sheet – a full variable-data newspaper. And, the simpler task of queueing up a number of short=run publications is the perfect use for this new machine. The Jet Leader can print in sections, and collate papers in-line, producing a traditional looking paper on the press. That, combined with the ability to control the cut-off length, makes the press quite versatile.

Without plates, the time to make plates, and the time to shut down one paper, and set up for the next, Newsweb’s new press is poised to be a more efficient producer of news publications at the Chicago plant. 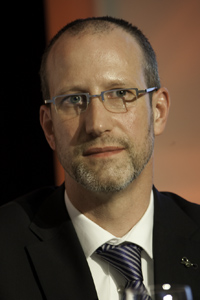 Another member of the panel, Oliver Baar, of KBA, Germany, spoke of the value that new ink-jet news presses bring to the market. His company will be shipping a new ink-jet press, built in collaboration with R.R. Donnelley. That press, called the RotoJet, shares many of the same capabilities of the TKS machine. Mr. Baar pointed out that the new ink-jet presses allow for printers to change their production philosophy from title-centric publishing – printing an entire edition of one newspaper at a time, to a shipping-centric production model. With the shipping-centric model, a printer could print an adequate number of titles of various newspapers on an ink-jet press based on the distance the delivery trucks need to travel. Getting the papers printed in any quantity and in any order would allow the truck traveling to the most distant distribution point to leave the plant first. Then production of the next-most-distant point could take place. Mr. Baar referred to this capability as a “flying job change.”

Because there is no change-over between publications, the press can print one copy, then change to the next publication, and print one copy, and so on, in any combination. It would be possible under this model to print any partial run of any publication in any order to fill a truck and get it on the road in the most efficient manner.

Newsweb’s week-long experience with their new TKS press shows that this can work. They printed a number of newspapers this week, with only one newspaper wasted in change-over (to underscore this comment, that is exactly one copy). That’s quite an accomplishment for a printer with many years of offset experience. Mr. Winscott said that on his traditional web presses, a change-over can take as long as an hour, including the time it takes to make numerous printing plates, to change those plates, and to complete the make-ready for the next publication. By contrast, the ink-jet press stops printing one paper, and begins on the next impression with no waste between jobs.

I was impressed by the optimism that the speakers had in discussing the reality of ink-jet press capabilities, and the near-term future of these very new machines. 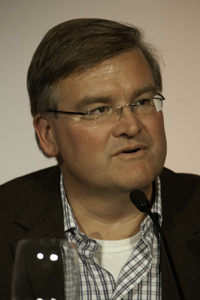 Paul Cousineau, Vice President for Prepress and Continuous Improvement at Dow Jones, spoke about his company’s quest to use ink-jet presses in their smaller market regions to print the Wall Street Journal and other publications. He made a point about how his firm has searched for the right combination of technology and suppliers who can put an ink-jet press into operation, and divorce the machinery from the supply charges. He commented that several of the other ink-jet production press makers (and I assume his was talking about Screen, Océ, Hewlett-Packard and others) want to sell ink at per-page prices and to charge “click-charges” for the operation of industrial-scale printing machines.

Both TKS and KBA will be installing their machines without supply tie-ins or these click charges.

Mr. Winscott siad his firm was unwilling to purchase a printing press from a manufacturer with a requirement that his company buy ink from them, or to pay per-page fees. 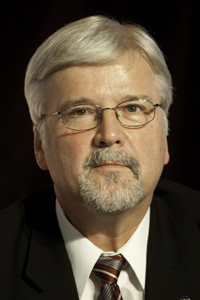 Also on the panel was Mike Shafer, Director of Sales and Marketing for TKS. His company took the approach of making a newspaper press like an offset press, one that has variable cut-off, the ability to gather printed pages into signatures, and to fold and deliver a finished newspaper that both looks and feels like a conventional paper. His company makes offset news presses with the ability to do all of these things. Changing the press to an ink-jet device meant only the imaging components had to be engineered and built. The other components were supplied by those divisions of TKS that were already making them for conventional presses. The TKS press is sold without string attached; the buyer is free to purchase ink from any qualified supplier, and there are no click-charges for running the press.

I have not had a chance to visit the Newsweb plant in Chicago, but I plan to visit as soon as I can make arrangements to do so. I look forward to seeing the new machine in operation. In the short term, I came away from the panel discussion last night with the knowledge that our industry has accepted ink-jet technology in a big way, and the presence of a working news press that uses ink-jet technology is the first step in an exciting future for the industry.

It’s no longer just talk – this press is in full production.

Brian Lawler is an Emeritus Professor of Graphic Communication at California Polytechnic State University, San Luis Obispo. He writes about graphic arts processes and technologies for various industry publications, and on his blog, The Blognosticator.
View all posts by Brian Lawler →
This entry was posted in Business, New technology, People, Printing and Printing Processes. Bookmark the permalink.