This episode originally appeared on What They Think in February, 2011

This is my last blog on masking. I promise. At least for a while.

My challenge today was to mask a photo of ingredients for a recipe in a cookbook, dropping the background, and replacing it with a colored gradient. 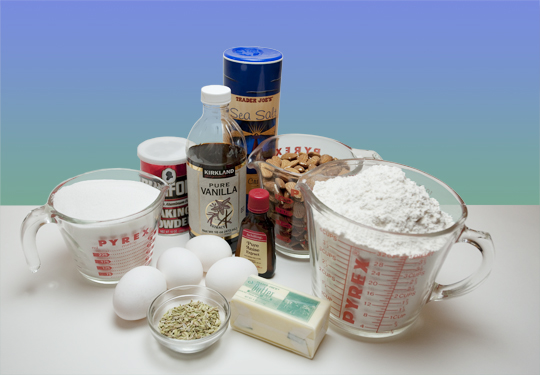 This is the finished photo with its replacement background. This one was particularly tricky because the glass measuring cups and the vanilla bottle have variable transparency. The mask must allow some of the background through, but not all.

This would be an easy mask were it not for the transparent measuring cups and bottle, which must be masked differently to allow some of the background through. This is one where most of the work has to be done by hand, and this one took me about 30 minutes to complete.

I could use MaskPro for the basic shape, and I did that. But the interior shapes of the glass containers I did by painting with a brush with various gray shades to allow more or less of the background to show-through. More for the clearest containers, less for the more opaque containers.

An easy way to draw these masks is to draw with solid black, and then to select the black interior spaces with the Magic Wand, and then change the solid black into a gray value according to the amount of transparency I want. 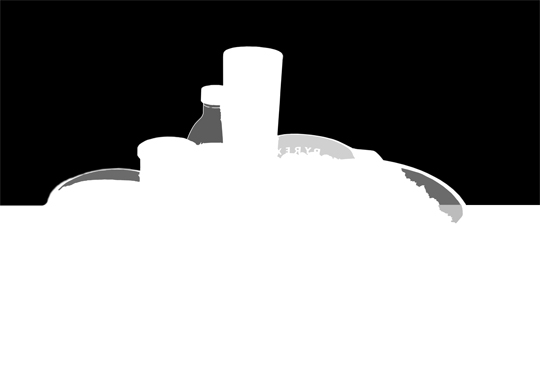 This is the mask. Notice the work along the edges of the glass and plastic containers. Varying amounts of gray allow the background to show-through.

Extreme attention to the way light wraps around the salt cylinder is important. There is a bit of a glow along the edges as the cylinder rolls around the edges. I experimented with a very hard edge at first, then drew a softer version to allow some of the glow to show, and it makes the salt look more natural. This softer mask allows the photo to look more realistic. The edge of the baking powder can also needed a bit of softening to make the edge look realistic and not “cut out.”

For almost all of this I used a simple paint brush, varying the hardness of the brush according to my need to make edges look “real.”

Brian Lawler is an Emeritus Professor of Graphic Communication at California Polytechnic State University, San Luis Obispo. He writes about graphic arts processes and technologies for various industry publications, and on his blog, The Blognosticator.
View all posts by Brian Lawler →
This entry was posted in Photography. Bookmark the permalink.