I was driving at about 60 mph on Highway 101 south of Salinas, California today, when I saw what appeared to be a Linotype keyboard in my rear-view mirror.

Yes, it was a Linotype keyboard! attached to the rest of a complete Linotype machine, rushing down the freeway. And, yes, it was in my own truck! 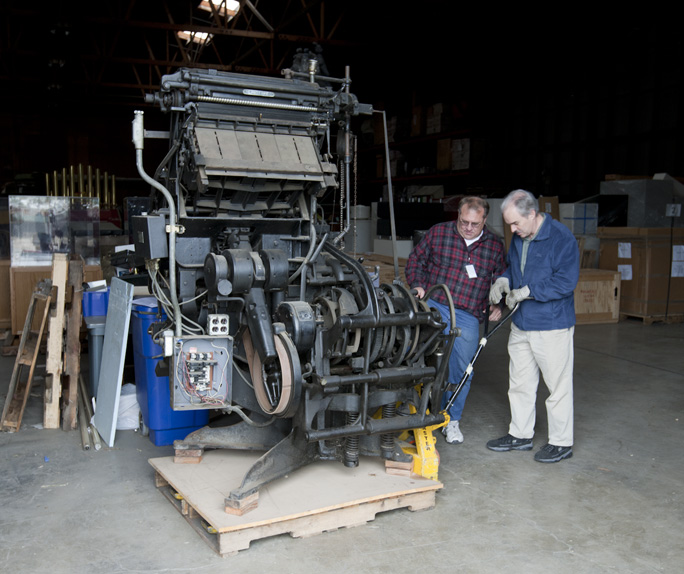 This is the “new” Linotype machine in the warehouse in San Jose. We machinery movers had a relatively simple job of mounting it and loading it into a truck this morning.

I picked the machine up this morning at History San Jose, a public museum in the city of San Jose, California. That organization is placing the machine on indefinite loan to the Shakespeare Press Museum at Cal Poly. 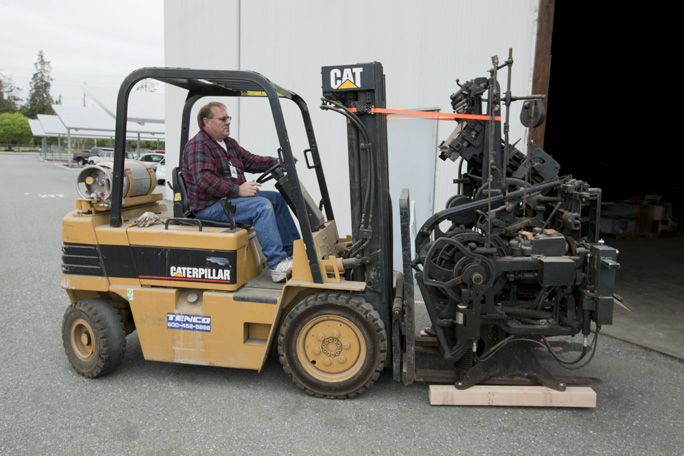 The 3,000 lb. Model 31 is moved from the warehouse to the back of my waiting pick-up truck by Ken Middlebrook of History San Jose.

The machine is an operational Model 31, originally manufactured by Mergenthaler Linotype Company in Brooklyn, NY, in 1931. It is fitted with a Star Quadder and four magazines of matrices. It has an electric pot and a 110V motor. The last time it was running was about five years ago.

This will be our second Linotype machine, the other being a Model 4 that is not capable of setting type, or even cycling through the process. That is a “teaching machine” with many of its key parts removed for access to the internal workings of the machine. I remember using that one as a student at Cal Poly in the early 1970s. 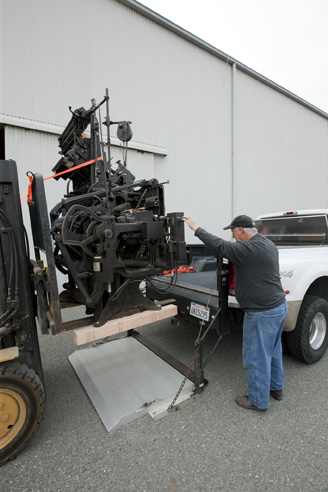 Tom Goglio, a retired Cal Poly lecturer, guides the Linotype machine into the back of the waiting F350 truck. The lift gate ended up getting in the way, but we managed to lift the machine over it and into the back without incident.

Cal Poly has a wonderful working printing museum on the ground floor of the Graphic Arts Building, a museum that has been open and operated by student curators since 1969. We have 18 working printing presses, numerous binding machines, and a collection of over 600 fonts of metal and wood type.

And now we have two Linotype machines that we can point to, and explain to visitors. 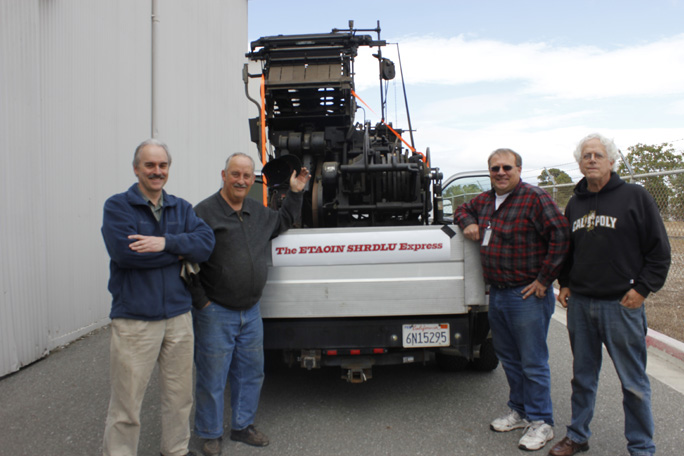 Celebrating our success, from left to right: Jim Gard, Tom Goglio, Ken Middlebrook and Brian Lawler. The ETAOIN SHRDLU Express did a great job of delivering the machine to Cal Poly for the Shakespeare Press Museum.

This new machine will be added to the collection tomorrow morning, and will become an example of the second-most-important machine in the history of printing (in my opinion). It will take its place in the museum, replacing an Intergraph machine that will be sent to another museum on loan.

It took several years to acquire this machine, a result of some light negotiations, some fear of “scrapping” the machine, and the efforts of my good friend (and retired Cal Poly lecturer) Tom Goglio. Ultimately, the decision to loan this machine to Cal Poly was made by Jim Gard, a driving force at History San Jose, and Ken Middlebrook, the organization’s technical guy and manager.

And, once the decision was made to lend the machine to our museum, things happened quickly. It was just a few weeks between the call, and the pick-up.

I drove up to San Jose in the dark of morn today, and we loaded it up. For the journey, I borrowed my friend Jim Eckford’s heavy duty Ford F350 dual-rear-wheel truck. This truck, according to its manual, can handle a load of just over 6,200 lbs. in the center of its bed. The Linotype machine weighs about half that. It felt heavier on the road.

We bolted the Linotype machine to a fresh pair of skids, then Ken Middlebrook lifted it with the organization’s fork lift, and we gently squeezed it onto the back of the truck. It cleared by about an eighth of an inch.

Loading took about an hour, and soon the machine was resting in the back of the truck. I strapped it to the bed with those clicky nylon straps that give you confidence that your load will not shift on a truck. But, in my heart of hearts I knew that these straps would snap like dental floss if the Linotype decided to shift in the bed. There is nothing worse than 3500 lbs. of angry cast iron!

I drove carefully and (relatively) slowly, and returned to San Luis Obispo. The trip, which normally takes about three hours, took me more than four. But, the load arrived safely and we will be unloading the machine in the morning.

I had only one person notice the machine on the road, a fellow passed me and gave me a big thumbs-up sign. Grinning, I responded in kind.

In the coming months I will be working with several other old coots like me who know a little about Linotype machines. We’ll polish this one up, and we’ll rewire it, and we’ll see if we can make it run again.

Brian Lawler is an Emeritus Professor of Graphic Communication at California Polytechnic State University, San Luis Obispo. He writes about graphic arts processes and technologies for various industry publications, and on his blog, The Blognosticator.
View all posts by Brian Lawler →
This entry was posted in Education, History, Typography. Bookmark the permalink.

2 Responses to The ETAOIN SHRDLU Express