My week with the Gigapan, schlepping

I’ve been schlepping my big video tripod (25 lbs.) up and down mountains this weekend, carrying the Gigapan Epic Pro mount (about 5 lbs.), and also carrying my camera bag (13 lbs.) which has my camera and lenses and an old banana peel in it. 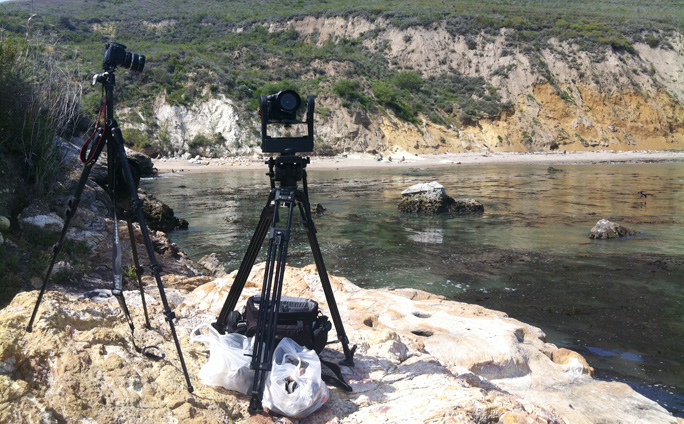 My position in Pirate’s Cove, near Avila Beach, California. This beautiful spot was ideal for making a panoramic image. While the camera was making 504 images, I picked up two bags of litter from the rocks – fishing tackle, beer cans, cigarette butts, broken glass. When I climbed back up the hill I looked like a photographer-Bedouin.

And, this equipment is getting on my nerves. It’s an awful lot of weight to carry for the purposes of shooting a panoramic image. My normal rig is a carbon-fiber tripod with a Really Right Stuff head on it (about 4 lbs.) and my wooden panoramic head (.75 lbs.). I still have to carry the camera and lens, but the whole thing doesn’t cut into my shoulder blades like the big tripod does. I noticed in the mirror this morning that I have bruises on my shoulders.

Click above to see a short movie of the Gigapan device as it moves my camera around a panorama. It takes a few minutes to download to your computer, so please be patient.

On Sunday I took a photo at a local beach area called Pirate’s Cove. This is a beautiful, quiet beach with several McMansions above it on the bluff. I was clambering down a hill to get to the rocky side of the cove when I realized that I was breaking through shoulder-high poison oak bushes. That, I thought, would complicate my project, but I forged ahead, making it safely to a rocky section of the cove where I made a Gigapan image of 504 images (63 rows of 8 columns). Two days later I have had no outbreak of Poison Oak, so I passed that test.

This is one version of my panoramic image at Pirate’s Cove. This one was made by the Gigapan motorized head, but then stitched in PTGUI Pro. I made 37 horizontal images on the Gigapan in one row, then put it together in PTGUI. The scallops on the end indicate that I should have taken a few more images into the hillside, and then cropped the ends square.

My folders of hundreds of images are brimming with files. I shot everything in Camera Raw, which allows me to convert these images into other formats for stitching: Gigapan software requires JPEG, PTGUI prefers TIFF. I feel safer with Raw images because I can adjust exposure, change shadow depth, and more. The size of all of this is mind-boggling. I continue to move, duplicate and duplicate again folders measured in the gigabytes. But, that is a small price to pay for the ultimate high-resolution panorama. I would hate to go out and make a huge collection of component images, and then not be able to use them because they were slightly overexposed.

The Gigapan stitching software is amazingly slow. To stitch my first image took about half a day. I had to tell my Macintosh not to sleep so that the stitching software wouldn’t pause in its multi-hour process. When it was finished, I uploaded the image to the Gigapan web site as a “private” photo, meaning that I’m not sharing it with the world – yet. The panoramic projection created by Gigapan is spherical, and I always have a problem with images like that. I don’t really want to look up into the blue sky. I want this to be a long horizontal panoramic of stunning resolution.

Obviously I need to learn more about the Gigapan process, being one method to get bigger, higher resolution panoramic images.

Brian Lawler is an Emeritus Professor of Graphic Communication at California Polytechnic State University, San Luis Obispo. He writes about graphic arts processes and technologies for various industry publications, and on his blog, The Blognosticator.
View all posts by Brian Lawler →
This entry was posted in Panoramic Photography, Photography, Software. Bookmark the permalink.