John Warnock and Jim King, both of Adobe Systems Incorporated, are recipients of the Michael H. Bruno Award for 2012. 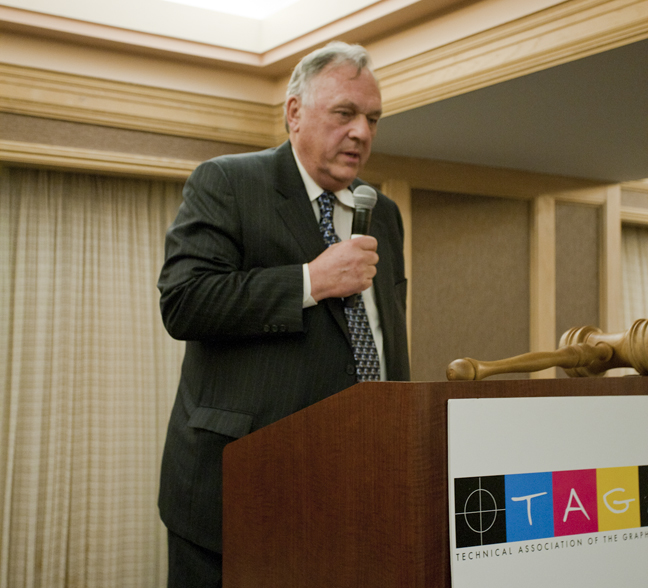 Jim King of Adobe Systems accepts the Michael H. Bruno Award at the 64th Technical Conference of the Technical Association of the Graphic Arts in Jacksonville, Florida in March. King, and his company’s founder John Warnock, both were honored by TAGA for their contributions to the graphic arts industry.

At the 64th annual Technical Conference of the Technical Association of the Graphic Arts (TAGA), the organization presented its highest award to a pair of scientists from Adobe Systems.

John Warnock, co-founder of Adobe, and James C. King, Adobe PDF Architect, are both recipients of this year’s award, which is given for technical achievement in the graphic arts.

Warnock was not able to be present for the presentation, but Dr. King was given his award on Tuesday evening at the Jacksonville, Florida event.

James King was one of the first people to receive a Ph.D. in what we now call “computer science,” a degree he received from Carnegie-Mellon University in 1969. After graduation, he went to work at the Thomas J. Watson Research Center at IBM’s facility in Yorktown Heights, NY.

In 1978, King moved with his family to work a IBM’s San Jose, California laboratory, which he managed for eight years before leaving IBM to work at Adobe Systems.

Dr. King was instrumental in the development of PostScript Level 2, which added many features to Adobe’s page-description language, making it more useful to the graphic arts industry. The upgrade added support for color management, Asian language typography, improved halftone-rendering, and more.

Joining forces with others from the budding desktop publishing field, King was involved in the founding of the International Color Consortium, an organization that was critical to the creation of color standards and systems that are still in use today. 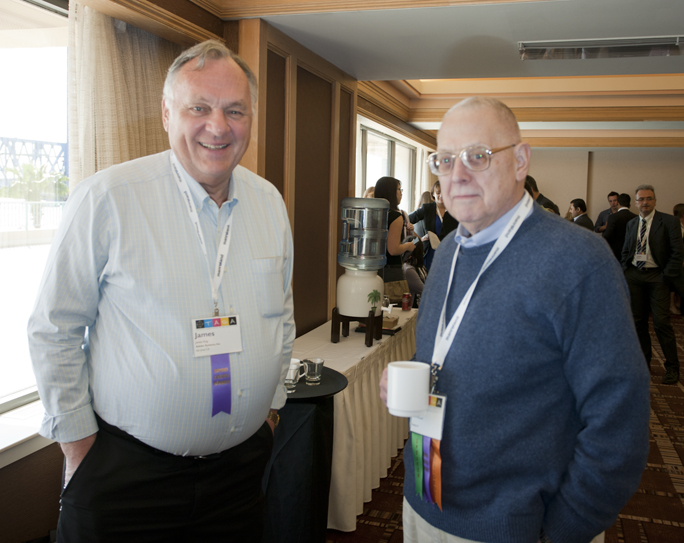 Adobe’s Jim King chats with David McDowell at the TAGA Conference in Florida.

In 2007, Dr. King was named Adobe PDF Architect, and he worked with a team of computer scientists to make PDF into an international standard for page description and display. In 2008, this work led to the creation of the ISO 32000 standard. He and his team continued to perfect the standard, resulting in the revised 32000-2 in 2010.

The Bruno Award has been presented to 76 individuals since 1976, the honorees being chosen by the board of directors of TAGA for their contributions to the science and technology of the graphic arts.

Dr. Warnock expressed his regrets that he could not attend the event due to a scheduling conflict.

Brian Lawler is a Professor of Graphic Communication at California Polytechnic State University, San Luis Obispo. He writes about graphic arts processes and technologies for various industry publications, and on his blog, The Blognosticator.
View all posts by Brian Lawler →
This entry was posted in People. Bookmark the permalink.