In April, my students and I visited the Landesamt für Digitalisierung Breitband und Vermessung in Munich (Read that story here). In English, this is the state office of digitization, broadband and surveying. Among the things they do is to manage Geographic Information Systems data for the state of Bavaria. They do aerial laser mapping, conventional surveying, and digital data dissemination for those who interject digital data about the real world into studies about population, land use and much more sophisticated work. 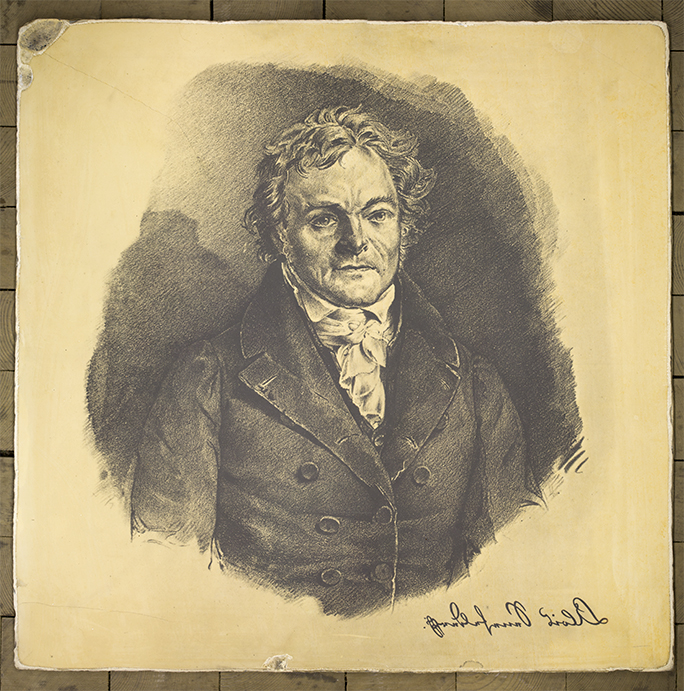 Another thing they do is to maintain an archive of over 27,000 limestone printing plates that were created in the late 18th and early 19th centuries. These stones contain images of the land of Bavaria – they are maps that were used in the 19th century for property line records, and ultimately for purposes of taxation.

The stones (or the images from the stones) were photographed a long while back, and are archived in a database of mapping information that can be accessed by the workers at the LDBV, and the public can order beautiful prints of the historic data.

The limestone slabs, each about 30 inches on a side and about three inches thick, weigh about 250 lbs. each. Thet were quarried at the famous Solnhofen Quarry, an operation that is still producing limestone for construction – and for printing plates. 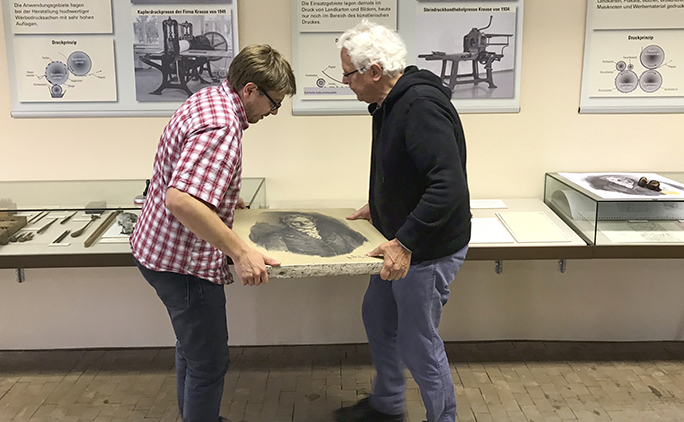 Sebastian Söckler and I lift the limestone plate with the image of Senefelder from the display case.

When I visited the LDBV in April I was impressed by a limestone plate on display in a glass case in the press demonstration room. On the stone is a portrait of Alois Senefleder, the inventor (more properly discoverer) of lithographic printing. He was a German born in Prague in 1771 when that city was part of Germany. The son of an actor and playwright, Senefelder took up the trade and began his own theatrical work. But the cost of reproducing texts and scores for his performances proved too costly for Senefelder, so he developed a new method for printing that did not require the tremendous skill and experience of copper engraving or type-casting and typesetting used by printers at the time.

His method for printing involved nothing more than drawing (backward) on a polished limestone surface with a grease pencil. Then, by applying ink (oil) and water in turn to the surface of the plate, one made a printing surface which when applied to paper with a lot of pressure, would transfer the image to the paper (and some of the water also). This technique provided a new method for printing that was of high quality but is relatively inexpensive. The process is still in use today, though we use thin aluminum plates now instead of three-inch thick slabs of limestone. 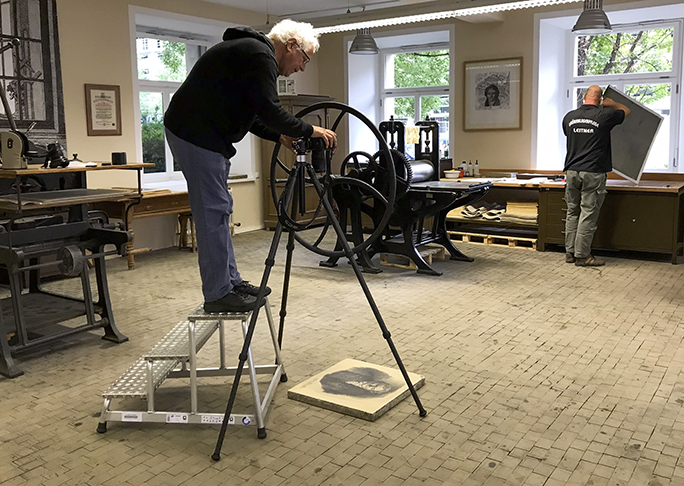 My set-up for making the images of the Senefelder stone. I took four images for each final file, each a quadrant of the original. The camera is a Canon 5D Mark III with the Canon 100mm f2.8 macro – their sharpest lens. Photos by Patrick Lawler

I asked, back in April, if there was a digital image of the Senefelder portrait-on-stone that I could acquire. Later in the week I was told that the LDVB did not have such an image. But, my contact, Sebastian Söckler at the LDBV, told me I was welcome to return to their office and photograph the stone myself!

So, last Tuesday afternoon I returned to the LDBV with camera and macro lens in hand, along with my trusty Really Right Stuff tripod. Once set-up, Mr. Söckler and I removed the glass case from the cabinet and lifted Mr. Senefelder’s stone from the cabinet. We placed it on the floor where the light was acceptable (rather primitive, but acceptable).

Then, with he assistance of my son Patrick, I took a series of photos of the stone. I shot it in quadrants with the intention of stitching it back together in Adobe Photoshop. Patrick held a sheet of translucent plastic over my camera to diffuse the fluorescent light from above. The result turned out to be better than acceptable. The final image is excellent.

Once I had finished my images, we lifted the stone – which weighs about 80 lbs., – back into its display case and returned the glass display box on top.

Now I have a nice image of the portrait of Alois Senefelder that resides in the LDVB in Munich (and they now have that image also). With this I can teach about the importance of this man to the history of printing. In the third week of September, back in California, I will project Senefelder’s image onto the screen in my GrC 101 class and tell the students about the accomplishments of this gentleman, and the importance of his work on our industry.