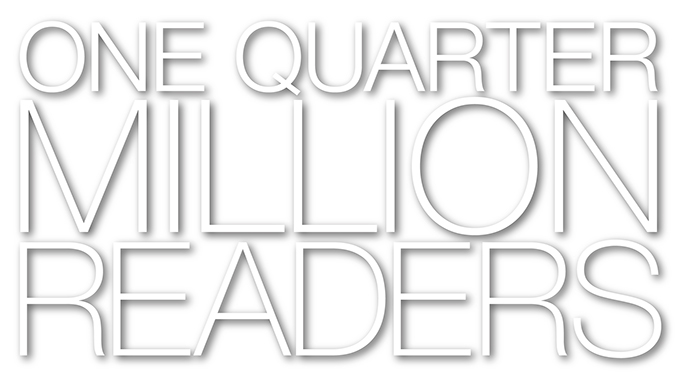 This morning, almost exactly six years after my first blog on the Blognosticator, the site has received its 250,000th visitor. Thank you!

I began writing blogs for Graphic Arts Monthly magazine in 2008, and the blog grew at that publication to have a loyal following of hundreds of readers. Epson was my sponsor for that blog. Midway through my career writing for Graphic Arts Monthly, the publisher asked me to write additional blogs for their sister publication, Converting. I did that for over a year. It was a great assignment, and it introduced me to the world of online reporting.

Unfortunately, Graphic Arts Monthly and Converting went out of business. My blog died with them, but the publisher returned all of my manuscripts (and the copyrights) to me.

I was a blogger without a forum. A few weeks later I was attending a conference in Philadelphia and there I ran into the editors of What They Think, a company that publishes a number of online publications for the graphic arts industry. They offered to pick up my blog and continue to publish it. I accepted, and was soon back online, publishing under the new monniker The Blognosticator.

The recession had hit our industry pretty hard, and it didn’t miss The Blognosticator. A few months later I was back on the digital street, a writer without a forum. I waited a few months and finally decided to put The Blognosticator on my own server – certainly I could get Epson back as a sponsor (never happened). I downloaded a WordPress blog template and practiced a few times. Then I posted my first new blog here. It worked!

I secured the blognosticator.net and blognosticator.org domains. Blognosticator.com is owned by a person who wants to sell it for a quite a bit of of money; I was unwilling to pay enough to acquire it. The two URLs have served me well, as have search results on Google and other search engines which find me quickly (Brian Christopher Lawler, the professional wrestler, always comes up ahead of me).

My Internet service provider leases my site to me with unlimited storage, so I can put a lot of blogs and images there without exceeding my server space, and the speed of their access is very fast, so there is never a problem with data throughput. It all fits together nicely.

Here are some interesting facts about The Blognostcator:

I have written and posted 254 articles on the site. There are 481 legitimate comments on the site. In the six years that the site has been running I have had an astonishing 470,320 spam comments, many of them “malicious.” I pay the WordPress organization through their Akismet group to filter those spam attempts, and they have an impressive 99.5 percent success rate. Spam comments, for the uninitiated, are comments sent in that have embedded links to web sites that sell counterfeit merchandise and other things. It’s tiresome to deal with these, but Akismet identifies and supresses most of them without my involvement.

My best day for readers was April 30, 2012, when 856 readers visited the site. I’m not sure what was so exciting that day. I had just written my first blog about the GigaPan, a robotic camera mount that I use to this day. The previous day I had written about the demise of Nikon Scan software and the Dear John letter that Quicken had sent to Macintosh users telling them that Quicken for Mac would no loner be supported, and inviting them to buy a Windows machine as the solution.

On most days I get between 150 and 250 readers, with recent peaks approaching 300 readers. 176,633 unique readers have visited the site from 214 countries. The most common is the U.S., followed by Great Britain, then Germany. Tonga is my least common country of origin, with only one reader. I have never received a visitor from North Korea.

Tuesday at 10:00 a.m. is the most common time for readers to visit (I don’t know which time zone). My statistics program offers no explanation for this Tuesday morning phenomenon.

I have the stats program ignore me, so the ten zillion visits I have made to my own blog are ignored. I check in often to find and correct errors in my work.

My best-read blog is one I wrote on July 22, 2012 about the practice of putting numbers in parentheses after they have been presented in prose. On a typical day I get 30 to 40 readers for that blog, and it is the one with the greatest number of comments – 75. That blog is also my most controversial; this topic gets a lot of attention, and people have strong feelings about the subject.

The second most common blog is one I wrote about the Macintosh operating system being able to repair damaged JPEG images (It can’t do this anymore). That one is slightly more popular than the blog I wrote about mounting large prints on foam-core.

I have spent six years writing blogs that inform and educate readers, and I will keep doing it. Why do I do this? Obviously it’s for the money. Oh, I forgot; there isn’t any money.

Thank you, dear readers, for reading these things. I am happy that you find it interesting.

Brian Lawler is an Emeritus Professor of Graphic Communication at California Polytechnic State University, San Luis Obispo. He writes about graphic arts processes and technologies for various industry publications, and on his blog, The Blognosticator.
View all posts by Brian Lawler →
This entry was posted in Uncategorized and tagged 250000 readers, Blognosticator, Brian Lawler, milestone. Bookmark the permalink.