Several of my students joined me and my colleague Prof. Martin Delp today for a tour of the Landsampt für Digitalisierung, Breitband un Vermessung, the Bavarian office for digitization and surveying. Here, the government creates maps, collects and distributes digital geographical data, and prints maps, charts and various related things for data analysis, mapping software (including cell phone mapping) and aviation “sectional” charts. for the state of Bavaria. 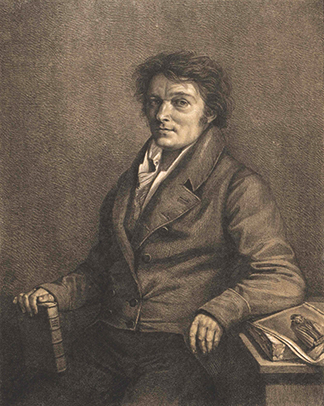 This facility is also houses the Bavarian archive of lithographic stones created between the early 1800s and the late 1900s for mapping the state. There are 26,000 slabs of Solnhofen Limestone stored underground here in a vault that is a designated national treasure of the people of Germany.

Bavaria is mapped on litho stones at a scale of 1:5000. There are 18,000 stones (each one a “plate” for lithographic printing) at this scale, and many more at double scale of 1:2,500. Every square meter of Bavaria is written on stone, and curiously, not a single stone is missing or broken, this despite the building being bombed at the end of World War II by the Allies. They are all still intact.

Professor Delp and Sebastian Söckler explore the operation of a 150-year-old lithographic press in the Landsampt for Digitalisierung office.

On the street level of the same building are a few hand presses, each capable of printing images from letterpress, intaglio (copper engraved plates), or lithographic plates (either limestone or aluminum). We were given an opportunity to see these presses, and to touch and explore several lithographic stones on display there.

Our host was Sebastian Söckler, a graduate of the Hochschule München, who is now a printing engineer at the facility, and who is very knowledgeable about lithographic printing, platemaking and imagery. He was an extraordinary host who explained how images are imparted to stone, how the stones are prepared for printing, and how the presses work. 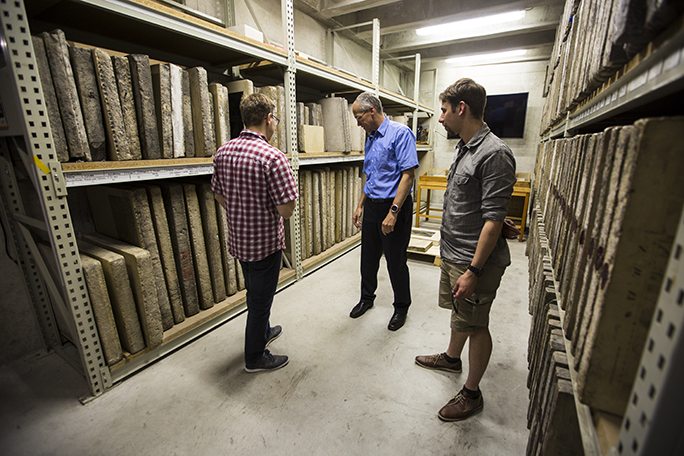 The collection of lithographic stones is stored below ground in a special warehouse that protects this priceless archive of original images for lithographic printing.

The Landsampt für Digitalisierung has printed and scanned all 26,000 lithographic stones, and the archive is a public resource. It’s possible to order a print of the scan of your neighborhood anywhere in Bavaria.

Invented, or more correctly, discovered by Alois Senefelder in the late 18th century, the lithographic process does not use a raised or recessed image, but instead uses a polished limestone surface with an image made by either chemical or mechanical etching on the surface. The image is made to accept ink (the oleophilic component) while the non-image area of the stone (the hydrophilic area) is left to hold water in its microscopic pores (about 250 grains per cm. or 1,200 per inch “resolution”). It is the balance of ink and water that makes lithography work.

This is a typical image on a stone – this one is of Moosburg – that shows the detail of these beautiful maps. I reversed the imge in Photoshop to make it legible; lithographic stones are imaged backwards.

To print from a litho stone, one sponges water onto the surface, then follows that with a roller covered with oil-based printing ink. The water and ink are kept in balance by adding more water or more ink to the surface. Once the image is inked, paper is positioned on top of the plate (directly in contact with the stone) and pressure is applied with a bar that forces down on the paper as the carriage holding the stone is moved underneath.

After impression, the paper is removed with its image (and a considerable amount of water) on it. Allowed to dry, the water evaporates and the ink dries in place, making a printed work of tremendous quality.

The office runs their antique presses for occasional public events. We were able to dampen the plate today, but not to print, as the press was not set up for printing. 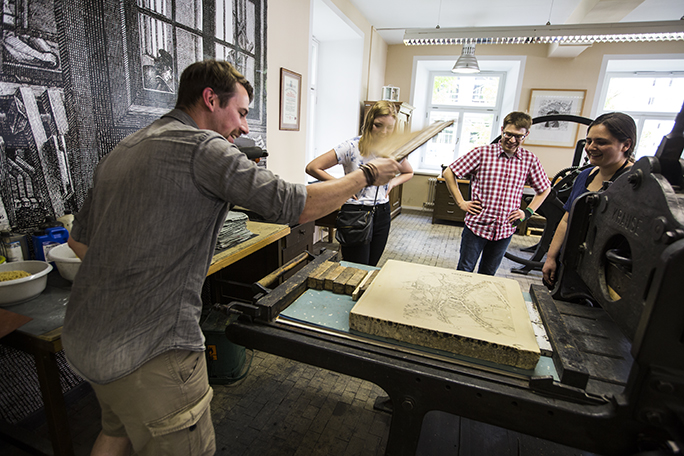 Martin Hämmerle, one of my students from Hochschule München, waves the hand-fan over the litho stone to dry it. The press is a 100-year-old machine in the collection of the state agency.

We were then taken to the underground storage of the slabs of limestone, each one weighing over 400 lbs. On the wall is a chart showing the state of Bavaria and its mathematical coordinates that correspond to a specific limestone slab. Those slabs are stored in rolling storage shelves that have the stones placed vertically in rows. Over 200 square meters of space house the collection which is kept cool and dry to preserve the images on the stones.

It was interesting to think that the inventor of lithography, Alois Senefelder, once worked on the stones in the archive. That Senefelder himself made some of those images gave me an awesome feeling. He was here! Well, perhaps he was not not here exactly (this is a modern building), but his hands made the images on these stones. these are not replicas; these are the real thing.

It was another day of discovery for me and for my students. We stood at the place where lithographic printing was first developed. It will leave a lasting impression on all of us.