270° of the Alps in one panoramic photo

Yesterday my wife and I ventured south from our temporary home in Munich to the German Alps. We traveled by Deutschbahn trains, and a bus (construction on the rails required this) and then another train to the town of Garmisch-Partenkirchen. From there we took yet another train to the Grainau station where we boarded a cog-wheel train that travels up, and then through Germany’s highest mountain, the Zugspitze. 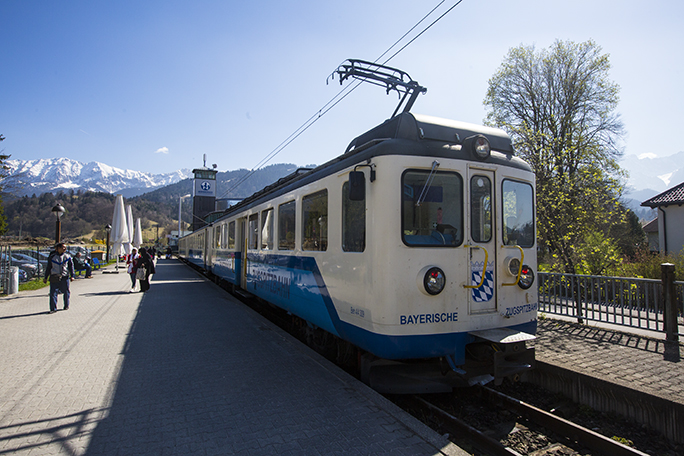 This is the Zugspitzbahn train at the Garmisch station. This one does not use the cog-wheel drive mechanism. We changed trains further up the canyon to get that train.

The cog-wheel train, run by electricity from overhead catenary cables, uses a pinion gear in the center of the trucks that engages fixed rack gear teeth in the center of the rails. The gear drives the train up and down the tracks, and prevents it from slipping on the rails (normal trains cannot climb more than a few degrees). This train climbs on grades as steep at 25 percent, meaning that it climbs 2.5 feet for every ten feet of horizontal travel, which is extraordinary. 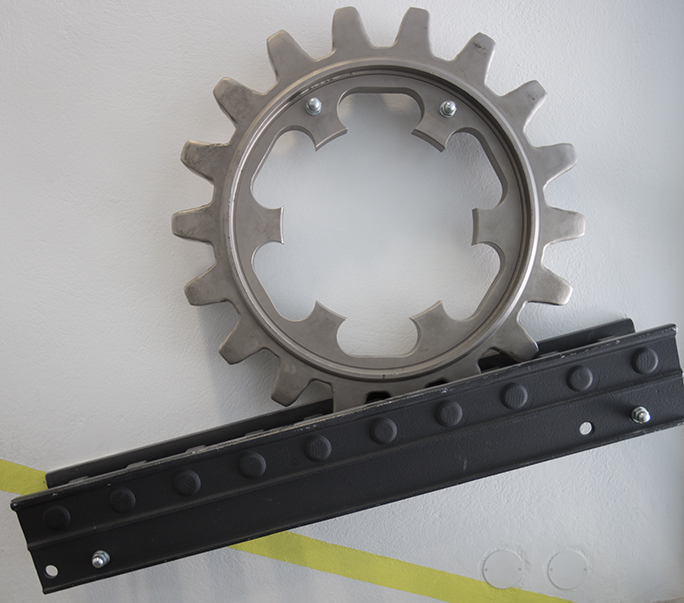 This is an actual rack-and-pinion gear/track mechanism on display at the Zugspitze building at the top of the mountain. The teeth of the pinion gear hold the train on the rails, and provide motive power to drive the train cars up and down the tracks.

At the end of the cog-wheel train trip, which travels for about an hour through a tunnel dug through the rock, we emerged at the ski lodge near the top of the mountain. Then we boarded a cable car which took us to the very top.

At 9,717.82833 feet elevation I took panoramic photos and regular photos of the Alps in a spread that seems to go on forever. I had my tripod and panoramic mount with me, and I used that for what I consider to be a “normal” panorama – 12 frames with my wide angle lens of the view. It’s breathtaking.

Then I decided to take a high-resolution panorama of the entire spread of the Alps before me. For that I used my telephoto lens, shooting 32 photos to capture a sweep of 270 degrees at the southern-most point on the building at the top of the mountain. I use a Really Right Stuff carbon fiber tripod and ball-head as my travel tripod, and it has degree markings on the base of the ball head. I planned my shot carefully and took a series of carefully-indexed images of the view from the balcony of the building.

Then, back in Munich, I stitched the 32 images together (I use PTGUI Pro for stitching) to make a 270-degree panorama of the German/Austrian Alps looking (mostly) south from the Zugspitze.

This panorama was taken from the top of the Zugspitze in southern Germany. It takes in the Alps from the German border, and looks southward into Austria. Click to see a larger version which is 3636 × 190 pixels, and then click on it again for the largest view. At the extreme left edge is the gilded cross that stands on the very peak of the mountain: 2,962 meters above sea level.

The resulting panorama is very nice. It is just under a gigabyte in size, and measures 24 feet x about 12 inches at 300 ppi at final resolution. I present it here in a reduced size to fit the web. It’s an interesting image, and I plan to print it out 24 feet long, as that will be an even more interesting image.