An adventure in the Distiller Time Machine

Way back in 2003 I wrote an essay for inclusion in an article in Pre magazine about using Adobe Acrobat Distiller with hot folders to get PDFs with specific settings just by dropping a source file into a watched folder in Distiller. At the time, source files were PostScript files generated by various applications as a method of going to print when one was not directly connected to a PostScript printer.

Almost no one knows about Distiller today, and there are only a few geeks like me who even remember that it exists. But, exist it does! And it still works.

Adobe keeps Distiller (almost) up-to-date. I have the latest version, one called Distiller DC (as opposed to CC?). I don’t know what the D stands for.

What is Distiller, and why on Earth do we need it? Distiller was originally the only way for a graphic artist to make a PDF from most applications. The workflow went like this: create a document in QuarkXPress, go to the Print menu, and “print” a file to PostScript. Take the resulting file and drop it on Distiller’s input window, after setting what kind of PDF one wanted, and a few minutes later a PDF would appear. Distiller is essentially a printer-in-software that makes PDF files.

[A more robust cousin of Distiller is embedded in Kodak Prinergy, Agfa Apogee, and other commercial prepress systems. It’s called the Normalizer, and its job is to pre-process PDF files (and a few other files types), making them ready for the rest of the trip through the system.]

Setting the stage for my trip down Distiller Memory Lane is a book that my students have created. It’s made up of 17 “chapters” each of which is four pages. Together, the book must be a complete work with consecutive page numbers, all printed as one publication. Using the Book function in Adobe InDesign is something I have done many times, most recently to produce ePubs. The Book feature is very efficient for ePubs because the resulting e-books are (nearly) automatically made with navigable tables of contents. 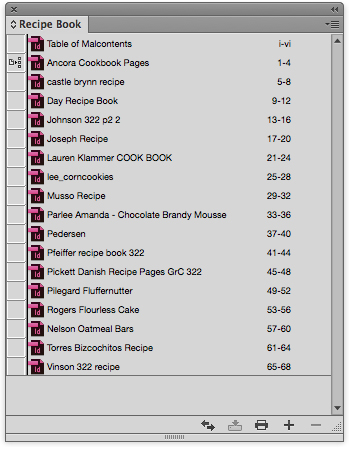 This is an InDesign Book. This palette shows all of the contributing “chapters” from which you can choose individual InDesign documents to open and edit. Whenever you want, you can tell the Book to synchronize its components, and it will reset page numbers. The second file down has been designated as the “master” chapter, from which the book gets all of its Paragraph and Character styles, and from which it derives its Master Page items, including page number format.

For our book project I imported all the Paragraph and Character styles from all of the students’ chapters into the first chapter. I also copied all of the type fonts from all the packages produced by the students to get them all into the first chapter’s Document Fonts folder, otherwise InDesign would not have been happy with the available fonts, requiring me to load them all each time I opened the book chapters.

You can Export a PDF from InDesign Books using all the usual PDF settings that are available in InDesign. I tried this technique and got a perfectly acceptable PDF of the entire publication. But I wanted to see if my 2003 hot folder technique still works, and so I did it a second time the old fashion way.

For those in production jobs, this technique can save a tremendous amount of time because various contributors can simply drop their files into a hot folder, and a PDF will emerge out the other end. It’s the files that can be difficult to get because (in general) we don’t use PostScript anymore.

You can print from an InDesign Book, and it was by this method that I produced a PDF from my students’ work last night. It was a long journey. 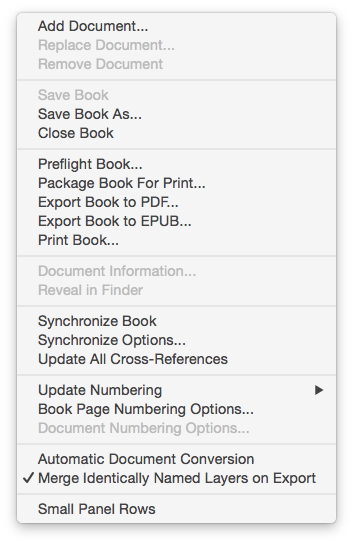 This is the fly-out menu from the Adobe Book palette shown above. Notice the Export Book to PDF, and other selections. I used both the Export to PDF and the Print Book tool to make a PostScript file that I later distilled to PDF using Distiller’s hot folder tools.

My method is to “print” my book, comprised of 18 separate InDesign documents (“chapters”) to PostScript. To those born after 1999, PostScript is a page description language that was created by Adobe Systems in 1984. It was the foundation of the revolution that unseated phototypesetting and put electronic publishing into our vocabulary. PostScript is still buried inside all of Adobe’s products – it is at the core of PDF, and it is at the core of the PDF Print Engine that is the controlling software on most modern printers and prepress systems. Think of PDF as a superset of PostScript.

Once the PostScript file was created, I tried two other methods for converting it to PDF. The first was to run Acrobat Distiller, and drop the file onto the input window of that application. The problem is that Distiller doesn’t support PDFx/4. I tried importing the joboptions file for PDF-x/4 into Distiller, but that had no effect. So my choices of presets were limited to PDF print options up to x/3. That wasn’t acceptable. I need PDF-x/4.

My second approach was to use the latest version of Acrobat to create a PDF from a file, one of its many (many!) functions. After first crashing, it successfully made a PDF, but again, I couldn’t choose PDF-x/4, so that didn’t work. (I think that Acrobat actually uses Distiller or its libraries to make the PDFs that it makes.)

I fell back on the technique I described in my article back in 2003, where I created hot folders for sheet-fed offset, newsprint, and screen display PDFs.

This is similar to the layout of the Hot Folders I created back in 2003. Each folder has an In and Out folder, and each has its own joboptions file that Distiller will recognize and use for processing the files dropped in it.

A Distiller Watched Folder is a folder that sits anywhere on your computer, and inside of which there is an Adobe PDF joboptions file, and In folder, and an Out folder. I created the basic folder, then told Distiller to watch it; Distiller then makes the In and Out folders inside it. I then copied the joboptions file for PDF-x/4 from the Adobe folder in my Application Support folder in my System files. This is the same joboptions file that is used by InDesign to make a PDF directly. 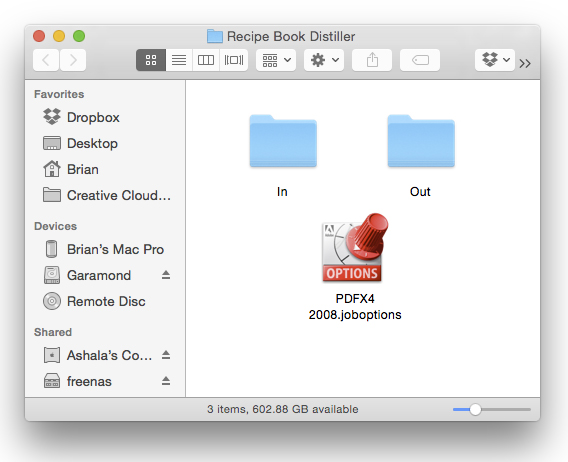 By using this technique I tricked Distiller, which otherwise offers no support for X/4 PDFs, into making an X/4 PDF.

Tomorrow I will attempt to impose and print the PDF on Cal Poly’s Konica Minolta C1100 digital printer.