Burning on a photowalk with Trey Ratcliff

I burned out on blogging early this year, and took a break. I thought it would only last a few weeks.

But here we are nine months later, and I am just now getting back to it.

While I was “away” (working, teaching, traveling, building things, etc.) I thought many times about topics I wanted to include in this blog.

My readership is now up to about 150,000 readers, and that’s impressive. I just hope that you have not lost faith in me.

In late summer my wife and I ventured again to Black Rock City in northern Nevada to attend Burning Man 2015. This year we knew how to navigate and what to do when it gets dusty (it got dusty a lot more this year than last). We did really well this year at getting to the events we wanted to attend, and we enjoyed ourselves a great deal more than we did last year (though we enjoyed ourselves last year too). 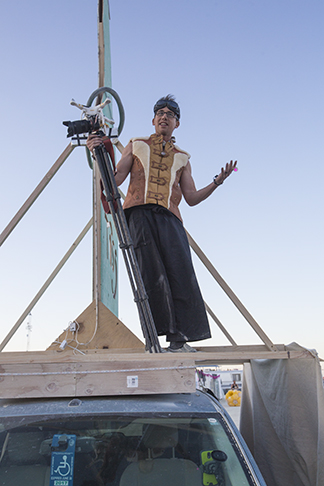 This is Trey Ratcliff doing his sermon on the roof of a truck at Burning Man.

Sunrise on the Playa is my favorite time. The light is fabulous, and the art installations are simply amazing. There are always people out there, many waiting for the sun to rise to illuminate their mornings. Some have spent the entire night out there (we did not do this, opting instead for the comfort of our RV).

On Tuesday evening this year I joined Trey Ratcliff, a very well known photographer who leads a series of quite popular Photo Walks in cities all around the world. His Burning Man Photowalk started at 7:00 p.m. that evening. 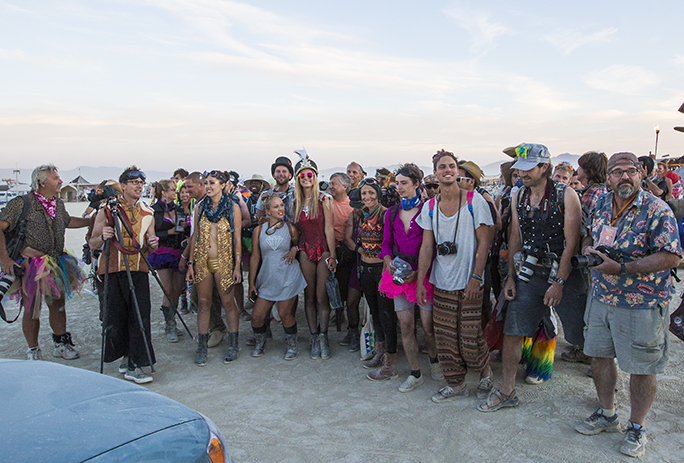 Trey (second from left), with his followers in Center Camp. We were getting ready to take one his famous Photowalks.

I had never met Trey (and though we did say “Hi!” in passing, I still have never really met him). I was curious. He is a charming young man with a great eye, and a great attitude about photography. I like his style, and I was especially impressed by Trey in person. He led an impromptu “sermon on the roof” of a van in Center Camp, surrounded by about 50 photographers. We ranged from the battle-hardened pros with multiple cameras and years of experience to those who were there just to rub photographic elbows.

I fall somewhere in between. I had two cameras and four lenses with me on the Photo Walk. Everything was stored in water-tight nylon bags (that I bought on Amazon). Everything I wasn’t carrying around my neck was in my backpack to keep it away from the Playa dust. This made changing lenses a bit hard, but it saved me some trouble cleaning the equipment after I got off the Playa.

Two of the “seasoned pro” variety with their equipment on the Playa.

Trey is a golden hour photographer, preferring to take photos at the time between dusk and dark. His work reflects this passion. His camera at Burning Man was a new Sony Alpha with its phenomenal ISO range. It’s possible to take photos in the dark with that camera. I followed with my Canon 5D Mark III, and a Canon T2i, a little older but still effective camera for late-day photos. I ended up using the 5D most, because it has better low-light capabilities.

Trey is charismatic, and his followers hang on his every word. I had the most fun photographing the photographers as they listened to him, and as they took their own photos. As it got darker, the opportunities for photography faded away, though there are still many things to take photos of in the dark at Burning Man. An hour into the Walk I returned to Center Camp to join my wife for a performance by a couple of youthful singer-songwriters on stage there. The more faithful continued on with Trey in the darkness, walking out to the center of the Playa where The Man (called the Souk) is located. 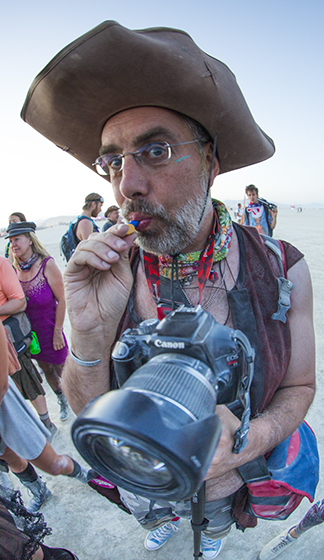 One of my fellow photographers in the Trey Ratcliff group. Notice the Playa dust on his camera. It is impossible to avoid the dust, but fortunately it’s easy to get off.

An old adage among pro photographers is some variation of “f-8 and BE THERE!”

This is especially true at Burning Man. If you want to take good photos, you must be prepared to ride a bicycle in a blinding dust storm while taking photos with one hand, the other on the handlebars. You must be willing to get up at 5:00, and to stay up very late at night to get the most interesting images. I am much better at the former than the latter. 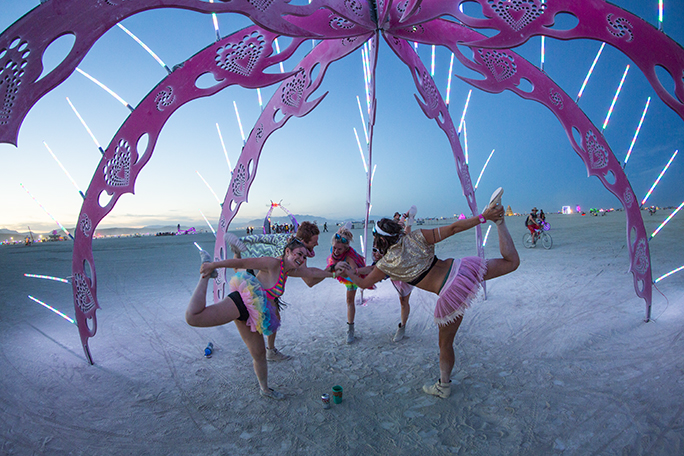 …and this is an unposed photo I took of a group of four young women on the Playa. They were standing inside one of the many art installations along the Esplanade.

Some photographers worry about the dust on their camera equipment, and indeed, the dust is awful. It’s an alkaline mix of salts and a tiny amount of abrasive silica. The dust has the consistency of talcum powder, or for those in the graphic communication world, toner. The dust is so fine it gets into cracks and crevices that you will never reach to get it out. But, pay no attention to the dust! Take great photos!

Trey talks to the group as the sun went down.

In my second year of Burning Man I again treated the cameras as expendable (though they are not). Cleaning the exterior of a Canon 5D is easy; use a damp washcloth and wipe the dust off. Canon’s water-tight seals on this camera (not on the less expensive T2i) keep the dust out, and as long as you don’t remove a lens in a dust storm, the cameras will survive.

Even cleaning the glass surfaces of the lenses is no big deal. I have clear glass filters on my lenses, so I just wipe them clean with a lens cleaning cloth that I ALWAYS have in my left-rear pocket. Even if I wreck a filter, my lenses will be OK.

I took my usual several thousand photos, and I got a lot of nice images. I have made a modest gallery of a couple of hundred images that I invite you to see (it takes a few minutes). These have been edited down to eliminate duplicates and to concentrate on those I liked best. I hope you enjoy these.

And, to my photographer friends at Burning Man: nice work! I have seen many images taken by others that I consider much better than my own. I still have a thing or two to learn about taming the Nevada desert to take the best possible photos.