Shooting 100 60MB photos every second
with the Red Dragon

For years I have been following the development of the digital video company called Red. They made news first at the National Association of Broadcasters event in Las Vegas, Nevada, in 2006. At that show they introduced the world to the concept of very high resolution digital video, and the concept of working in camera raw in video, similar to the way that still photographers used their digital SLR cameras. 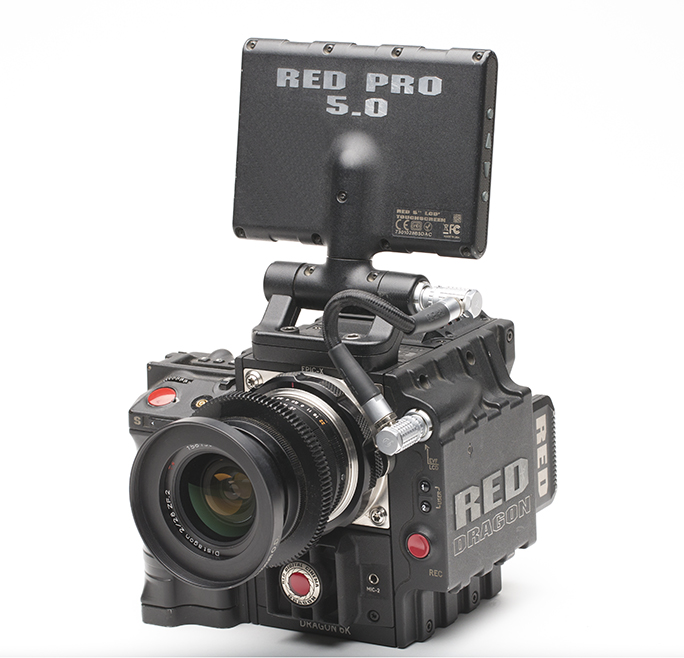 This is the Red Dragon. It started its life as a Red Epic, but was recently upgraded to the new Dragon sensor, new electronics, and new cooling fans. One of the most impressive things about the Red cameras is their forward-looking engineering, which allows such upgrades. Fitted on the camera was a Zeiss Distagon lens. For the photo shown we substituted a Canon 100mm macro lens.

The company was founded by Jim Jannard, the founder of Oakley sunglasses. He put together a team of scientists, engineers, designers and cinematographers who were interested in taking the movie industry out of the film era and into the digital era. The movie industry was skeptical, to say the least. Film was entrenched, obviously, as the medium for making high quality motion pictures and television shows.

But, just as digital still cameras captured the imagination of photographers, digital video piqued the interest of many cinematographers who agreed with Mr. Jannard, and those pioneers chose to start making films entirely on digital video. The benefits were many, including reducing the cost of shooting, ease of use, speed of viewing dailies, and the ability to step directly from the original video to the special effects computer without having the digitize the film.

Another benefit of digital video is the dynamic range of the sensor in the Red, and competitive cameras. Film, under the best of circumstances, can retain a tremendous amount of information in a tonal scale. Usually this is measured in “stops” which is a relative expression of exposure (One “stop” is a doubling or halving of the amount of light that strikes the film or sensor relative to the previous value). If one simplifies it to mean how many “stops” there are between a detailed highlight and a solid black, film usually comes in at ten or 11 stops of exposure latitude, less if the film is “pushed” to a higher sensitivity, or if any compression of imagery is done with filters (this is often done to create a “look” of a certain era in film). 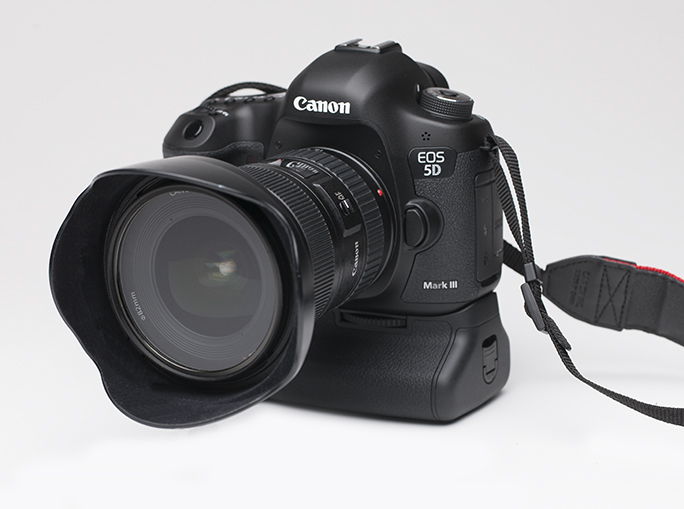 The Canon 5D Mark III camera with optional battery grip. This was the other camera we used for the experiment in still photography. This camera is capable of shooting video, but we did not use that function in this example.

(This argument gets a lot of press, so I expect film lovers to start sending hate-mail when I say the following.)

Digital sensors were really lousy in 1995; they couldn’t compare with film under any circumstances. Much has happened since then. New CMOS sensors from Sony, Fuji, Canon, Nikon and Red (just to name a few) have continued to improve while film has continued to stay the same (no improvement in film has occurred in decades). The sensor on the newest Red camera, the Dragon, claims a dynamic range of 16.5 stops. That’s very significant, as it allows cinematographers to shoot directly into the sun while maintaining the ability to record information in the shadows at the same time. With four-plus stops of additional dynamic range, cinematographers are free to make more complex shots that take advantage of extremes of lighting. And, much higher ISO (sensitivity) values can be achieved with these digital sensors than film can ever hope to attain (“fast” film is rated at ISO 320; the Dragon goes up into the 2,000 ISO range, about four times more sensitivity without introducing significant digital noise into the image).

Martin Scorsese hates digital, calling it all kinds of names, and predicting that it will bring about the end of the movie industry. Sorry, Martin.

Many other directors love digital because it gives them more opportunity for creative exposure, higher ISO sensitivity, and massive amounts of real resolution (much more than 35mm film, but not as much as 70mm film) that can help them with special effects, cropping, and smoothing of shots when hand-held becomes too rough for even the crazy-action filmmaker. Another benefit of digital cinema is that you can shoot in camera raw, allowing for decisions like “look,” tinting, conversion to black and white, and much more, to be done after the shoot, and not in the camera. Complex sensitivity adjustments (curves) can be made to digital files that would be destructive to scanned motion picture film. 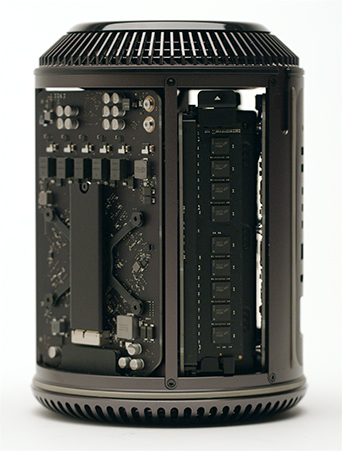 This is a still photo from the Canon 5D of a Mac Pro cylinder computer, showing the internal SSD storage on the left, and one bank of RAM on the right. This photo was taken with the Canon camera.

Another force to be considered is the rapid conversion of movie theaters to digital projectors. Directors like Scorsese are having a hard time demanding film as the industry moves away from film for final presentation. This requires purists like Scorsese to convert their film productions to digital to be distributed, and that makes him crazy. (I LOVE digital projectors in movie theaters because the colors are brighter, the images much sharper, and there is no image-shake, the effect of running film through worn-out projectors.) The titles sit still as I read them, and I really like that. 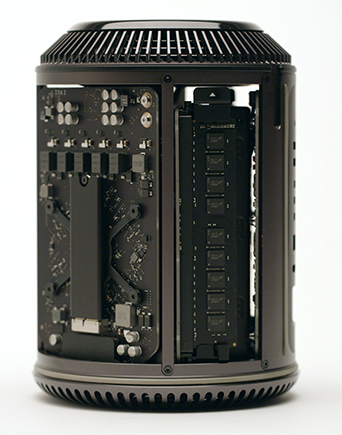 …and this is the same computer photographed with the Red Dragon. This is a still frame from video shot at 24 fps. The still photo was about 58 MB in size.

For anyone who has ever enjoyed the benefits of the Camera Raw filter/application in Adobe Photoshop/Lightroom, the same tools – and others specific to motion picture production – can be enjoyed in a raw workflow in digital cinema.

Some still photographers are now using cameras like the Red to shoot stills. They shoot a range of motion, then pick-through the individual frames to get their favorite stills. Then, those stills are captured and prepared for print.

I decided to try this for a recent still photo assignment. I shot side-by-side with a Canon 5D Mark III and a Red Dragon digital video camera. Though the work flow I used is not optimal, I enjoyed seeing how nice the still frames are from the Red, and how well it can handle the task of “still” photography. 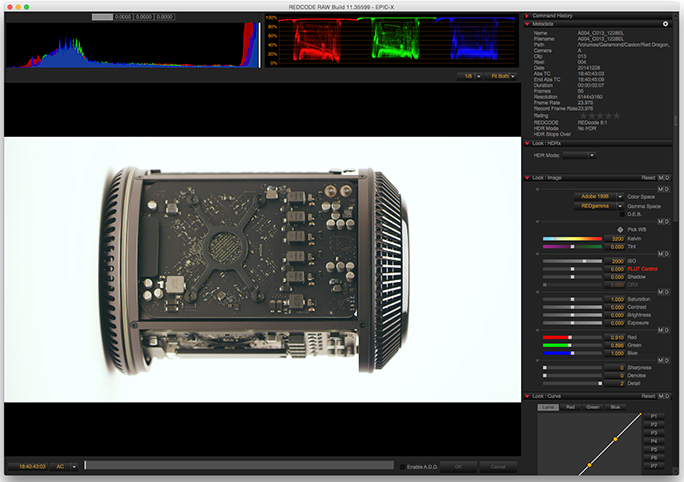 This is a screen capture of the REDCODE plug-in for Adobe Photoshop. This software allows for the viewing and selection of images from Red cinema footage. On the right are various controls for color temperature, ISO, color balance, and more. If one scrolls down in the software there is a three-point color corrector interface and additional controls.

The Dragon is a beast. It’s quite heavy compared to the already-heavy Canon 5D. I used a Really Right Stuff carbon fiber tripod for these experiments because I wanted to see each camera do its best on a solid platform.

For lighting, I put the Dragon at a disadvantage. I used strobe lights, which are incompatible with digital video. With my son Patrick at the controls of the Dragon, we used the modeling lights of the strobes as our only light source for the Red. The results were quite nice in spite of this disadvantage. I would shoot a series of stills on the Canon, then Patrick would duplicate those stills, using the same Canon 100mm f2.8 Macro lens, on the Dragon. If I do this kind of test again, I will shoot under incandescent lights for both cameras.

Later, using the Redcode plug-in for Adobe Photoshop, I opened the video sequences and captured a still from each selection. The Red plug-in for Photoshop is very similar to Adobe Camera Raw in that it allows for adjustments in exposure, color temperature, tint, contrast, clarity and much more.

Each still frame captured from the Red Dragon is 58.2MB in size, where the Canon 5D is 66.3MB. These two sensors are very similar in size, though the Red’s is slightly smaller. The Dragon’s resolution in the horizontal dimension is slightly higher (6144 px vs. 5760 px). What is truly amazing about the Red Dragon, and similar digital cinema cameras, is that the camera can capture 100 frames per second at this resolution, a simply astonishing amount of information. At high speed, the Dragon can shoot slow-motion at up to 300 frames-per-second (the resolution must be reduced to 2K for this).

I am not a seasoned videographer, though I have worked in video in the past. To understand the full capabilities of this astonishing camera, one must also understand the complete Red work flow, which requires huge, fast hard disks for storage and a very capable computer to push that many pixels around at such speeds. Of course those who work in Red Raw can benefit from working at lower resolutions during production, then rendering their final work at the end of their projects.

And, like digital still photography, a raw work flow allows producers to change the color temperature, the contrast, etc. on the raw images, and then change their minds to do it differently without having to re-shoot their work.

I plan to do more extensive tests to compare the Red Dragon to my Canon, but time only allowed this one proof of concept at this time. More later!

Some raw resolution statistics for comparison: