As you might have read in my earlier blogs on the subject, I installed solar panels on my roof in the fall, finishing in late November. I bought the panels, racking and hardware and did the rooftop installation myself. This was a way to save a little money, and also I like projects like this. It was an educational adventure and a home improvement project, and I love both.

Installation was reasonably easy. I installed two permanent stainless steel roof anchors on my roof, I bought an OSHA-approved safety harness system to prevent falls, and I climbed up there and put in the brackets and flashing and the rails. Then I installed the inverters (my system uses individual inverters) and the cabling, and finally I installed the panels themselves. 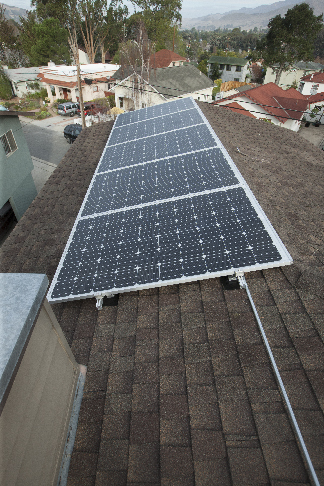 I enjoyed the process of making precise working drawings to give to the city to get my building permit. I enjoyed the work on the roof, and I did it all myself. When it came time to lift the panels to the roof I engaged the help of my friend Eric Johnson who lent a hand to get the panels hoisted up and then in place on the racking. Solar panels are not heavy (about 40 lbs. each), but they are awkward (about 40 x 60 inches in size). 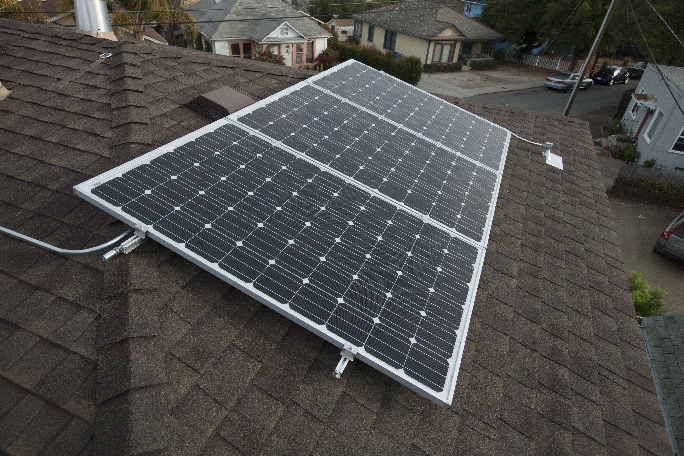 Three additional panels face southeast, catching the morning sun. You can see the roof jack on the right, where the electrical wiring goes down through the roof to the garage, and eventually to the load center.

In January I hired an electrical contractor to make the run through the roof and down the outside wall and into the garage, where he and I pushed through the wall into the back of the electric load center. There, my contractor friend installed a 20-amp breaker, then we pulled wire from the box to the upper roof, and he completed the wiring of the panels there. 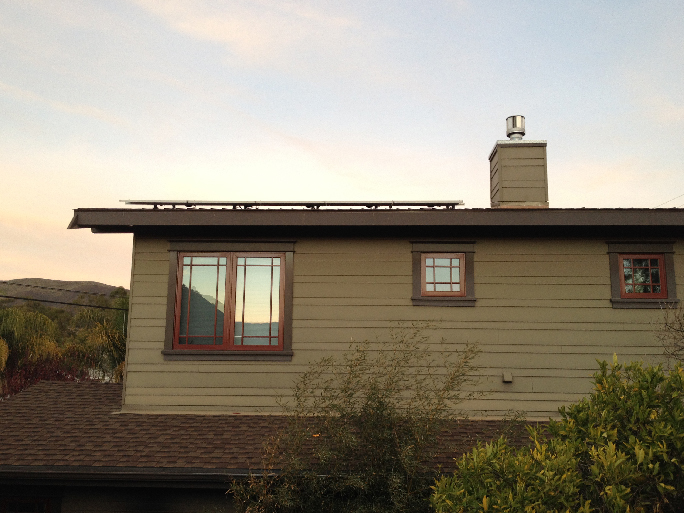 Not an eyesore: the panels, as seen from the neighboring apartment building. The slope of the roof, and the altitude of the roof make the panels all but invisible to my neighbors.

On January 11, the building inspector checked our work and signed-off on the permit, declaring it to be complete. This signed building permit was submitted to our electric utility, along with a long Net Metering application form. Normally, I was told, this takes just a week or two. The electric company installs (or modifies) the electric meter, making it capable of going both directions. Then the electric utility sends a Permit to Operate, which allows you to turn the system on. If you turn it on before receiving permission, it can potentially put utility workers are risk. In my case, it took two months.

Despite their public exhortations, our public utility is not keen to have citizen power generators. They tolerate us, but they are not happy about it. Every kilowatt-hour of electricity I make with my solar panels takes money out of their pockets, and that does not please them. It’s not that they don’t want the power, they do. But, they are in the business of making money by selling electricity. They provide the wires and the poles and the transformers, and it’s anathema to them to have citizens making their own electricity (and not paying as much for that infrastructure as their neighbors do).

I am of the opinion that electricity should be generated where it is used, especially in areas like mine where the sun shines all the time. Rooftop solar systems are the perfect solution to power shortages and brown-outs. The socialist in me says that all new construction in southern California should be required to have rooftop solar panels, and all major remodeling projects should require some solar to be installed. If every house in my city had eight solar modules on the roof, as I do, the local electric bills would drop very significantly.

In the first day of operation, my system saved me $3.997. That’s a tremendous amount of money. Most homeowners wouldn’t get the same savings because they are not in the electrical tier that I am (our home office uses a lot of electricity, pushing us into the fourth tier of electric usage charges). But even at the low tier, the average homeowner in my city could save about $1.54 every sunny day with just eight panels.

But, it’s 117,000 kWh of electricity available when it’s sunny and hot, when air conditioners are turned on, and when the threat of brown-outs and rolling black-outs looms over the region. It would allow PG&E to sell that much energy to other communities in the state.

Here I was at the moment of truth: 10:40 a.m. Friday morning, I flipped the switch to activate my solar system. What a thrill! Notice the red and yellow warning stickers on the electrical box; they tell interested parties that the system is energized from both sides.

This last Friday, at 10:35 a.m., I finally received my Permit to Operate. Five minutes later, in a small but very impressive ceremony at the load center on the wall of my garage, I flipped the circuit breaker to the on position, and my system started generating electricity.

In the months since it was ready to operate and that day, I could have generated about $240 worth of electricity. What a shame!