I shipped my GigaPan rig and my Really Right Stuff carbon fiber tripod in my checked luggage to Hong Kong. My hope was that I could make a couple of beautiful panoramic images of the Victoria Harbor with Hong Kong in the background. Since I was staying at the Kowloon Hotel, which is just three blocks from the ferry boat landing, I could get there on foot without difficulty.

I have seen several panoramic photos from the top of the tram, looking down on Hong Kong, but that view didn’t interest me. Instead, I wanted to make mine a water level image of the amazing cityscape that faces Kowloon. 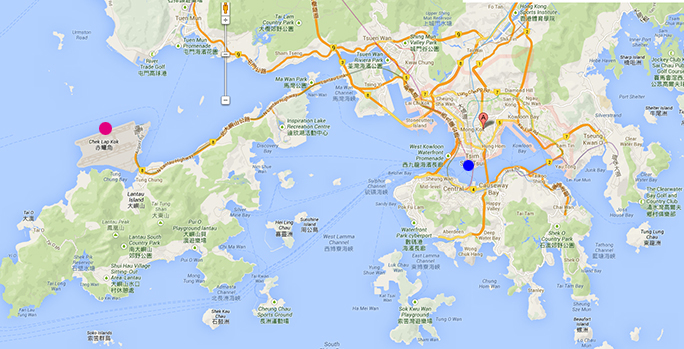 This is a Google map of the Hong Kong area. The blue dot is the location of my camera for the panorama; the red dot is the airport.

The geography: Hong Kong proper is called Hong Kong Central, and it sits on Hong Kong Island. Separating that island from the mainland is a strait called the Victoria Strait, which runs approximately east-west. On the north side of that strait sits the area called Kowloon. The entire region is called Hong Kong, and that area runs north to the mainland Chinese border along the Shenzhen River. Hong Kong was reunited with China in 1997 after 155 years as a British colony. China allows Hong Kong to run as an autonomous region, with its own government, laws, trade relations, and policies.

My sunrise photo of Hong Kong Central from the waterfront park in Kowloon. The early morning sun was my worst enemy, but the photo is still interesting. Had I waited an hour or two I could have a better photo, and I would have missed my flight to San Francisco. Click on the photo to go to GigaPan.com to see the high-resolution version.

When you look at Hong Kong in Google Earth you will see that it is an area of dense metropolitan areas surrounded by open spaces, parks and farm land. Just across the river to the north is Shenzhen, an industrial colossus with 10.3 million inhabitants. Shenzhen is the manufacturing hub of southern China, and it’s where goods for export are made, and it hosts one of the busiest container cargo ports in the world. From the satellite view, the world turns from green to concrete on the north side of the Shenzhen River.

Hong Kong Central is one of the densest metropolitan areas in the world. The number of skyscrapers in its very small space is amazing. And, from across the strait, its skyline makes for dramatic photos.

The beginning of the week was marked by cloudy skies, though I did manage to shoot a “regular” panoramic photo (with just 12 frames) with my Canon camera. After the first day, though, we got rain and dense clouds as a result of the typhoon that struck the Philippines. Though I kept going out to the harbor to look, it was almost always unpleasant weather. And, my daytime activities kept me away from photography, so I didn’t get any chances to shoot during the days.

On the night we returned from mainland China, I picked up my suit (described in an earlier blog) from Khan the Tailor, then returned to my hotel, and joined my colleagues for dinner. Then, after dinner, I set up the GigaPan and tripod, grabbed my camera case, and hiked over to the lovely waterfront park that sits at the base of the Kowloon district. The night was perfectly clear, so I shot a 363-frame GigaPan photo of Hong Kong, ending at midnight. Then I went back to the hotel and started packing.

I planned a daytime GigaPan for morning, but I had very little time in which to get this done. I had to be at the airport by about 10:30 to check in for my flight two hours later. Getting to the airport in Hong Kong is a breeze, though. The city’s high speed train whisks you from Kowloon to the terminal in just 23 minutes, and it runs at 12 minute intervals, precisely. From the hotel to the train station was also easy, as there are free shuttle buses to get you there in minutes.

I worked out a schedule that allowed me just over 30 minutes to take the GigaPan photo. It would be shortly after sunrise, so the sun would be in the photo, but I had no choice. I had to do it. I wolfled down my breakfast, dashed up to my room, grabbed the camera gear and headed back to the exact spot on the harbor park to take my morning photo. The sky was blue, the sun bright on the eastern end of Hong Kong Central, and the light on the western end was lovely. I set up an almost identical photo, in the same spot as the one I had done seven hours earlier.

363 frames takes about 35 minutes, so I started the GigaPan and my camera to capture the morning. The harbor was bustling with water taxis, ferry boats, fishing boats, and the occasional barge. I paused the GigaPan device twice to allow a large ship to transit my view. And I wanted to capture at least one of Hong Kong’s famous Star Ferries. These are the charming double-ended boats that carry people across the strait between Kowloon and Central many times every day.

Making GigaPan images with moving water can be challenging. There I was, standing just feet from the water, and with water taking about one-third of my total image, I forged ahead, figuring that I could fix it in Photoshop after stitching, and that I did. It was surprisingly easy. I had to remove one small fishing boat that got caught between two frames and became a blur. Otherwise the photo turned out well.

I find that all of my GigaPan images need some hand work to perfect them. The problems caused by making rows of photos horizontally, over a period of a half-hour, create some curious image defects. Light changes, shadows change, surfaces change their character over that half-hour, and it’s usually necessary to clone a bit here, and touch-up a bit there. This photo has minimal retouching.

I also find that adding some saturation to my GigaPan images makes them look better. That, and a small increase in contrast added with a Curve adjustment layer make these images more attractive. I did both to the Hong Kong photo.

I got my photos taken, I rushed back to the hotel, repacked the GigaPan and tripod (wrapped in bubble-pack), and headed to the airport. From the door of my hotel to the boarding area at the airport took me just one hour and five minutes. As I sat in the terminal area waiting, I was wishing I had spent a little longer taking the photo, or perhaps having another swig of orange juice at breakfast. I had time left over, and that always leaves me wondering what I could have accomplished.

After an almost 11-hour flight back to San Francisco, and an unfortunately long layover there, I made it home with all of my gear intact. I transferred the images to my computer, started GigaPan Stitch working on the images, and went to bed. Twelve hours later I awoke to see the daytime panoramic image finished, and it was worth the effort.

I’m still working on the nighttime image. I’ll post it in a separate blog if it turns out nicely.