If you have followed this blog for more than a couple of years, you know that I am an Eagle Scout. I earned that honor at the age of 15 in Troop 206, Oakland, California. I was one of the first three or four Eagles in our troop, a troop that has spawned many who have reached Scouting’s highest honor.

I was really into Scouting, and was involved well into my 40s as a Scout, a camp counselor, and ultimately as an Assistant Scoutmaster in the county where I now live.

I attended one World Jamboree and one National Jamboree. These are the biggest campouts you will ever see, with tens of thousands of boys in attendance.

In 1967 I was chosen to be part of the World Jamboree Host Corps, a troop of about 50 young men who arrived early at the Jamboree – held that year at Farragut State Park in Idaho, USA – and acted as hosts to the arriving Scouts, leaders and dignitaries who were part of the event. My job was to help produce the Jamboree Journal, a newspaper that was produced by us Scouts with adult help every day of the event. I went out on photo assignments, wrote stories, and helped paste-up the newspaper. It was printed each night in nearby Coeur d’Alene, Idaho. 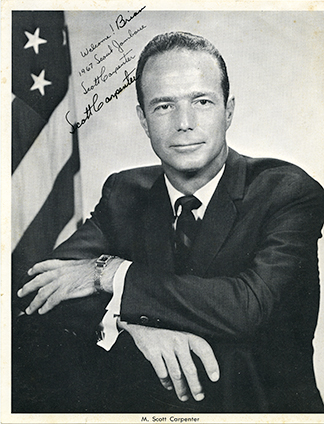 Commander Carpenter added my name and his actual autograph to a pre-printed PR photo that he gave me on our day together in 1967.

One day, when I arrived at the newspaper tent, I was told by my adult supervisor that I would be accompanying Commander Scott Carpenter, the Mercury 7 astronaut, on his tour of the World Jamboree that day. I was thrilled, and jumped at the opportunity.

Mr. Carpenter and I walked from camp to camp, admiring the handiwork of the visiting Scouts, and we enjoyed meeting visitors from around the world. It was one of the most exciting days of my life. On our day together, we talked about his flight into outer space, his service in the Navy, and about my aspirations and plans. He was attentive, kind, and gracious.

We were trailed by news reporters the whole day, everyone asking for a quote or a photo, and Carpenter, a true gentleman, offered up many opportunities. At one point, a UPI photographer and reporter asked if he could photograph the two of us as we had a bite to eat, and we complied. His photo of me, and an accompanying story penned by one of my youthful colleagues, appeared on the UPI “wire” the next day. 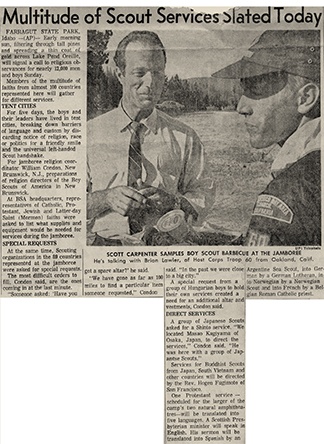 That’s me on the right, a member of Jamboree Host Corps Troop 60. Commander Carpenter and I had spent the day visiting the various camps of the 1967 World Jamboree. The story that accompanied the photo was about the many religious services available at the Jamboree that week.

The photo featured me and Commander Carpenter at lunch. Someone who knew my parents sent a copy of the Boulder, Colorado, newspaper which printed the story the following day. I kept that photo, along with all of my copies of the Jamboree Journal which I helped to prepare, in a box in my house. I took it out this past weekend when I learned of the death of Commander Carpenter on October 10.

It was Carpenter who said to John Glenn on his launch from Cape Canaveral on February 20, 1962, “Godspeed, John Glenn!” We have all heard the recording of that message in movies and in television reenactments of the space program. When I hear those words I remember my day with the man who spoke them.

He was a fine man, a great influence on young men and women, and one of our finest astronauts. It was an honor to have spent the day with him back in 1967, a day I will always remember.