Three-color photography on a boat

Fourth of July – afternoon. The conversation ranged from the oil in the Gulf of Mexico to the freshness of the guacamole. At some point someone made the mistake of asking what I had been doing recently. I told this person about making three-color photos with my digital camera and red, green and blue gelatin filters.

I “just happened” to have the filters with me.

After some discussion, I set up a shot with my friend Chris, my camera on a tripod, and with Chris’s wife Rebecca standing-by with my three gelatin filters, ready to hand them to me in rapid succession. 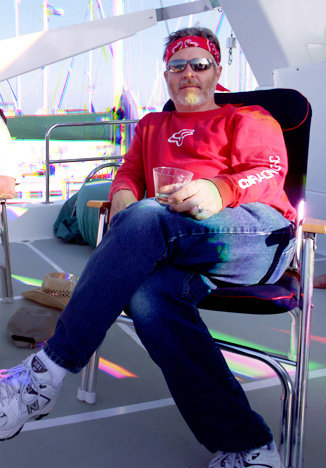 My friend Chris photographed the same way the Prokudin-Gorskii would have done it in 1912. This was made with three separate exposures, then put together in Photoshop. Notice the small errors of color that exist in the sunlight on the deck, and the boat in the background. These differences are caused by time-between-frames.

I put the camera on “monochrome” and asked Chris to sit very, very still. And, as other friends laughed about what we were attempting to do, Rebecca handed me the gels and I snapped three photos as quickly as I could.

Meanwhile, the boat rocked very gently in its slip. I didn’t think this would work, but it did. 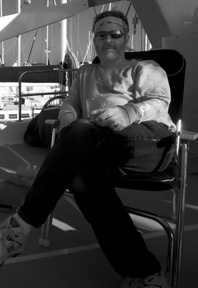 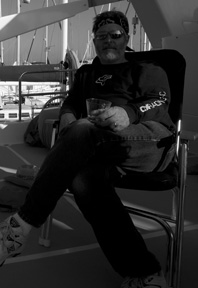 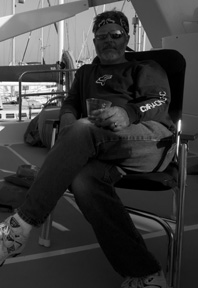 These are the individual frames – red, green and blue – of the color photo.

My color image of Chris, sitting in a deck chair, is delightful; he sat very still as instructed. The result is excellent. If you look closely, you will see that all movement in the background is shaded by magenta, yellow and cyan misfit parts. But Chris sat still and the image of him is good.

As I described in my initial blog on the topic (three blogs back), the objective was to try to replicate the work of Russian photographer Sergeii Prokudin-Gorskii, who made photos of both stationary and slightly-moving objects (rivers, people trying to stand still, etc.).

I plan to make one more series of photos using this technique in a photo studio with strobe lights and a model. If these turn out nicely, I will post them here. If not, I’ll not bring it up again. So, don’t hold your breath!